After reviewing my earlier posts, I resolved to do better at taking ordinary street shots.  There's no way to actually capture the feel of this city -- the heat, the smells (good and bad), the insanity of traffic that doesn't yield or brake for pedestrians (tourist and local alike).  But pictures of the ordinary street scenes can (I hope) convey the gist of the place.

The Jardin Majorelle is in the new city (built up around the old walled medina) so we took a cab out this morning.  He dropped us on the side of a busy street and pointed to the sign -- on the other side of the street -- indicating the way to the garden's entrance.  Interesting, we thought, that the cabbie would leave us to cross a street that he, himself, was unwilling to brave as a lef-hand turn.  After a few daunted minutes, we gathered our lives in our hands and dashed across, dodging motorcycles and cars.  We didn't die. 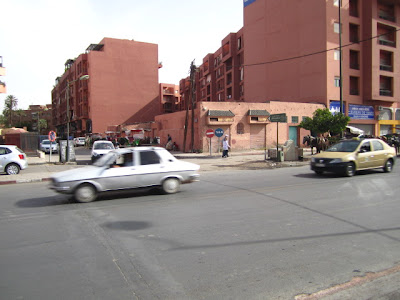 After visiting the garden, we strolled through more of the new city in search of a place to eat. 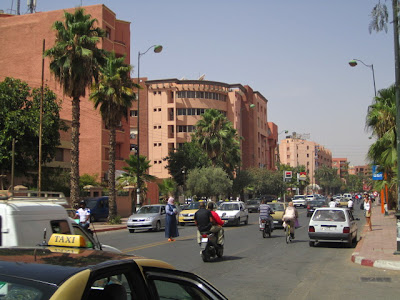 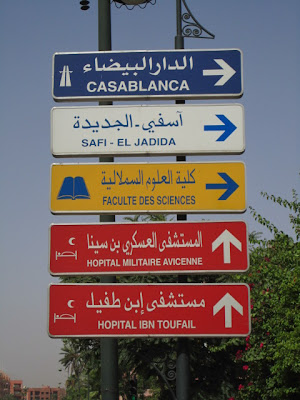 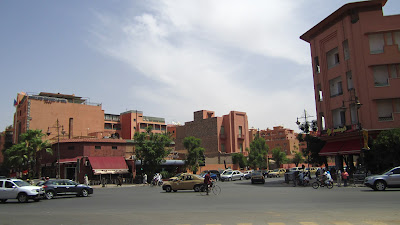 After a while I had to stop and buy a watch.  My last timepiece -- an el cheapo from Target, which I'd gotten before my Peru trip last summer -- stopped working a few days before leaving for Madrid, and I'd been feeling naked ever since. 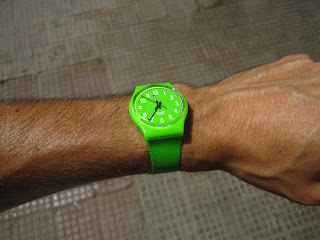 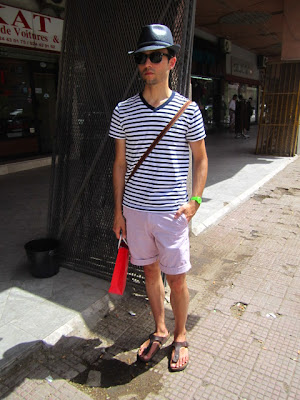 Back to the Medina

With newfound confidence in my ability to make and keep appointments, we continued on our way.  We found our restaurant (which was closed), had a bad lunch in the neighboring cafe, and then returned to the medina, which is much more colorful and chaotic charming than the new city.
﻿ 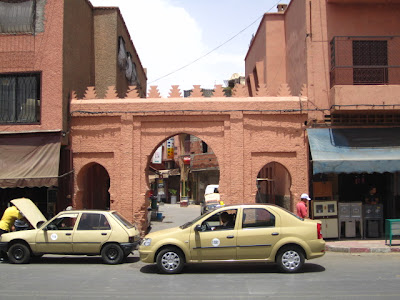 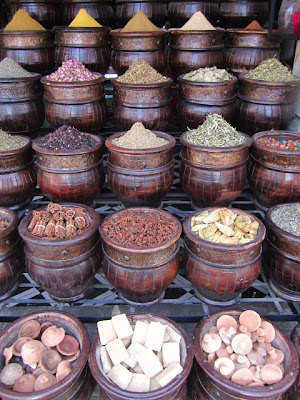 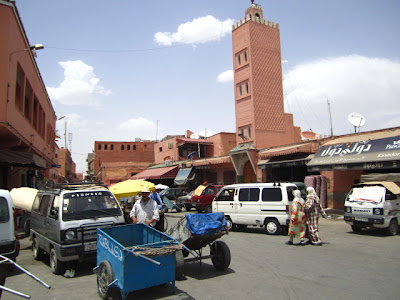 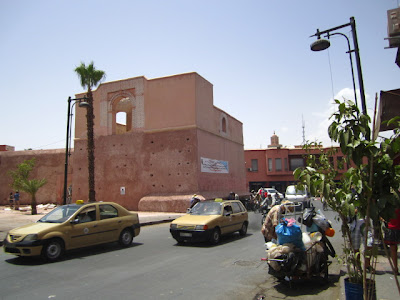 The weather, of course, was still extremely hot.  When we checked the weather at 8:30 in the morning, the current temperature had been 115 F, with a predicted high of 122 F.  I've loved every minute of this heat, but Amanda has been feeling a somewhat afflicted.  (I do think she's making progress, though:  Today she demonstrated a newfound ability to distinguish between "how hot it is now" and "later, when it's even more unbearably hot".)  When she started reminiscing fondly about how, only a year ago, we had been on the verge of freezing to death on the shores of Lake Titicaca, I offered moral support with a short pep talk:  "Hey, at least we aren't in the middle of a sandstorm!"

Naturally, it was only moments until the winds picked up and we found ourselves in the midst of such a sandstorm.  [Me: rueful sigh of irony; Amanda: meaningful silence of "now look what you've done"]

Amanda followed the example of the local women and covered her entire face with her scarf.  I, on the other hand, walked with my eyes closed, tried not to breathe, and prayed that I wouldn't wander into the middle of the street (where all the moped drivers had also closed their eyes -- without bothering to stop their mopeds).

The moral of this story is that I need to be careful about how I comfort Amanda in this heat, lest I call down further calamities upon us.  I mean, I could have said, "At least we haven't been stranded on a mountainside in the Andes!" or "At least we haven't had a frothy pink drink of doom!"
Posted by JJD at 2:47 PM

LOVE the florescent green! And those pots full of spices, etc... I'm in love. I would love to have my kitchen look like that!