Marrakesh, Day 3: Shopping in the Souq (or, I'm a Berber)

Marrakesh is famous for its souqs -- the warren-like covered markets that sprawl through the heart of the old city.  They've been there for centuries and are still going strong.  While many of the shops clearly cater to tourists, many also offered ordinary, every-day items -- and most of the people we saw were not Western tourists.  The souqs are exactly what you'd expect them to be:  busy, chaotic and disorienting, full of treasures and trash and everything in between, a sensory overload of smells and colors and people.  They're awesome. 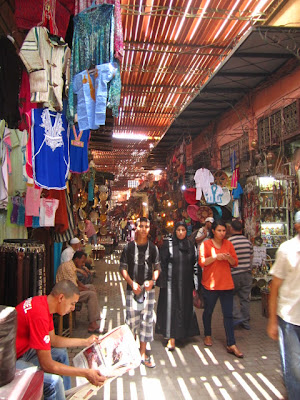 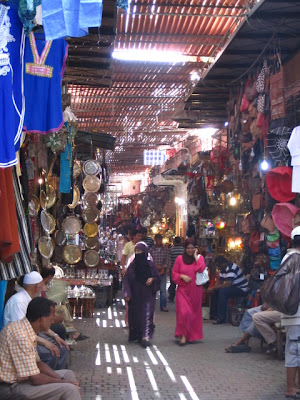 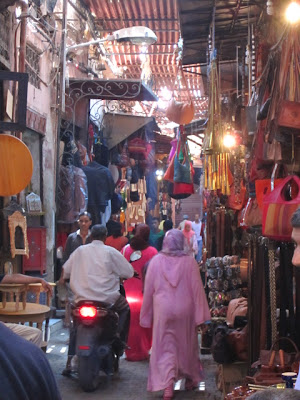 Amanda and I had wandered through a corner of the souqs on our first day in Marrakesh to get a sense of what they were like.  Today we dove in head first, on a mission to find the best rugs, lamps, blankets, and textiles we could find, bargain hard, and get out in time to ship everything back to the States.

We started with Berber wedding blankets -- they're immediately identifiable by their simple white on white color scheme (with occasional colorful embroidery) and shiny sequins.  They're worn by Berber brides on their wedding day, and the sequins are meant to protect the bride from the malefic influence of the evil eye.  I've had my eye (which isn't evil) on them for a while now (they're all the rage in the design world right now), so I was excited when we came upon a shop that had a ton of them on display.

I walked up and started inspecting.  The proprietor approached and started helping.  He was a young guy, only two-weeks' married himself, and friendly.  The first thing he asked is whether I was a designer.  He said he does a fair amount of work with local designers and occasionally sources blankets for clients in London, and apparently the way I was dressed made him think I was a designer.  (Which of course completely validated my green watch and striped hat with a feather.  In the background I could hear Amanda muttering, "Great -- now compliment his handwriting and he'll buy the whole store.")  The second thing he asked is whether I was a Berber.  This was after I had sifted through about thirty different blankets and narrowed them down to only a few.  We'd started haggling over prices, and he felt I was driving a hard bargain.  (Whether it was actually a hard bargain or not is debatable, but I was gleefully playing with some of the negotiation tactics I've been trying to hone over the last four years as a lawyer.)  Apparently Berbers are known for driving hard bargains.  Bebers and Scots.  I confessed my lack of Berber ancestry but happily declared my Scottish descent and continued to press for the prices I wanted.  After a few rounds, we got close enough and closed the deal.  Three blankets and two pillowcases.  Cha-ching. 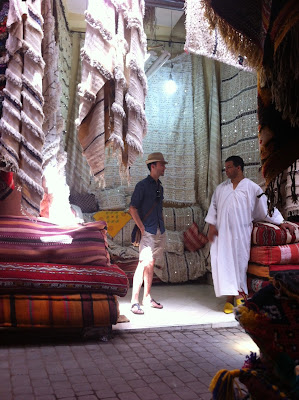 The third thing our blanket merchant asked me was whether Amanda was a good cook.  During the whole of this transaction, Amanda had sat patiently, observing and offering her opinion when solicited.  She wasn't in the market for a blanket, but our shopkeeper kept trying to engage her (so that she would buy something herself) or use her as a way to get me to buy more ("Okay, now which one are going to buy for her?").  The question about cooking seemed innocent enough, and I thought it would be thoughtful of me to acknowledge that, yes, she is a good cook.  SNAP!  The trap shut before I knew what had happened.  No sooner had my blankets been bundled and bagged, we found ourselves whisked off through the souq and into a hidden spice shop where the blanket-seller's cousin (dressed in a doctor-like white lab coat) and his assistant gave us a demonstration of his wares.

The demonstration took lecture form:  We sat obediently on a bench on one end of the room, while he pontificated from the cashstand/podium.  The lecture was punctuated from time to time by his assistant's swabbing our various body parts with scented oils or fragrant powders.  The big stuff was handled by our lecturer himself.  He passed the jar of eucalyptus crystals (which were enough to clear all your sinuses).  Then he wrapped some mystery spice in a black cloth, crushed it in his palm and -- surprise! -- shoved it up my left nostril and commanded, "Now breathe!"  Umm, okay . . . [sniff]  To my surprise, my sinuses were thoroughly scoured yet again as a mentholy dust rushed into my lungs.  Clearly, Moroccan remedies are very strong on head clearing.

Once we'd sat through the lecture and consumed the obligatory Berber tea (which was initially presented as being completely herbal, although I'm pretty sure he later said there was green tea in it -- when in Rome, right?), we escaped into the souq and resumed our shopping.  We headed down the path and came upon a carpet store.  It looked fancy and had some lovely specimens hanging out in front.  We decided to go in and look around, get some data points for comparison with a different carpet shop that we'd visited on our first day in town.

The shopkeeper sat us down for our second lecture of the day, this time all about Moroccan rugs.  It was actually useful to get a sense of the different styles -- the two primary styles are the "Sahara" style, which is characterized by undulating patterns evocative of sand dunes, and the "Atlas" style, which is much more geometric.  I also had a chance to compare different quality levels, seeing in detail the gradations in tightness of the weave and complexity of pattern.  Then he started throwing rugs on the floor -- the lecture was over; the sale had begun.

I hadn't planned to buy anything here -- as I said, the goal was just to compare.  But then he threw down a little rug that I really liked and thought would go well in my bathroom.  So I engaged the negotiation, was again called a Berber, and walked out a few minutes later with another package under my arm.  (Well, actually Amanda's arm -- she thoughtfully offered to carry this one.) 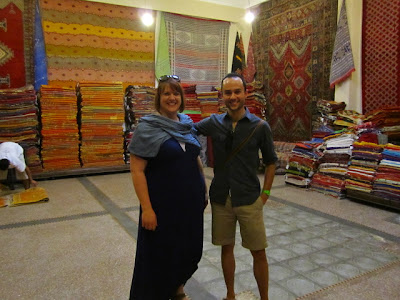 Next stop was the rug shop we'd visited on Day 1, a little hole in the wall manned by a gentlemanly mustachioed fellow and his young lackey, Abdullah.  Having dominated the last two rounds of purchasing, I let Amanda lead on this one.  While she worked her way through piles of large area rugs, I started checking out the runners piled on the other side of the shop.  I also kept an eye on Amanda's selection and would yank rugs out of her reject pile for my own consideration (it's convenient that she and I have very different decorating tastes -- surprisingly often what she rejects is exactly what I'm looking for). 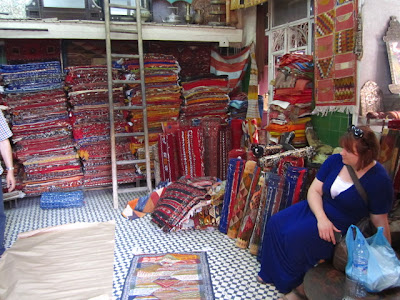 By the time Amanda was in the terminal stages of negotiations for her rugs, I'd made my own selection.  I jumped into the discussion and worked on cutting a deal that would get both of us the rugs we wanted, using Amanda's last offer as the starting point.  The word "Berber" surfaced again, and again we struck a deal that seemed fair to both parties.

Part of the deal involved an on-the-spot customization of the runner I'd just bought.  I plan to put it in my entry hall, but the runner in its original form was just to long.  I used that as a source of angst and leverage in the negotiation until the shopkeeper offered to cut it down to size.  Custom rug!  You bet.  So once we'd shaken on the deal, Abdullah set about cutting the rug, teasing out the yarn, and creating the characteristic fringe.

Abdullah also expertly sewed all of our rugs into tight little packages, wrapped in tarpauline material, ready for international shipment. 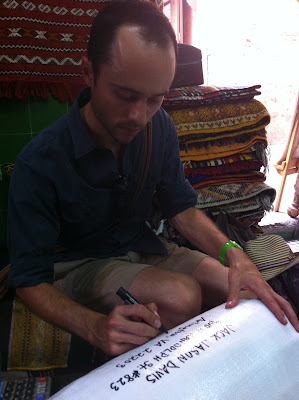 Unfortunately, the entire process took longer than expected.  By the time we were done the Maroccan post office was closed and we knew we'd be cutting it close for both FedEx and DHL.  We optimistically decided not to worry about this -- we'll just take our packages back to the riad with us and mail them when we get to Fez in a few days.  So now our room looks like Christmas just hit.

This whole story made me laugh! I'm so glad Amanda has you pegged! But amazing purchases... I cannot wait to see those wedding blankets! Those sound fascinating and amazing!