Fez, Day 1: Dinner amidst the din

You know that saying, "If you don't have anything nice to say, don't say anything at all"?  That's how I feel right now.  We've been in Fez for only a few hours and I really miss Marrakesh and the desert.  Fez feels much bigger than Marrakesh -- the buildings are taller and made of a cold white stone (instead of the warm ochre of Marrakesh), there is more four-wheeled vehicular traffic (as opposed to donkeys and motorbikes), and there is a lot more noise (for some reason everyone seems to be hollering all the time, sometimes for no apparent reason at all!).  It's chaotic and overwhelming.

Also, there are no women on the street.  We went out to look for a restaurant and there were only crowds of men and boys.  Everywhere only men and boys staring at us wherever we went.  We drew enough attention together; imagine how it would have been if Amanda had been alone!  Not that it was a hostile or menacing attention -- it just wasn't particularly friendly.  There's a cultural norm, common to the US and much of Europe, that staring at people is generally not okay.  You might want to stare, but you do it carefully, in a way that isn't too obvious or instrusive on the person of interest.  That norm apparently does not apply here:  As we walked through the crowded streets, the men stared openly at us in a way that wouldn't be acceptable at home and was not comfortable here.  I think the intent was not to make us uncomfortable; even so, that was the effect.

We found Thani, a little restaurant that had been recommended by our riad, without too much trouble.  We ordered a tagine and sat on the terrasse watching the street traffic go by. 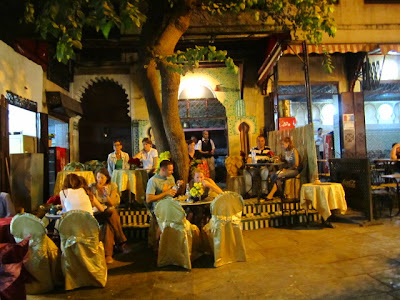 We gave each other moral support and encouragement to withhold judgment on Fez until we'd had a chance to eat and get some sleep.  After all, the city is widely regarded as one of the highlights of Morocco and had been highly recommended by good friends whose judgment I trusted.  It's entirely possible that, had we started our travels here, we would have loved Fez and disliked Marrakesh on first view.

Another thing to keep in mind is that today was the first day of Ramadan, the holy month in the Islamic year when the faithful fast all day for a month.  The strange energy in the city could be due to the fact that everyone was starving and thirsty!  In fact, as we ate, we heard a cannon fire, signaling the end of the fasting period for the day.  There were loud cheers from the crowd -- and then everyone disappeared!  All those men and boys gone in an instant, presumably back home to eat and drink until tomorrow morning when the fasting begins again.  The change of tone was dramatic and remarkable.  Already I liked this place better.


And on that somewhat positive note, I will sign of and hope that tomorrow will help us uncover the charms of this strange new city.
Posted by JJD at 11:00 PM