By the second century BC, the Roman empire extended through a network of fishing cities in northern Africa.  During the last century BC, they established themselves in Volubilis, not far from current-day Fez.  The city remained under Roman control until the Berbers drove them out in the 300s AD.  The Arabs took over in the 8th century AD and remained until the place was leveled in the 1755 Lisbon earthquake.  Today, it's a city in ruins set among fields and olive orchards.  We hired a driver to take us out to visit it.  We've seen Roman ruins before, and in general these ruins didn't stand out as particularly remarkable.  But the mosaics were incredible -- some of the best I've seen.  Plus, everything was Roman and therefore familiar; it felt kind of like coming home and seeing all your old friends. 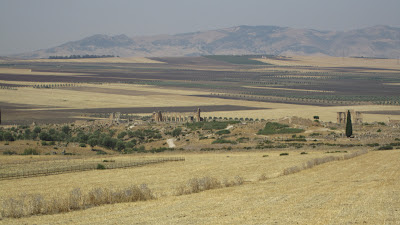 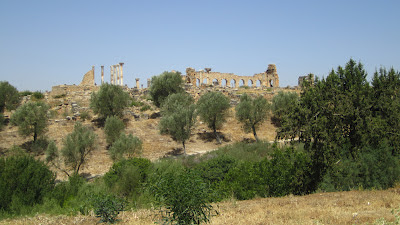 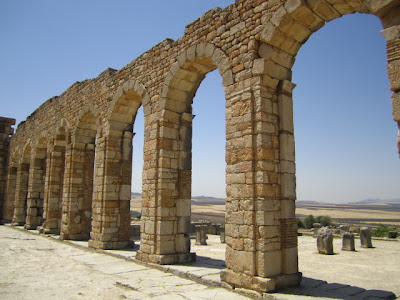 Roman houses were generally rectangular, laid out around  a central courtyard.  Many of these houses were still largely intact (at least, as far as their floorplan went).  It was neat to get a sense of what a house was like and to see the varieties of courtyards:

As I mentioned, many remarkable floor mosaics remained in their original location, largely untouched by time.  Each piece is a colored stone (as opposed to tile), so they don't need any further protection from the elements. 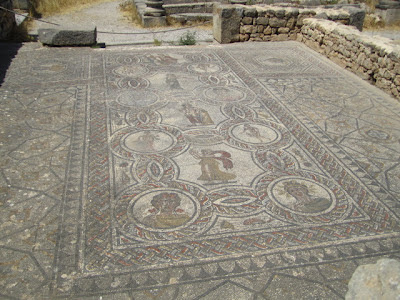 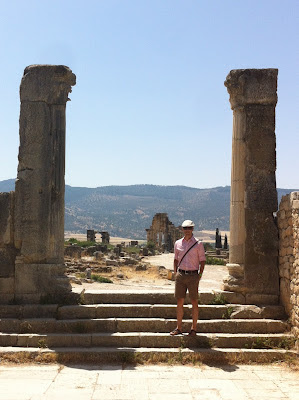 Have you ever wondered about the origin of the "carat" as a unit of weight measurement?  Me neither.  But I learned the answer today:  Our guide explained that carob beans are consistently identical in weight with every other carob bean on the planet.  So the Romans would use those beans when measuring out gold, etc.  From "carob" came the word "carat."  Cool.
﻿ ﻿