Marrakesh, Day 2: What we ate

Amanda and I take great pride in the food we eat and our ability to find delicious food (whether high-end or low) wherever we go.  Not every day is a hit, though.  For example, today was a disappointingly weak day as from a gastronomical perspective.

We started off with breakfast at the riad.  A simple affair with bread, yogurt, a hard-boiled egg and some orange juice.  The juice was fresh-squeezed and delicious; the rest of it perfectly serviceable.

For lunch we had hoped to try a highly recommended restaurant in the new city.  After trekking through the heat and traffic to get there, though, we discovered that today was the last day of the annual "period de fermeture".  We could come back tomorrow, but no service today.

So we went to the cafe next door.  We had the option of sitting in 115 F heat outside on the terrace, or inside with air conditioning and clouds of cigarette smoke.  We chose the latter, hoping that we'd be able to grab a quick bite and be on our way before catching lung cancer.  No such luck.  Our water was on the dimmer end of the spectrum, and his French was pretty bad.  For example, we each ordered a soda and a bottle of water.  He brought Amanda a different kind of soda and no water; he brought me water but no soda.  We reiterated the order and he came back with a bottle of water (different size from mine) for Amanda and still no Coke for me.  I re-reiterated my order and he disappeared for fifteen minutes before coming back and grabbing a Coke out of the fridge that was only a few feet from our table and bringing it to me.  That was just the first of several long disappearances -- it took forever to get the check and pay.

Needless to say, by the time we left that cafe we had caught lung cancer and black lung disease.

After a long (so long!) afternoon nap and a relaxing blogging session, we were ready for dinner.  We decided it was time for some traditional Moroccan food, so we asked the guy at the riad where we could get some cous-cous and tagines.  He was standing outside talking with a friend when we asked, and this friend immediately offered to guide us to a place nearby.  Uncertain what to expect -- but hoping that it might turn out great, as our experience with enthusiastic impromptu guides did in Turkey and Peru -- we followed him.

Our guide whisked us through the alleys, across busy streets, and up a flight of intricately tiled stairs -- where we found ourselves in an ornate hallway full of incense, dancing women and clapping men.  Holy cow.  Instantly we were drawn through the sequined gauntlet and into an over-the-top dining room that screamed tourist trap.  They plopped us down at a table in the corner, and there we were.  Awkwardly staring at an outrageously expensive menu and feeling we'd just been hijacked. 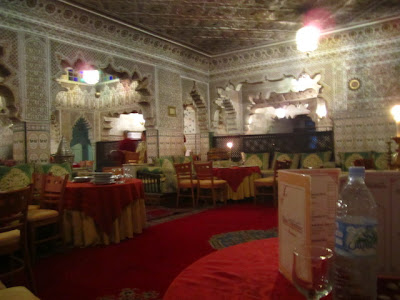 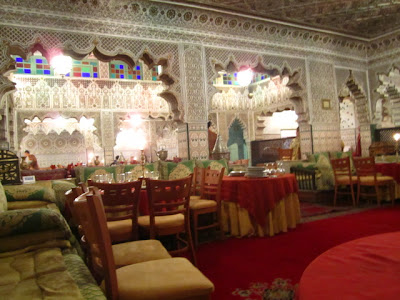 We contemplated leaving to find something more down to earth and reasonably priced.  Then the waiter, sensing our unease, brought a second menu with a more limited selection and (only moderately) better prices.  That, plus inertia and an American inclination to avoid conflict, was enough to get us to stay.
﻿ ﻿﻿ ﻿ ﻿﻿

The food was fine but not outstanding -- certainly not worth the price we paid.  What we got instead of great food was non-stop live, traditional music that was so loud we had to shout at each other to maintain dinner conversation.  And then singers, and belly dancers, and women who twirled around with plates on their head.

Was it horrible?  No (it was, I'll admit, better than the cous-cous we had in Paris last year).  But it wasn't great, and it certainly wasn't how we'd hoped to spend the night.  Next time we'll be a little more careful about running off into the night with strange men who promise tasty food.
Posted by JJD at 7:26 PM