Breakfast at the Riad.  All the little pots of jam and olives were a welcome expansion on the standard fare we've had for the past week. 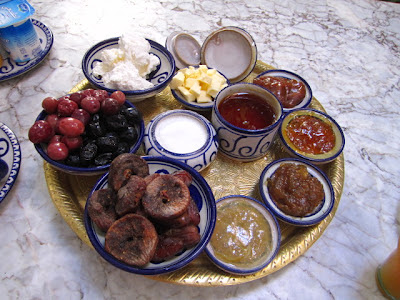 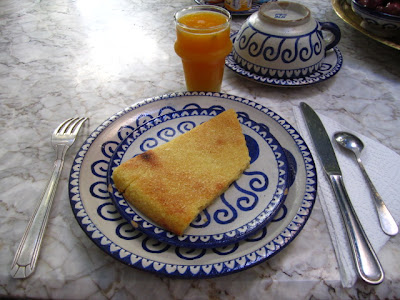 Lunch at Cafe Clock.  We picked this British-owned place because it was recommended in all of our guides, and because we wanted a break from traditional Moroccan fare.  Finding it was a trick, since the entrance is down a long, narrow crevice in the walls of the souq.  But the lamb burger with mint was tasty and very satisfying. 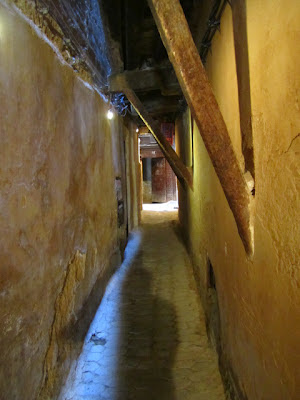 ﻿ ﻿
Dinner at La Kasbah.  Although recommended by our riad and the guidebooks, this restaurant is the weakest we've seen since that awful "authentic Moroccan" place we went to in Marrakesh.  The food was mediocre and the presentation subpar.  In fact, I'm pretty sure they didn't even cook my "tagine" in a tagine -- whereas every other tagine I've ordered comes boiling in the dish, the meat and vegetables in this one had quite obviously been spooned onto a cold tagine dish just moments before being served.  On the other hand, it was nice to sit on the roof-top terrace with views over the place below.