Over land and sea -- back to Spain! 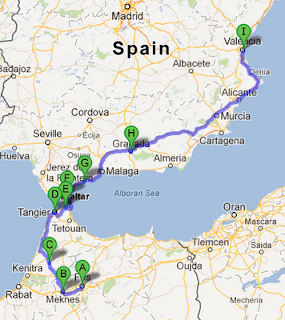 Right now I'm sitting in a hotel room in Valencia, Spain -- which is a long way from Fez, Morocco, where I last posted.  In the past two days we covered an enormous amount of terrain -- going from Fez to Granada yesterday, and then from Granada to Valencia today.  The trip covered (parts of) two continents, required three forms of transportation (train, car and boat) and took approximately 24 hours of actual travel time.  Most of it went exactly as planned; some of it went exactly the opposite of what we'd planned.  A fitting way to celebrate Pioneer Day, I think.  Here's a quick breakdown of the different stages. 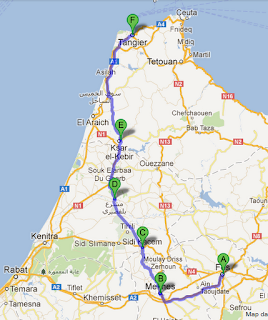 Tuesday, 7/24, 7h10-12h40 -- Fez to Tangier.  At 7am on Tuesday we sleepily climbed on the first train to Tangier.  We had purchased first class tickets in the hopes of avoiding crowds, heat and smells; naturally we found our compartment occupied by a sleeping woman and her child.  Thinking that she was perhaps also assigned to the compartment, we gingerly tried to settle in around her, trying not to resent how her limbs sprawled over three seats and her shoes cluttered the floor.  Then the attendant came by, saw the situation, and escorted her somewhat unceremoniously from the compartment.  We felt bad for the woman but grateful for a comfortable place to sit.  From there on the ride went smoothly.  The first class car was roughly comparable to ordinary cars in places like France or the U.S.  We had to change trains at one point; a process that consisted of our first train stopping in the middle of nowhere, all the passengers getting out and waiting in the shade of the first train, and then climbing aboard a second train when it showed up twenty minutes later.  A second, unexpected delay came when we stopped (again in the middle of nowhere) to allow a train coming from the opposite direction to pass.  At least this time we were near a rural marketplace, so we could see the horses, women's hats and other activity of interest. 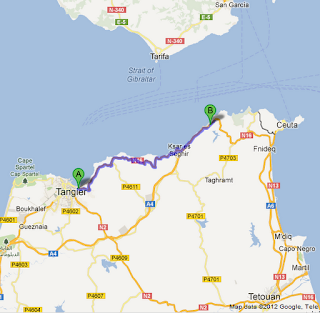 Tuesday, 7/24, 12h40-13h40 -- Tangier to Tangier Med.  This was the tricky part of the trip.  We needed to get to Algeciras, Spain, before the car rental shop closed at 6:30pm, but we did not know ahead of time how that was going to work.  We had a general idea of two options:  (1) Take a quick ferry from Tangier to Tarifa, then find a way (cab?) to get ourselves from Tarifa to Algeciras; or (2) get ourselves from Tangier to a commercial port called Tangier Med and take a slower ferry directly to Algeciras.  Each trip had its advantages and disadvantages, as well as its own set of unknowns and risks, but on paper both of them worked.  We decided to go with Option 2 -- and, well, it turned out okay.  As soon as we got off the train in Tangier we found a cabbie who looked like a pirate and was willing to drive us to Tangier Med, which turned out to be about an hour away.  Fortunately, our cabbie needed no prompting to get us there quickly -- he had quite the lead foot on that coastal road.

Tuesday, 7/24, 13h40-18h30 -- Ferry from Tangier Med to Algeciras.  Once in Tangier Med, we bought a ticket for the 2pm ferry thinking that we'd be able to scramble on before it left.  Alas, due to several annoying delays (a pesky tout trying to "help" with our luggage, an overly chatty security guard who wanted to look at my ceramics, a shuttle driver who was napping when we got on the shuttle) they pulled the gangway right as we got to the quay.  Honestly, if they would have waited thirty seconds we would have made the boat.  But we didn't.  So it was back to the ferry terminal, back through passport control and security, back to the ticket counter so that I could change the tickets for the next ferry.  This involved my taking a piece of paper from office 1 to office 2, which then gave me a different piece of paper that I then took back to office 1, where I paid and got another set of papers to take back to office 2, who finally printed the new tickets.  Then back through security and passport control, back to the sleepy bus driver, and back down the ramp to a different ferry.  Which left an hour later.  The ferry ride itself was uneventful and perfectly pleasant -- I love boats.  I also loved the point at which, in the middle of the Straits of Gibraltar, I could see both Europe and Africa at once. 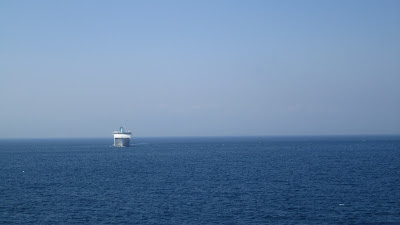 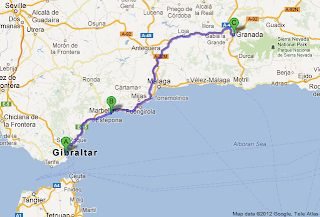 Tuesday, 7/24, 18h30 - Wednesday, 7/25, 01h00 -- Algeciras to Granada.  As our ferry slowly docked in the Algeciras port, we were beside ourselves with anxiety about our car rental.  In order for the rest of this trip to work, we needed to get to Granada that night -- and in order to do that, we needed to have a car.  And the rental place closed at 7pm.  Here we were, just barely docking at 6:30; we still needed to get off the boat, go through passport control and customs and figure out how to get to the rental office.  So I called the office to let them know we were coming and could they please wait for us.  The guy's response:  "You have no reservation."  What!?!!  We had reserved this car over a month ago and had received several confirmation emails, including one only a couple of days ago!!  Nope, nothing in the system.  "And in any case, I don't have any cars."  Click.  Well, there went all of our best laid plans down the drain -- we were in a seedy port town without a car or hotel, and it was already after 7pm.  [Despairing sigh]  We ran to a WiFi hotspot in the ferry terminal and started doing some frantic homework -- Amanda was running through Algeciras hotel listings (it's a seedy port town, not known for its accommodations) and I started calling every rental office I could find in the city.  No luck.  Then I spotted some cars with rental company logos on the sides parked outside, so I went out to see if I could find the drivers and have them direct me to the office.  Turns out something better happened:  Once I was in the parking lot, I saw a shop front around the corner -- it was a rental company, and it was OPEN!  From then on, everything was right with the world.  The rental process couldn't have been easier; the clerk was super helpful and friendly.  Within half an hour we were rolling out of Algeciras in a little gray Citroen.  An hour later we were starving (we hadn't eaten anything of substance since breakfast at 6am), so we pulled over at a random resort town hoping to find something decent.  The first thing we saw was a Hard Rock Cafe.  Not exactly our typical fare, but we were too hungry and tired to care -- we devoured giant hamburgers with French fries and ketchup, and they were delicious!  Then it was back into the car for another 3.5 hours to Granada.  We arrived around 1am at our little hotel (a converted 15th century mansion) and went right to bed.  We were exhausted but happy to have arrived safely! 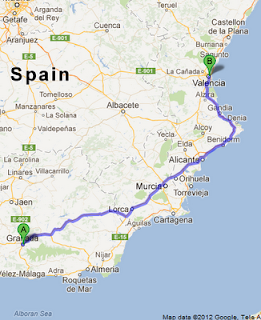 Wednesday, 7/25 -- Granada to Valencia.  After a too-short night in our comfortable hotel, we spent the morning and early afternoon visiting the Alhambra (which will get its own post) and then left for Valencia.  The trip took us about 6 hours, total, and thankfully was completely uneventful.  We arrived at the Hotel Ad Hoc around 8:30pm, convinced them to give us a room with two beds, and then went out searching for dinner.  The Michelin guide told us there was a one-star restaurant down the block from the hotel; alas, we found the location but the restaurant had changed hands -- the ambience and presentation was fantastic, but the food wasn't outstanding.  We'll stay in Valencia through lunch tomorrow so that we can visit some of the famous architecture and try a different Michelin restaurant for lunch (fingers crossed the guide is more reliable a second time around).  Then we'll be off to Barcelona for the last leg of the trip!