Okay, so anyone who's been following me for a while will recall Amanda's and my first foray into public bathing.  It was enormously fun, and we've been on the lookout for opportunities to get naked in public again ever since.

Well, I say "again" but I'm pretty sure Amanda would dispute that word as applied to me.  Instead, she would use words like "cheated" and "betrayed" while pointing out that, unlike her brave self, I kept my trunks on beneath the tiny modesty towel that was ripped so unceremoniously away by our bathers.  And she would have a point.

So you can imagine my delight when I discovered that Koreans have a rich tradition of public baths.  Not only could I have all my dead skin cells scrubbed off by a brillow-pad-wielding stranger, I could also redeem myself by actually getting naked this time.

We reserved our last day in Seoul for the Korean baths.  Rising at the ungodly hour of 8:00 am, we dressed quickly (no need to shower before a bath!) and ran down the block for one last breakfast of pastries at Paris Baguette.


Having thus ingested an organic milk bread and a cream cheese pie (the waffle went into the bag for later consumption) and a freshly blended cup of tomato juice, we made our way to the Yongsan Dragon Hill Spa on the other side of town.  We emerged from the subway into an enormous modern shopping center . . . 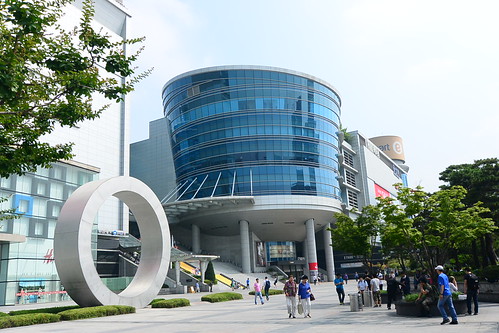 . . . but our destination was next door, in a gaudy building so laden with kitsch that I thought for a minute I'd traveled to Las Vegas. 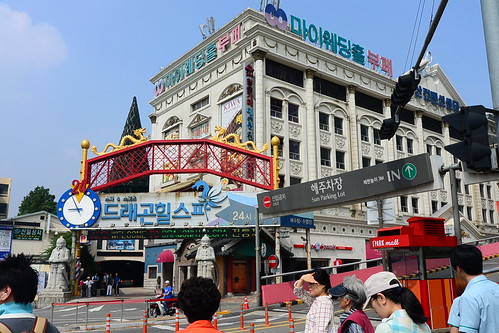 We walked past the giant "stone" samurai sentinels, beneath the unseasonal Christmas tree, and down a path lined with mostly dead bamboo. 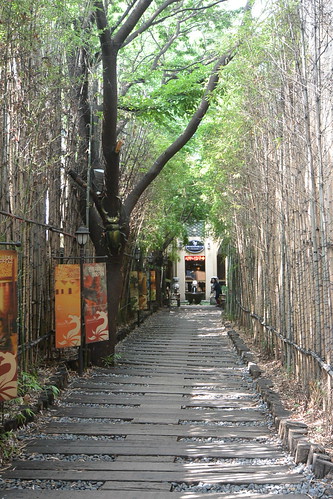 At the end we were greeted by a tiny woman at a reception desk who handed us a map of the place (there were at least seven different levels, all with different illustrated attractions and amenities and lists of gender-specific rules) and then ushered us to a check-in gate.  There the clerk handed each of us a stack of clothing (nondescript t-shirt and shorts) and a numbered bracelet with a key.  We used the keys to deposit our shoes into nearby shoe lockers, and then it was time to split up -- Amanda to the women's baths, and I to the men's.  We really had no idea what to expect, so we just wished each other good luck and agreed to meet back there sometime before noon. 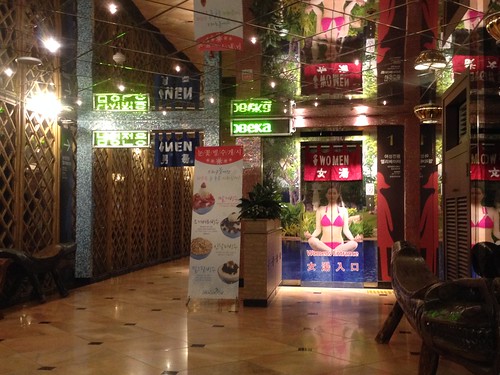 I took the men's elevator to the fifth floor, where I emerged into a bright, institutionally clean room.  To the left was a large room lined with mirrors; to the right were banks of lockers.  Directly in front of me was a sort of concession stand, where a variety of chilled beverages were displayed alongside a puzzling number of crates filled with eggs (why on earth would you need a raw egg, let alone several hundred of them, in a men's locker room?) and stacks of folded towels.  Past that, on the far side of the room, was a miniature barbershop.  And everywhere there were men.  Naked men at the mirrors engaged in various grooming activities; other men near the lockers climbing into or out of their clothes; old men standing by the counter watching TV; young men sleeping on the wooden benches that lined the passage between the mirrored section and the locker-room section.

It was a lot to take in.  So I started with the easy part and found my locker and started to undress. 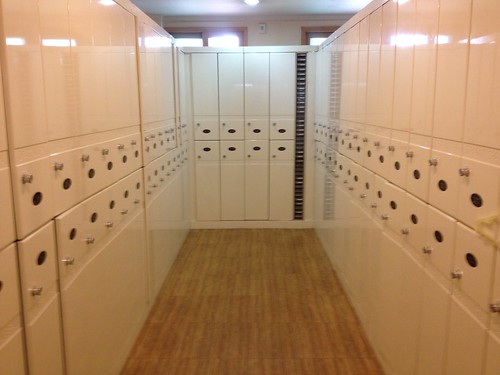 But then I realized that I had no idea what I was supposed to do or where I was supposed to go once I was undressed.  So I put my clothes back on and went out to get a lay of the land.  The locker room was straightforward enough, and I figured I could just ignore the barber shop and the eggs.  I saw that the grooming area was where you went after you had bathed, to dry off and apply whatever lotions or hair products you desired (there were hair dryers, hair gel, and strongly scented aftershaves and lotions).  As for the baths themselves, I surmised that they must be on the other side of a pair of steamy glass doors in the back corner of the mirrored room.  That's where I needed to go!  Back to the locker and off with my clothes . . . .

Okay, now don't freak out!  I'm not actually naked in this photo -- I've got one of those tiny modesty towels clutched 'round my loins.  And since I used one of those fancy Instagram filters, it's technically "Art" and not one of those creepy shirtless selfies that people use on dating websites.  This blog is still totally safe for work.

Anyway, now properly starkers (sans modestly towel), I walked back through the mirrors and through the steamy glass doors.  Again bewilderment!  To my left were a bank of normal showers; next to them were a couple rows of low counters with stools and nozzles shower hoses.  Past those were a series of pools of various temperatures, and some doors that led to further unknown regions.  Where do I start?  What's the proper order of things?

I decided to start with a shower.  I knew from the guidebook that etiquette required rinsing before soaking in the pools.  Plus, I thought a quick shower would give me time to watch what other guys were doing.  Turns out they weren't really doing anything other than washing or shaving or sitting in a pool.  It was as if this was just ordinary life for them -- no big deal!

So I charted my own course:  I started with the hottest pool (110 F), then worked my way down to the others (107 F and 104 F respectively), before jumping into the cold pool (68 F).  Then into the steam room (130 F).  Once I stopped worrying about what I was supposed to do, and just did what I wanted to do, I started to feel totally relaxed.  It was fun!

Lest you think this was all posh and zen like one of those spa commercials, picture this:  I'm sitting on a bench of green glass tile, sweating my brains out with a couple of ancient Korean men (one of whom is jogging in place in the corner), when in walks a repairman in full workman's gear carrying an electric drill.  He then proceeds to dismantle and reassemble the wood latticework separating the heating apparatus from the rest of the room.  I'm all, like, seriously? You have to do this now? Shouldn't you at least take your clothes off like the rest of us?

Anyway, after the steam room it was back to the pools for another round of soaking before heading to the body scrub room.  This was actually my third attempt to get in for a scrub.  The first time I'd looked in I'd found the attendant asleep on one of the benches.  The next time he was in the middle of scrubbing another guy.  This last time, the attendant was both awake and not otherwise occupied, so he motioned for me to come in and lie down -- "face up!"

He plopped a hot towel on my face, poked my eyeballs kind of gently and then thumped my forehead loudly two times with his fist.  Then he dumped some hot water on me and strapped on a rough exfoliating mitt, which he then proceeded to scrub across my entire body -- front, back and sides -- into every nook and cranny, even that little divet between your ankle and your achilles tendon.  While doing this he alternated between expressing astonishment at the amount of dead skin he was peeling off (apparently I was long overdue for a full-body exfoliation!) and peppering me with friendly questions:

Uncertain where this would lead (was he offering a Korean woman?), I changed the subject.

Eventually scrubbing gave way to a massage (which involved a fair amount of thumping and slapping), followed by a good full-body soaping and a shampoo, and one last rinse.  He clapped me on the shoulder and handed me a towel:  "Now you take a shower!"  So I did.

After I had showered and dried off, sampled all the aftershaves and lotions I could find, donned my standard-issue t-shirt and shorts, and headed downstairs to find Amanda.  She was waiting near the elevators with a look of boredom and irritation on her face:  Apparently the women's baths are closed on Wednesday mornings, so while she'd been allowed to change into her spa-issued outfit, she hadn't been able to shower, soak or get a body scrub.

To cheer her up, we started exploring the non-gender-segregated common areas.  There was a depressing little cafe area that seemed to sell only junk food . . . 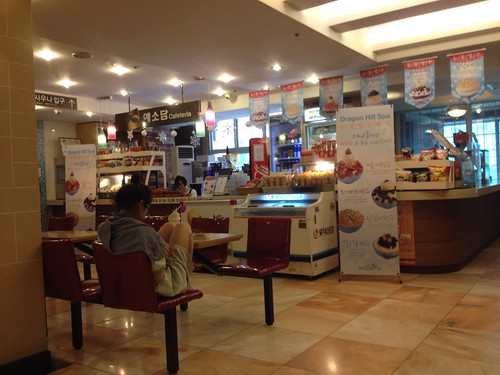 . . . and a series of kilns, where we could sit and bake in dry heat. The first one we tried was insanely hot and completely intolerable, as in, to the point of being a little terrifying. We escaped as quickly as we could and tried the others, which turned out to be more reasonable. 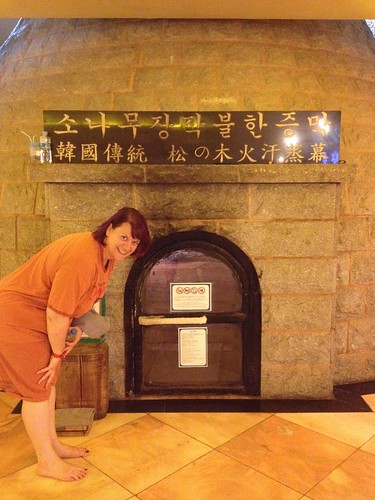 As we emerged from the heat, feeling all happy and relaxed, Amanda got a glint in her eye and urged me to try out the ice room.  Apparently she'd discovered it while she was waiting for me.  "It's glorious," she said, "just glorious!" 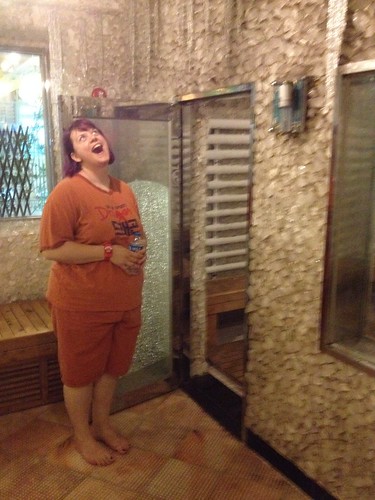 I went in and promptly FROZE TO DEATH next to the scary snowperson. It was NOT pretty. 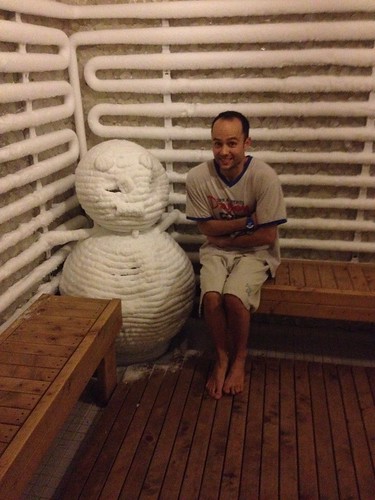 After the arctic blast, we took refuge beneath a couple of pyramids, heated, that featured aromatic herbs and lots of sleeping Koreans. We weren't interested in napping, ourselves, so we climbed back out after a few minutes and learned that the women's section had reopened. So Amanda went to find her bliss and I went out to look at the pool. 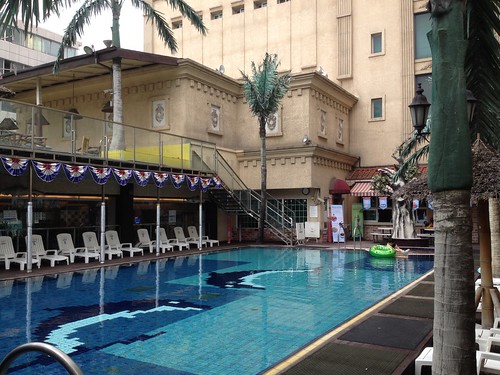 It wasn't all that cool, so I went back upstairs for another round through the pools and steam room before dressing and heading back downstairs to wait for Amanda.  She emerged about an hour later glowing and singing the praises of her scrubbing/spa experience with the little old Korean ladies upstairs.  Both of us now feeling deeply relaxed and extremely clean, we paid for our sessions (everything was tracked on a computer chip in our key bracelet) and walked out into the rushing world of Seoul.

Of course it's art. You're "clothed in nudity."