Staving off jet lag on the first night in Seoul

As we emerged stiffly out of the plane in Seoul, we were welcomed by the tepid humidity I remembered so well from last year's layovers on the way to and from Vietnam.  I remain baffled why such a beautiful and otherwise fully modern airport would not have air conditioning!

The building itself still was just as impressive as had been last year . . . 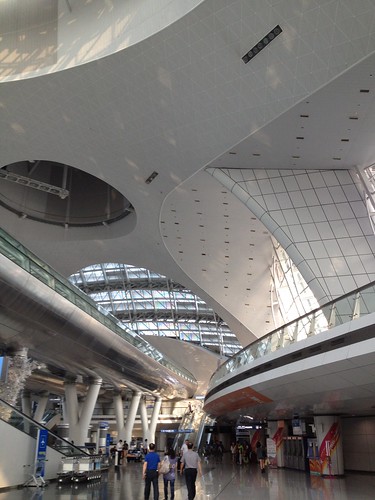 and my feet were just as swollen -- presumably from all that sitting and altitude.


We made our way smoothly through immigration, customs and the baggage claim.  And by "smoothly" I mean "eerily smoothly."  Everything was so clean and orderly and well run that Amanda and I -- accustomed as we are to the US flying experience -- kept looking at each other like, wait a minute, isn't air travel supposed to be one long frustrating pain in the neck?

Cindy, a friend of Amanda's, met us in the public area outside of customs.  She generously and oh-so-patiently offered to shepherd our groggy, jet-lagged selves into the city.  On the way she pointed out that we were two days into the official monsoon season just in time for said monsoon to dump sheets of rain upon us.

Cindy also gave us a crash course in Korean cuisine.  First thing we did in the airport was stop for a snack in a Korean cafe.


Then, after we'd gotten to the hotel and dried off from the cloud burst, she took us to a Korean barbecue restaurant for dinner.  We let her handle all the ordering.


I'm happy to report that, so far, the food has been better than expected.  I've never really liked Korean food; I've tried it several times in the US and always come away thinking that the kimchee and other fermented and/or pickled items were unappealing if not downright repulsive.  Although I can't say that all of it was my favorite, it has been a nice surprise to discover that some of it's pretty good!