We flew into Tokyo late last night.  It was dark, but from the cab I saw forests of skyscrapers, spotless highways and chic business and shopping districts.  It seemed sparkly and full of intelligent life, and I couldn't wait to start exploring.

Somewhat unusually, however, we didn't have any concrete plans for our first day in Tokyo; at least, not until the evening, when we would meet up with a small group for an in-home Japanese cooking class.  Tokyo is a big and complicated city, and we knew that we needed to finish laying some of the logistical groundwork for the days ahead.  So we started with a planning session over breakfast.

With our guidebooks and the hotel's Internet, we identified sightseeing priorities for Tokyo:  the Meiji shrine, the Harajuku neighborhood and Takeshita Dori, the Shibuya train station and its famously insane intersections.  But we had a less easy time once we started working on projects that needed more logistical and/or linguistic sophistication, such as making reservations at Michelin-starred restaurants and figuring out the train schedules for a day trip to one of the famous onsens (public baths).  After banging our heads against the wall for a few minutes, we decided to see if the hotel's concierge could offer any suggestions.

The concierge was a petit, middle aged woman with a very clear, almost British accent.  As we sat down in front of her, she pulled out a notebook and warned/apologized that "unlike other concierges," she was "very organized" and "liked to take notes."  To which Amanda and I basically responded, "honey, if only you knew who you were dealing with, you would know that you've basically just said all the magic words."

When we asked her about the onsen we intended to visit, she all but gagged in horror and said we should only go there if we enjoyed long, inconvenient travel and bathing in a foul-smelling facilities where we would almost certainly catch chlamydia and die. (Okay, she didn't actually say that last part, but the implication was there.)  Then, hearing our quick assurances that we did not enjoy such things, she proceeded to recommend an onsen in a totally different town, writing down detailed directions on when to go and how to get there.

Excited by our new best friend's knowledge, we said we were also interested in making reservations at Michelin-starred restaurants.  "Would it be better," we asked, "to reserve online or have someone place a call for us?"  Beaming, she said, "Leave it to me.  You have no idea how powerful I am."  She then reached into her drawer and pulled out another notebook in which were listed many different restaurants and phone numbers and price ranges.  She placed a few calls, spoke to the owners, and informed us that, not only did we now have reservations, but that the owners also would make a special allowance for me to eat at the establishment without proper attire (this is what I get for not traveling with a jacket!!).

But that wasn't the end of Ms. Concierge's helpfulness.  Before sending us on our way, she helpfully marked up a map for the various sights we were planning to see today.  She drew arrows for where we would walk, little dots for places we could eat.  By the time she handed us the map and bid us farewell, we felt like nothing could go wrong.

MEIJI SHRINE
We started with a visit to the Meiji-jingu, a Shinto shrine dedicated to the Emperor Meiji and Empress Shoken.  It was built in 1920, destroyed in WWII, and rebuilt in the late 1960s in the original style.  It's one of the top-rated sights in Tokyo, and I can see why.  The architecture seems very pure and authentic, and the surrounding parks and gardens are lovely.  We spent quite a while taking it all in.

The pathway leading to the shrine passes beneath at 12-meter gate that was made from a 1500-year-old Taiwanese cypress tree.  It's the largest such gate in all of Japan. 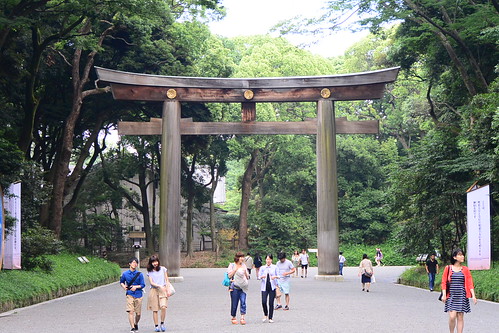 Just outside the main entrance is this fountain, where pilgrims are invited to prepare themselves for prayer in the shrine.  The ritual consists of using the ladle to wash one's hands and mouth. 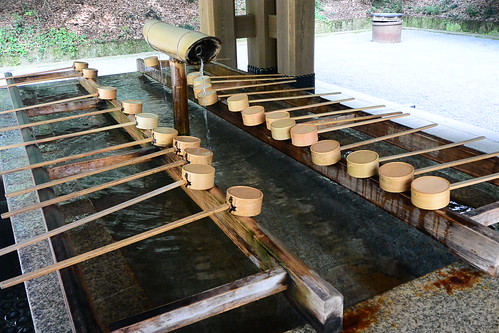 The main gate itself is a massive structure through which you pass into a tranquil courtyard. 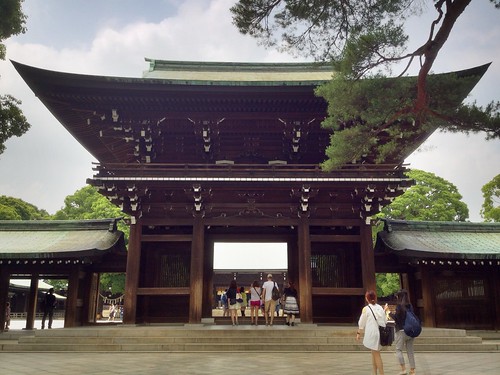 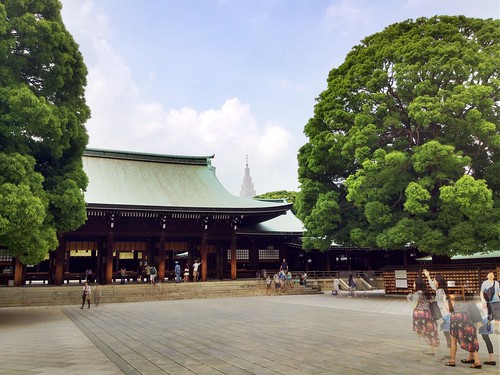 The shrine is believed to be the resting place of deities.  The faithful come to pray; the tourists are permitted to observe but not to take photographs. 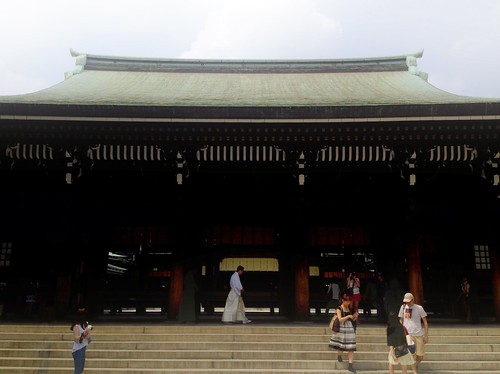 More interesting than the forbidden interior of the shrine, to me at any rate, were the beautiful architectural details on the buildings.  The roofs, in particular, were striking. 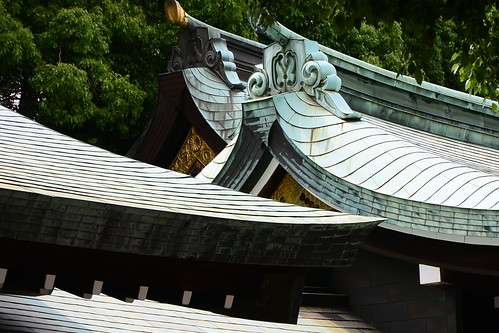 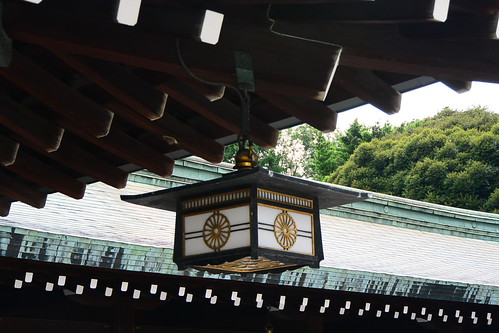 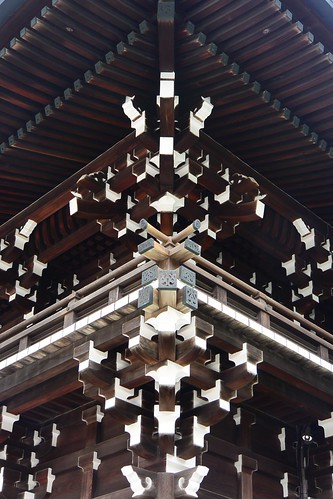 Visitors were invited to write their prayers on small wooden tablets and hang them from
a fence-like structure encircling one of the trees in the shrine's courtyard. 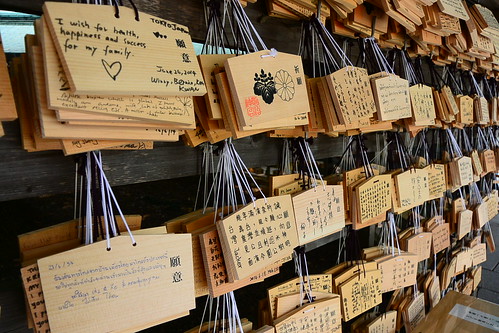 THE INNER GARDEN
When the Emperor built the shrine, he also planted extensive gardens, including a famous iris garden to please his wife.  We timed it just right and got to see the garden during its peak blooming season. 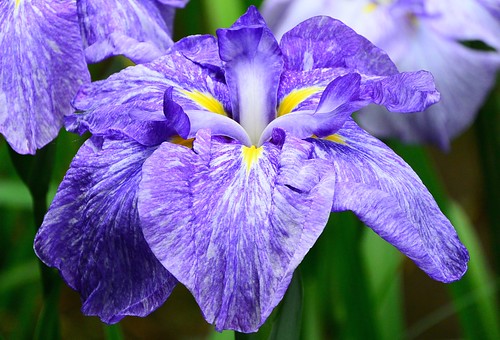 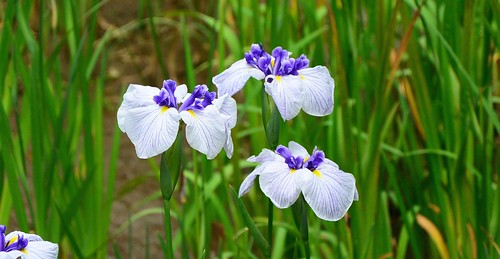 TAKESHITA DORI
Emerging from the tranquility and natural beauty of the shrine compound, we found ourselves back amidst the concrete, hubbub and bustle of city life.  We decided to embrace that hubbub and seek out the famous Takeshita Dori, the so-called heart of teen culture in Tokyo.  The narrow pedestrian street is packed with cutesy shops, trendy clothing stores, and, well, teenagers. 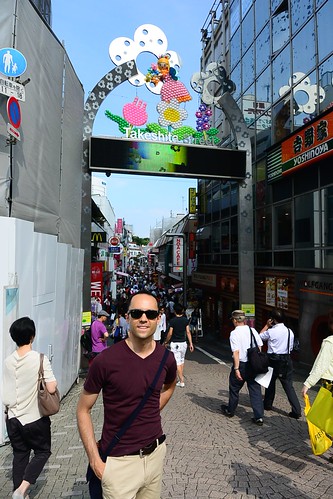 As we walked through the chaos, I sensed that Amanda was fading fast.  Although her pioneer heritage forced her to say that everything was "fine" and keep trudging along, I could tell she wasn't having fun -- she needed food and drink.  Of course, in teenager land -- where apparently everyone eats only over-the-top sweet crepes -- it took us a while to find a place that also sold normal grown-up food.

Of course, the reward for eating one's healthy grown-up food is getting to splurge on one of those ridiculous crepes.


SHIBUYA
Leaving the Takeshita-dori, we jumped on the train and rode one stop to the Shibuya station. 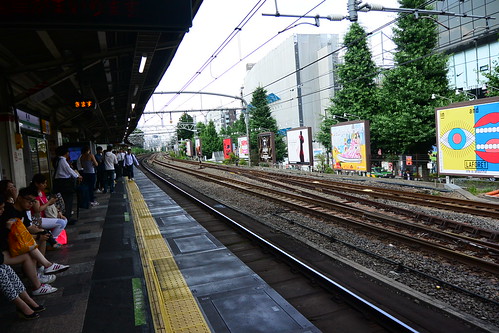 This station is one of the major hubs in Tokyo, with lines coming in from all directions.  The world outside the station is even wilder:  it's surrounded by towering office buildings and a teaming shopping district. 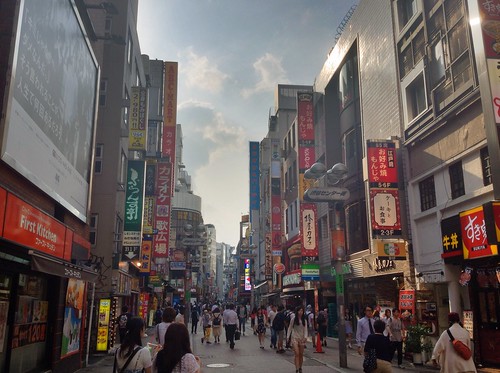 One particular draw is the so-called Shibuya "crossing", a major intersection where the traffic lights stop all streets at once, and the pedestrians essentially have a 60-second heyday to run wherever they want. 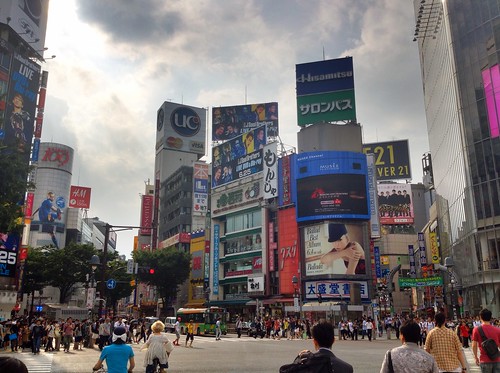 We crossed in the midst of the chaos, but while I managed to get a shot of the bride, it was hard to get a sense of the crowd.

Fortunately for us, there was a Starbucks conveniently overlooking the square.  We made our obligatory purchase and went upstairs for a view of the action.

Love this post. I think I would have to spend a while at this intersection just so I could cross in every direction possible,just cuz I can. Lady