Tokyo is a glittering, modern city and I love it in all ways, but it's a little short on history and tradition.  If you want that, you need to go to Kyoto, which was the seat of imperial power for centuries and escaped the worst of the bombing during WWII.  The city has a higher concentration of temples, shrines, and other traditional Japanese architecture than anywhere else in Japan.  We were excited to see it!

But we weren't in any rush to get there.  After a week of high-intensity traveling in Korea and Tokyo, we were tired (that should be pronounced with two syllables for emphasis; think "tie-yerd").  So on Saturday evening we purchased tickets for the 11am train on Sunday and enjoyed a late, leisurely morning before arriving on the platform in Tokyo station.


Our train soon arrived, we found our seats, and settled down for a comfortable, high-speed ride to Kyoto. 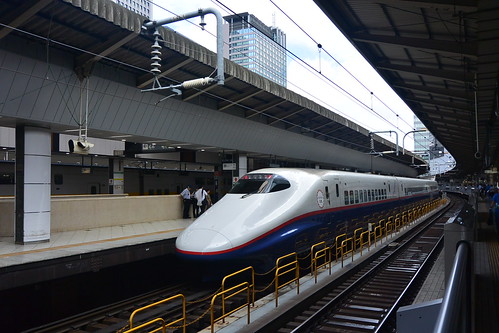 About 45 minutes into the ride, Amanda pulled out our itinerary and we started reviewing the adventures to come:  a bike tour of Kyoto on the 29th, a food tour on the 30th, plenty of temples and traditional restaurants after that.  Sounds good, sounds good . . . umm, but wait a second, hold on -- how can the bike tour be scheduled for the day before the food tour, when the food tour is tomorrow and we aren't even in Kyoto yet?

After a moment of intense cognitive dissonance, Amanda sighed with relief and declared, "It's a good thing today is the 28th!"  As if saying it would make it so.  Because of course it wasn't the 28th -- we were just in denial that we had totally screwed up!  The food tour was tomorrow, which meant that today was the 29th (as confirmed by our train tickets and our iPhones) and that our bike tour through Kyoto would be leaving before our train even got there.

A few moments passed in silence as we processed what had happened.  In our pre-trip ambition, we had assumed that we'd take the early train from Tokyo, leaving us plenty of time to drop our things at the hotel and meet for a bike tour in the early afternoon.  Seemed perfectly reasonable back then -- why would anyone ever want to sleep in while on vacation?  crazy! -- only we had since abandoned all such ambition and had forgotten to check the itinerary to remind ourselves of what we'd committed to!

We decided that we should at least notify the tour agency of our delinquency and see if they could move us to a later date.  Then we sat back and submitted to all the forms of guilt-ridden self-flagellation that two perfectionistic, straight-A types having an existential crisis can muster (which is a lot).  How could this happen to us?  This is the sort of mistake that lesser mortals make!

But then -- THEN! -- we got an email back from the tour agency informing us that there would be impossible to move our tour to a later date (despair!) but that they would be willing to delay our tour to leave 30 minutes after our train arrived, giving us exactly enough time to take a cab to the rendez-vous point (elation! followed by despair! as we realized all the logistical hurdles that would make that 30-minute window all but impossible to meet -- we still had all our luggage, Amanda was wearing a skirt, there would be no time to check into our hotel, etc. -- followed by steely determination!).

What followed is Exhibit A in why Amanda and I can travel together so well:  Without saying a word to each other, we both moved into hyper-drive.  I pulled out my phone and started researching options for leaving our luggage at the Kyoto train station; Amanda quietly grabbed a pair of pants from her suitcase and set of in search of a restroom to change in; we transferred granola bars to our daybags; we corresponded vigorously with our bike agency to negotiate additional flexibility on the departure time, assurances that they would take care of our luggage, and detailed instructions on exactly where to go to get it all done.  Because come hell or high water this bike tour was going to happen!  Other people's incompetence (even if by "other people" we meant our former selves) wasn't going to stand in the way of our itinerary!

The rest, as they say, is history -- or, more precisely, a mad dash with luggage through a giant train station and pouring rain to drop our bags at the bike tour office and then find a taxi that would take us to the other side of town to pick out our bikes and meet Eriko, our guide. 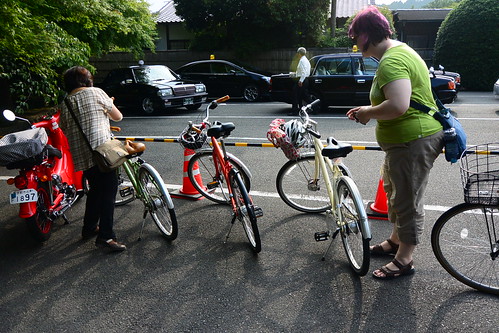 Once properly outfitted with bikes, helmets and impractical rain gear, we headed out into the streets of Kyoto. 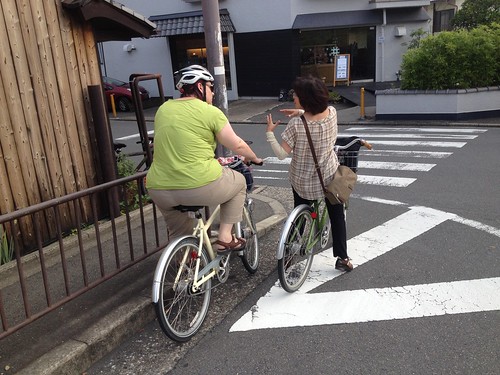 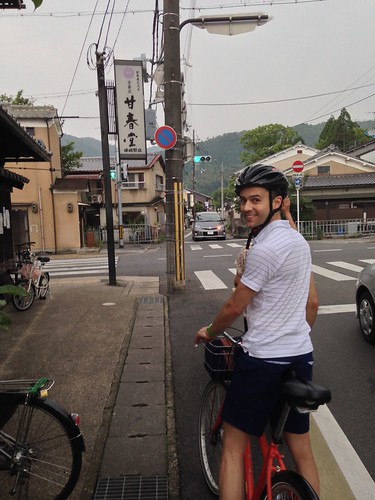 Our first stop was Kinkaku-ji, or the Temple of the Golden Pavillion.  Founded in 1397, this temple was destroyed by an arsonist and rebuilt in the mid-20th Century.  The top two stories (representing the samurai and Buddhist architectural styles) are covered with gold leaf.  The bottom floor, not gilded, is in the aristocratic architectural style.  The garden is magnificent, with numerous man-made ponds for reflection. 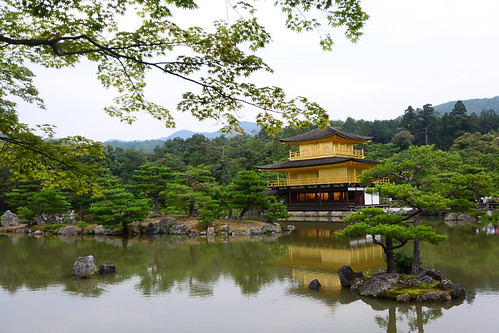 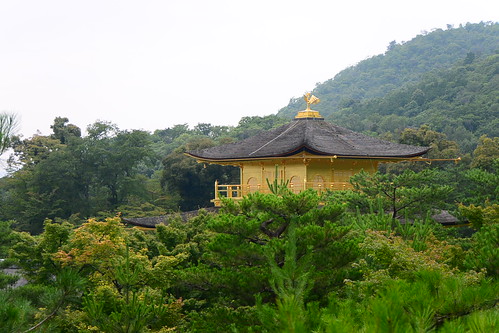 After leaving the Golden Pavillion, we cycled to Ryoanji, or Peaceful Dragon Temple.  The buildings here are less important than the zen garden, which is one of the most famous and celebrated gardens in Japan.  It was laid out by an unknown gardener sometime in the late 15th or early 16th Century.  It's just a flat rectangle of raked gravel, with fifteen moss-covered rocks scattered about.  It's not clear whether the rocks are supposed to symbolize islands in the sea, or mountains in the mist; but in any event you cannot see all 15 rocks from any place in the garden -- at least one is always hidden from sight.  This design feature is consistent with the Buddhist notion that it's impossible for anyone to see/know everything about the universe.  Something will always be hidden, only visible with a change in perspective.  (And speaking of perspective, the designer made the small garden look larger than it actually is by shortening the wall at one end.) 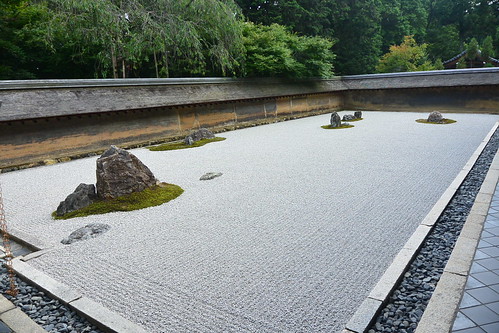 Erika next led us on a cycling detour through the countryside outside of Kyoto.  We meandered through ordinary residential neighborhoods until we came to a large pond and open rice paddies. 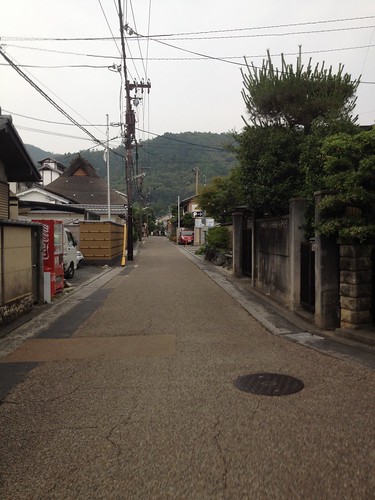 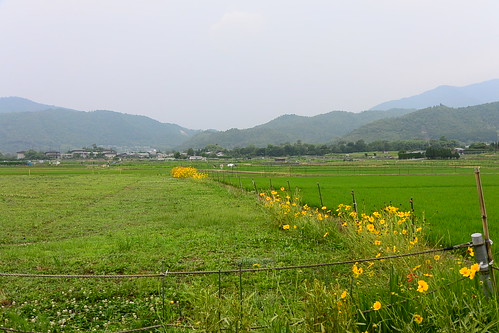 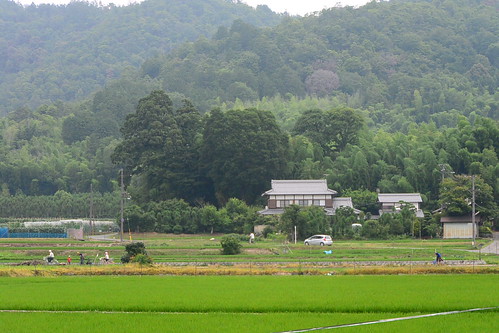 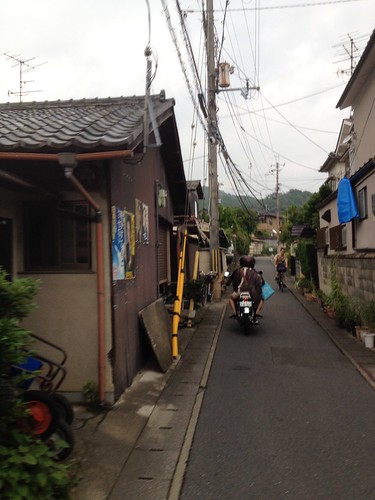 Leaving the fields behind, we came to the famous Bamboo Forest of Kyoto.  We arrived at dusk, so the light was dim.  It made a magical impression amidst the towering bamboo poles and deep green shade.  Miraculously, we got to see it when no one else was there.  (Normally the place is packed with visitors -- Eriko said this was the first time in the three years since she started giving tours that she's seen it without a crowd.) 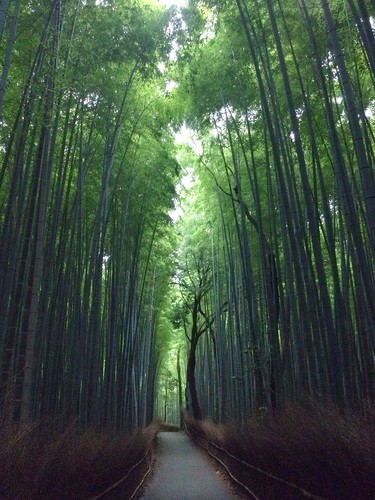 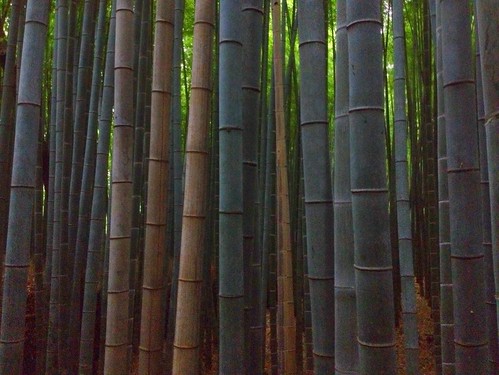 Our tour ended after the forest.  We dropped our bikes off with one of Eriko's colleagues and then caught the next train back to the main station in Kyoto so that we could pick up our luggage.  By then, of course, we were starving (there having been no time for lunch in our mad dash to keep the appointment with Eriko), so we took advantage of Eriko's knowledge to get some restaurant recommendations before we parted ways.

We decided to try the place that was closest to our hotel, a little neighborhood place called Kiraku that specializes in onomiyaki.  They're often called Japanese "pancakes" to attract tourists, I think, but they are more akin to a frittata or crustless quiche than a pancake. 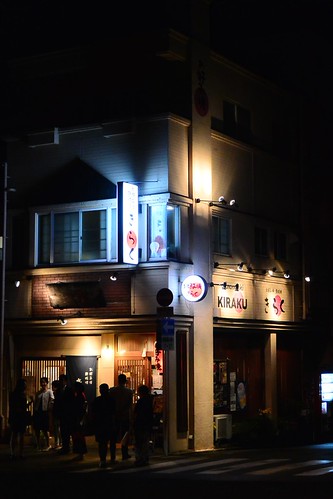 After dinner we came back to the hotel and stayed up super late blogging and then talking.  Because 2:30am never feels quite as late as it really is until you try to get up the next morning . . . . 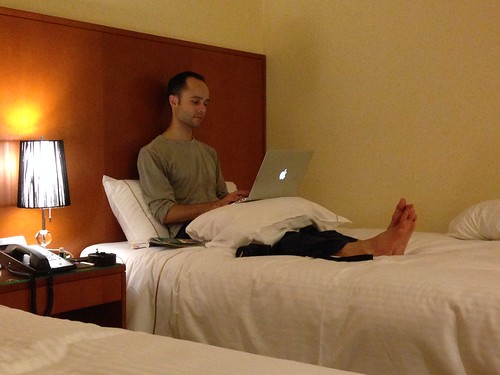