Amanda and I have a tradition of seeing bombastic American action films while traveling abroad (think Transformers III in Lima).  I'm not sure yet if we'll manage such a screening on this trip, but I think Mozart! das Musical -- a bombastic Austrian musical -- might be a near-perfect alternative.

We stumbled upon this treasure while taking refuge from the rains beneath the portico of the Sejong Center for the Performing Arts in downtown Seoul.  Having just barely outrun the deluge, we turned around and saw a giant poster advertising what could only be a glam-rock musical performed by K-pop stars.  There was enough guy-liner and angst to fuel a million teenage fantasies!  Of course we instantly purchased two tickets for our last night in Seoul.

On the evening in question, we changed into our finest theatre-while-traveling attire and headed out for a night on the town.  We started with dinner at Hangaram restaurant near City Hall that Veronica had suggested.

After dinner we had a leisurely walk to the performance hall, enjoying the rain-free evening.

The interior looked like a cross between a what I would imagine a Soviet bank to look like (did the Soviets even have banks?) and a casino.  Everywhere I looked, there were groups of teenage Korean girls posing for pictures in front of the publicity posters and cast photos. 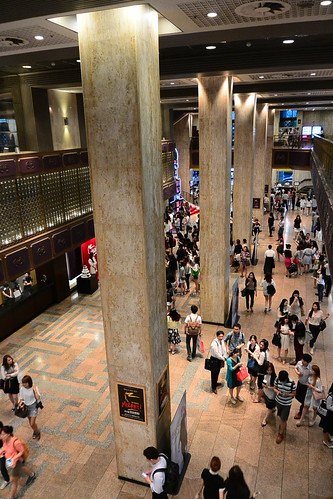 One of those posters gave a timeline of the musical's history.  How has this been happening for fifteen years without any of us knowing about it? 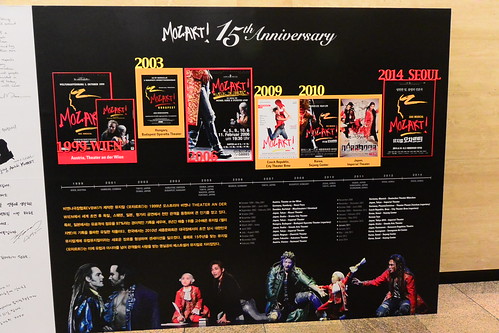 The auditorium itself was actually top notch.  We were in the nosebleed seats on the third balcony, but our view was still very good.  The giant pipe organ on the right gave some unexpected character to the room.


As for the show itself, what to say?  From a production standpoint, it was obvious that no cost had been spared.  The sets, costumes, lighting were all top notch.  And the performers were good, too.  Turns out you can do Broadway-style belting just as well in Korean as in English.  As for the music, well, it's a good thing those singers could belt, because that's all they did for the entire three hours of the show.  I kid you not, every single song was a power ballad that tried to bring the house down.  The melodies were also pretty derivative.  We recognized occasional references to Mozart's own music, but more often we just heard strains of Andrew Lloyd Weber.

And the plot?  Who knows -- it was all in Korean, so we had to interpret the spectacle.  It went something like this:

So there you have it:  Mozart was a vampire and was murdered by his childhood ghost.

The audience, of course, LOVED it.  Or at least they loved the performers.  The guy who played Mozart and the woman who played Marie Antoinette were clearly the beloved stars -- all the teenagers in the audience were beside themselves clapping and screaming and waving both hands in the air.  Down in the orchestra section, there was a whole crowd of teenage girls giving a super-enthusiastic standing ovation.  That in itself was fun to see.