Having begun our stay in Kyoto with a bike tour to some of the major sights, we thought it only natural that we spend the next day on a food tour to experience some of the local gastronomy.  We found the JD Kai Food Tasting Tour on Tripadvisor and booked it well in advance -- and after the itinerary snafu of the day before, we were careful to check and double-check the itinerary.

The food tour didn't start until 10:30am, so we made a pre-tour breakfast stop at an Italian coffee shop in the train station.

We arrived punctually at 10:30 and met our guide, Jason (a gregarious blond guy from Milwaukee who has been living in Japan for the past 11 years) and waited for the rest of the group to show up.  We waited, and waited . . . and waited.  An hour later, a harried looking mother and teenage daughter emerged from the train apologizing profusely for the delay -- apparently a third member of their party had taken ill that morning.  (Interestingly, given our own history of delays to food tours, Amanda and I were both remarkably charitable to these women -- hooray for lessons in patience!)

Jason gave us a quick introductory spiel and then marched us into the street and around the corner to a small shop where a little old lady sold fish cakes with various types of filling.  He taught us how to order in Japanese, and the proprietress kindly pretended to understand as she filled our orders based on what she'd heard Jason instructing us to say. 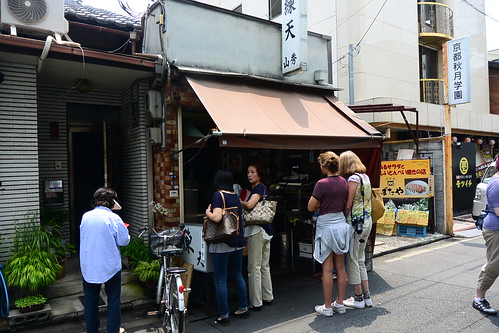 Leaving the fish cake shop behind, Jason directed us to a vast covered gallery lined with shops and crowded with shoppers and trucks alike (vehicles were permitted until noon). 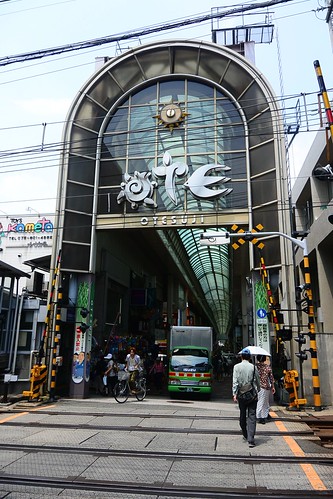 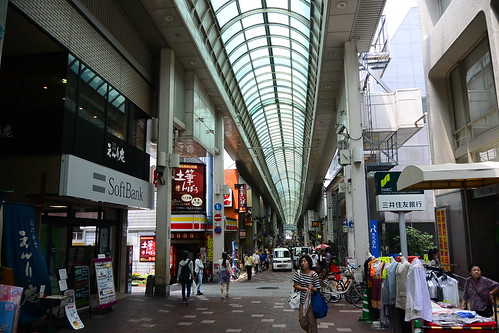 Inside, we headed first to a shop that sold little pastries filled with goodness custard or bean paste (of the red or white variety). 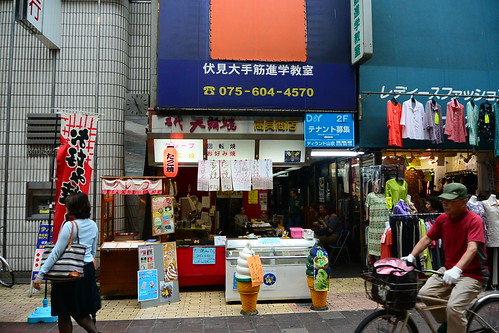 Next stop:  the butcher!  We didn't come here for the meat; instead, we ordered some croquettes.  I had one filled with curry pork, another filled with sweet squash. 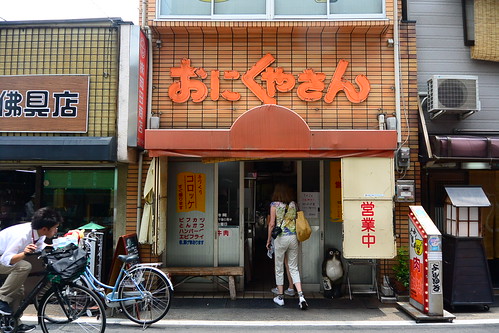 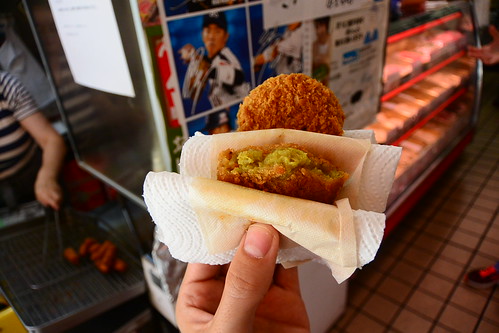 Jason explained as we went that he had built relationships with each of these shopkeepers over the past ten years.  He was clearly well-beloved by all of them, teasing them and asking about their families or fortunes as he went.  He claimed he stood out because of his sandy hair and blue eyes, but I think he'd have been universally popular anyway because of his cheerful gregarious personality.
We left the butcher shop and entered another, narrower shopping gallery.  Apparently this had once been an uncovered alley containing most of the town's food stalls, but efforts to modernize and westernize had lead to an influx of clothing shops (and an exodus of shoppers).  Still, there were a handful of venerable, family-run businesses still keeping shop here.﻿ 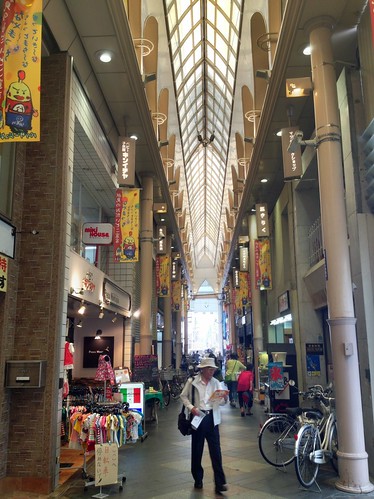 We started with a flowers-and-pickles shop that had been run by the same family for 14 generations (they started with flowers; pickles were added by the grandfather of the current shopkeeper).  The colors on both sides of the shop were gorgeous. 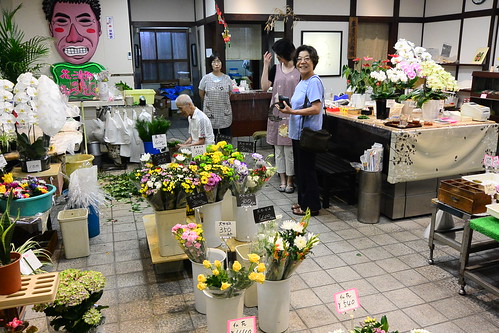 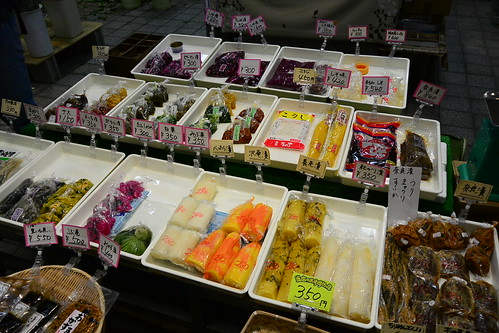 Leaving the flowers and pickles behind, we moved on to the freshwater fish shop.  Because Kyoto is land-locked, it relied on freshwater fish and eel instead of seafood.  Freshwater eel is a particular delicacy, so we had a bit of eel wrapped in eggs that were not cooked quite enough for my taste. 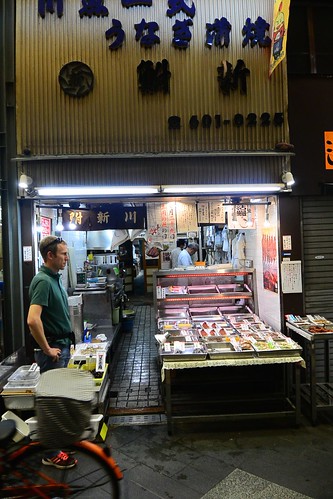 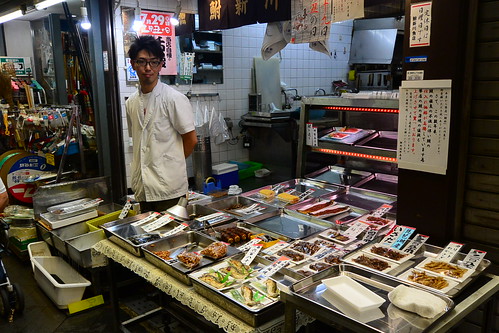 Thinking we had left the odd fishes behind, we entered this little delicatessen and were seated at a table in the back room on which sat trays with bowls full of delicacies. 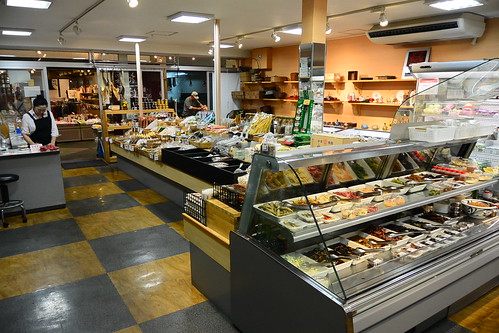 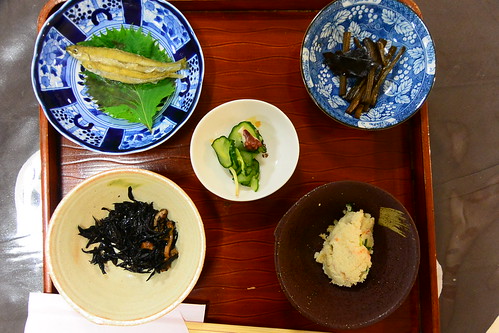 Next stop:  the dashi shop.  Dashi is the kelp and fish stock that is the foundational ingredient for most Japanese cuisine.  This guy sells all the ingredients for dashi.  We inspected the kelp, handled the dried fish (you'd have thought it was petrified wood), and sampled the delicate fish shavings that are used in making the dashi. 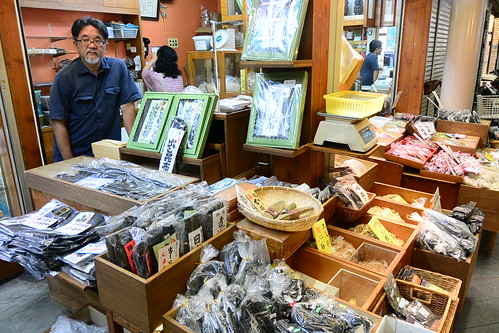 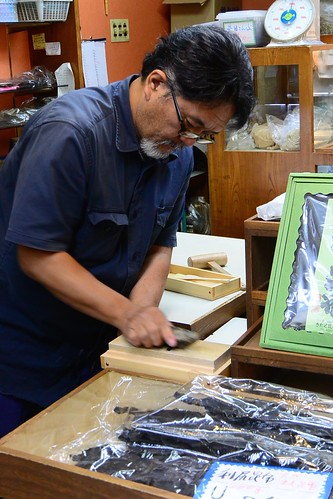 Leaving the dashi man behind, we made our way to an untidy seafood shop a few stalls down.  Here we were greeted by an ancient fish-seller woman and her daughter, who handed us plates of raw fish (it's not "sushi" because there's no rice). 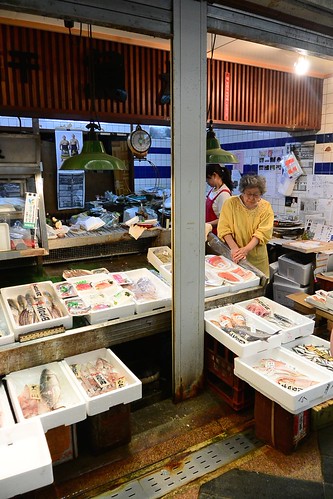 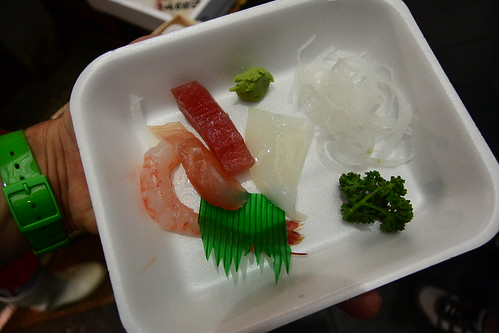 Then, as had happened in the flowers-and-pickles shop, the woman started coming out with more delightful treats for us to try.  And by "delightful treats" I mean tiny dried fish with eyeballs. 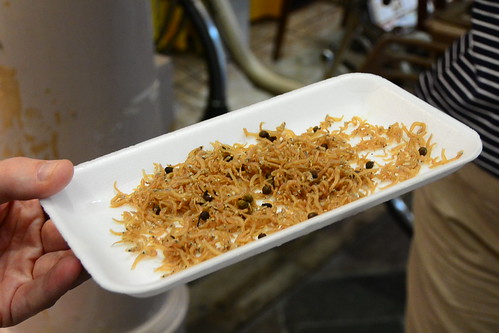 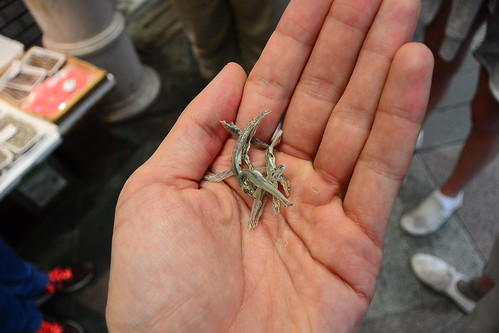 Last stop on the tour was an ancient tea shop filled with rustic bins of tea (lined with tin to preserve the tea) and some glutinous sweets.  We learned about the different kinds of tea in Japan and how they're made. 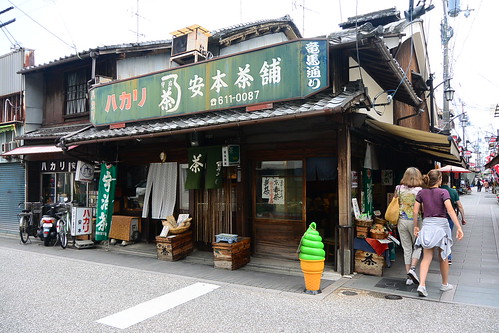 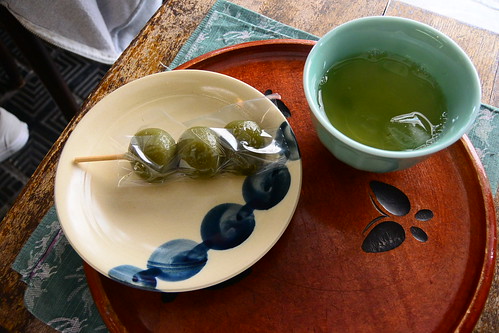 That was the end of the tour.  Jason answered a few more questions as he walked us back to the train stop and we all headed our various ways.  What a great way to learn more about the food and food culture of Japan!
﻿
Posted by JJD at 9:01 PM

Hi, I was just doing some research to put together my own blog post about this tour as I did it two weeks ago and had forgotten some of the details. I just want to say how awesome your post and pictures are and hope you like the tour as much as we did - looks like you did!