By the time we escaped from the Maid Cafe, we were both starving and crashing from the sugar high we'd gotten from those brightly-hued sodas.  So we set out to find something a bit more substantial for dinner.

One option caught our eye for sheer outlandishness -- but chasing a disgusting purple potion with what appeared to be a spiral sausage served on French crullers seemed like a life choice we would live to regret.

After a few more minutes of walking, we came upon a shop that looked decidedly Japanese. 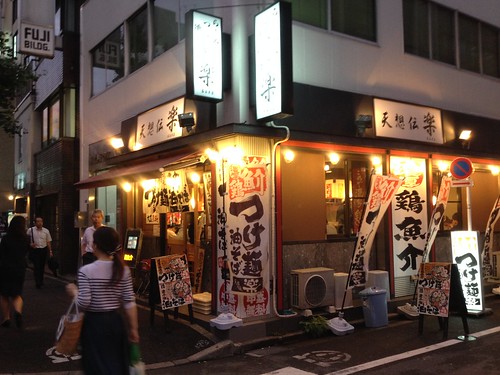 We peered inside:  A counter of solitary men eating some sort of noodle . . . 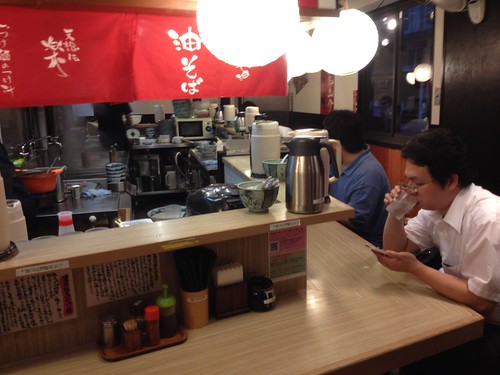 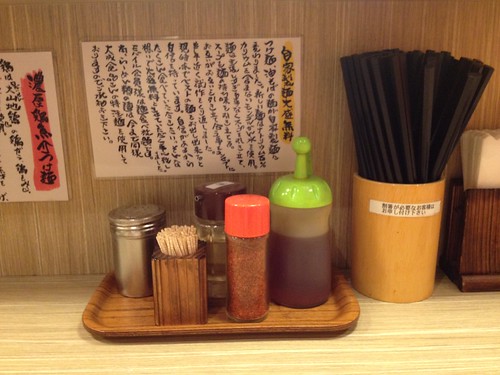 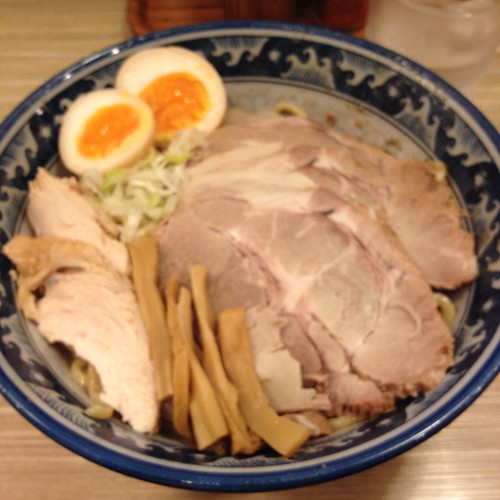 I ordered the large bowl without knowing that a large bowl could feed a family of 4 for a week.  I plugged dutifully away at it until I could hardly eat another bite -- and then the chef reached over the counter and offered to transform my remaining noodles into a soup!  Voila, dinner number two!! 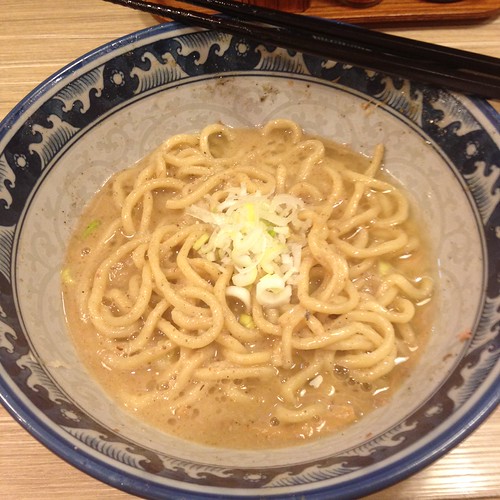 I made a valiant effort to eat the soup, but I barely made a dent.  I was already so full, and the soup was not exactly light:  Whoever thinks Japanese food is all healthy and stuff clearly has not had this soup.  It was heavy and fishy; not terrible, but definitely not something I was willing to gorge myself on.

With our tummies full of ramen and our minds still full of crazy French maids, we started back to the subway.  Only we got side-tracked by a stand selling mochi. 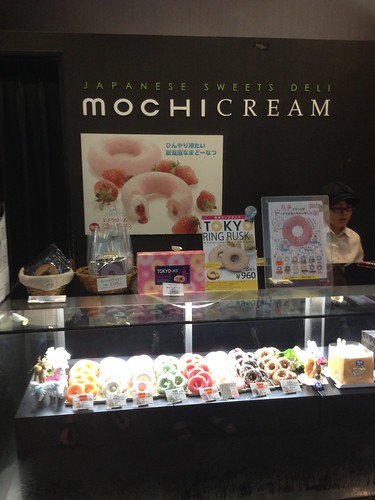 It looked an awful lot like the French macaroon shops we saw in Paris (and everywhere in the US ever since the macaroon fad hit).  Only Amanda explained that they're totally different from macaroons -- these colorful little balls are made of a glutinous rice paste with ice cream and other flavorful fillings inside.


I bought an "orange cheese" mochi, which tasted like orange sherbet with cream cheese filling.  Delicious! 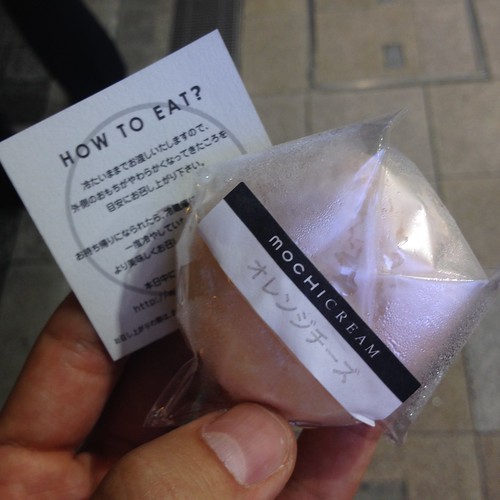 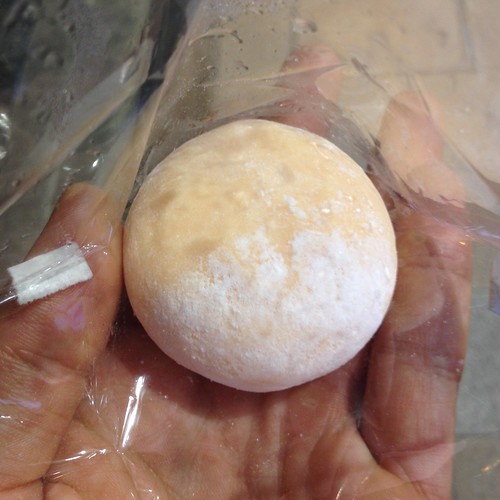 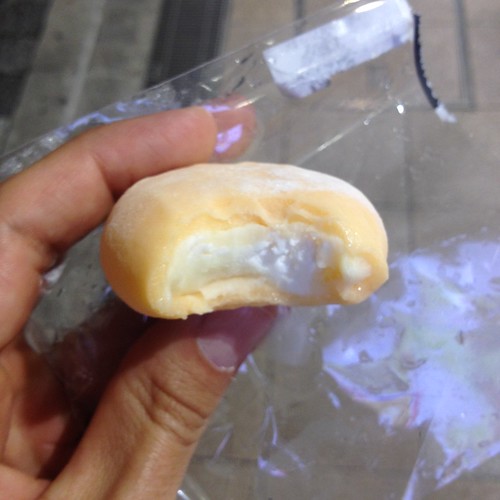 While we waited for our mochi to melt a bit before eating (the melting makes them chewy; otherwise it would be like eating a rock), we walked around Akihabara some more, soaking up the nighttime ambiance.  Think kind of like Times Square, only not on steroids. 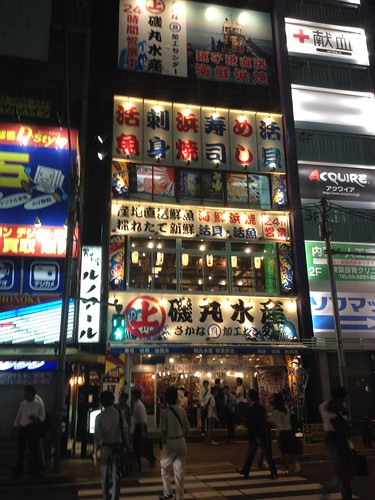 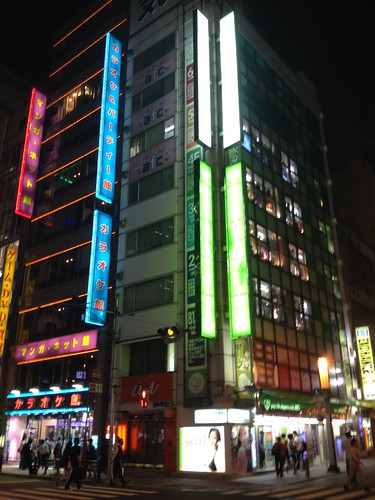 Then we found the subway entrance and headed back to the hotel for the night.  More adventures tomorrow! 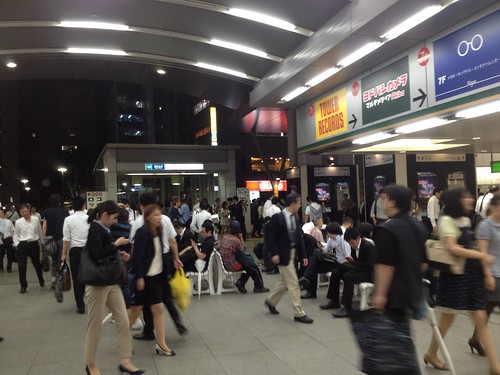 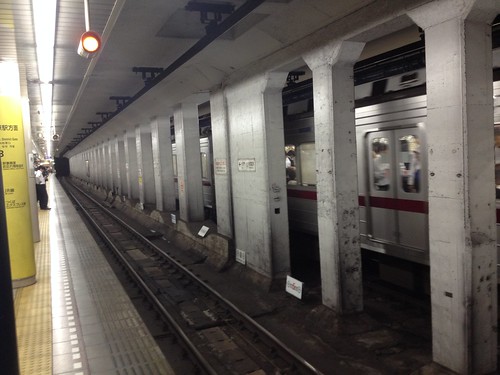 Ben says that American food is super hip in Japan right now. Probably explains why you are seeing so many "Hahmbugu!" options.

Yes! Mari told us American food is super in right now. We've seen everything from a high-end American restaurant by Wolfgang Puck on the Takeshita-dori to Denny's (there's one across the street from our hotel in chic Ginza!).