In my opinion, that there's no better way to get to know a new city and a new culture than by spending a day eating your way through town.  Palaces, temples and museums are wonderful -- and don't worry, we'll get to those soon! -- but for now, let's see what people eat in Seoul.

We started the day with a breakfast at one of the ubiquitous Paris Baguette Cafes.


The pastries were delicious and filling -- we both had to wrap a couple to go, that's how full we were -- and so we set out into the steamy city to see what we could see.  Turns out, one of the first things we saw was a shop selling freshly cooked Belgian waffles.  Second breakfast!


By the time we had finished our waffles, we had about an hour to sight-see until we met up with Veronica for a food tour through Insadong, one of Seoul's more vibrant neighborhoods.

We started with lunch at the Insa-dong Tofu Restaurant, which was nestled in a tiny back alley where we never would have found it on our own.

Leaving the tofu restaurant, we wended our way through more tiny streets, past many shops and restaurants in low-slung traditional Korean houses until we arrived at Koong, a traditional dumpling restaurant.  Veronica ordered a plate of mung bean pancakes and a plate of pork dumplings, both of which were really delicious.

That hour between meals ended up being more like an hour and a half.  Veronica led us on a scenic walk through one of Seoul's historic neighborhoods.  We were waylaid by rainstorms, and foiled twice by shops that were closed on Mondays.  (Having only just learned that Amanda and I don't drink, Veronica was improvising, trying to find a good place for non-alcoholic desserts.)  Eventually we returned to a place very near where we started, in Insadong, where the specialty was sweet red bean desserts. 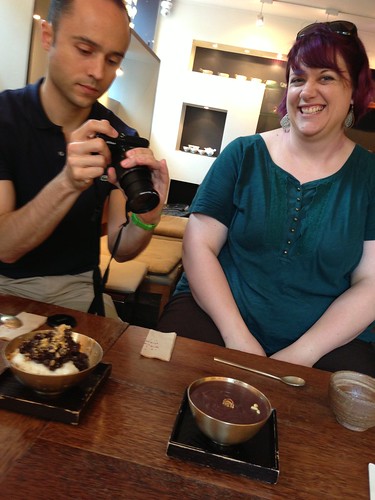 It was six o'clock by the time we finished our food tour.  Veronica helpfully suggested some places for dinner, only we really were so full by then that we couldn't imagine sitting down for another meal.  So we walked through the city, taking in the now rain-free ambiance on our way to an evening theater performance (more on that separately).  The theater was in a lively part of town with street-food vendors everywhere.  By the time the performance ended, I had digested enough of our earlier meals that I could try out a skewer of sausages.


This won't be the end of our gastronomical adventures in Seoul.  Before parting ways with Veronica, she promised to send us recommendations for every remaining meal during our stay.  Can't wait to discover more Korean food!
Posted by JJD at 12:00 PM