At 5:00pm sharp, we emerged from the Shintomicho subway stop and looked around.  We saw four other non-Japanese-looking people standing awkwardly a few feet away.  "Are you guys here for the cooking class?" we asked.  Four nods, six introductions, next thing we know a young Japanese woman named Mari shows up and ushers us all into a tiny studio apartment on the 13th floor of a nearby apartment building.

Mari's task tonight:  teach us how to cook a simple dinner consisting of salmon, potato pancakes and miso soup.

Mari handed us aprons and seated us around the table.  She gave us a quick overview of the menu and a few of the more exotic ingredients.  We learned, for example, that there are about 150 different kinds of seaweed used in Japanese cooking, including quite a few different varieties of kelp (of which we got to smell and handle two).  We also learned that miso is a fermented soybean paste, and that there are a million different varieties of that, too (we got to see three).

Once the overview was finished, Mari started handing out assignments.  Taj started peeling the potatoes, while Wendy, who was born without a sense of smell, chopped onions. 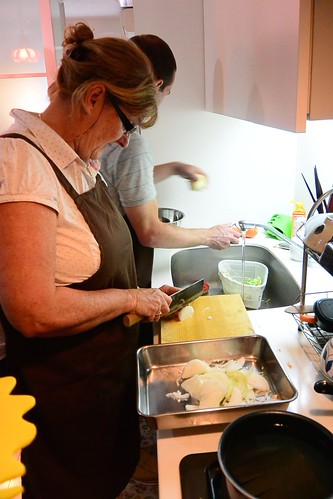 Marilyn was deputized to chop the bell peppers . . . 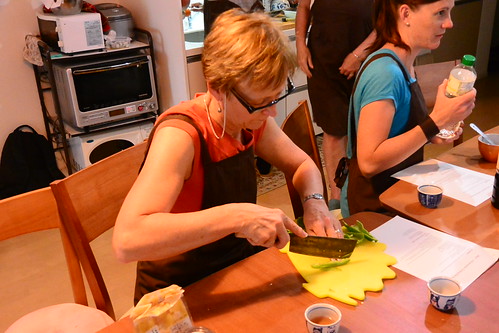 and Amanda took over the carrots. 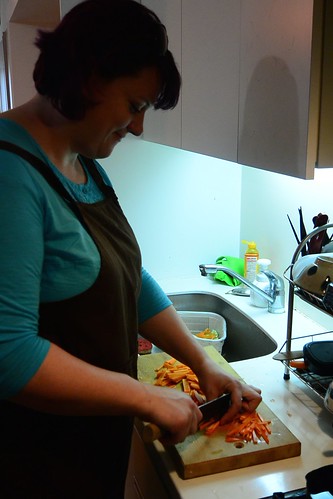 Laura and I sat down to make the sauces for the salmon and the potato pancakes. 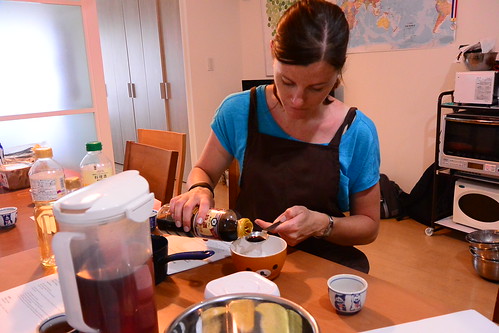 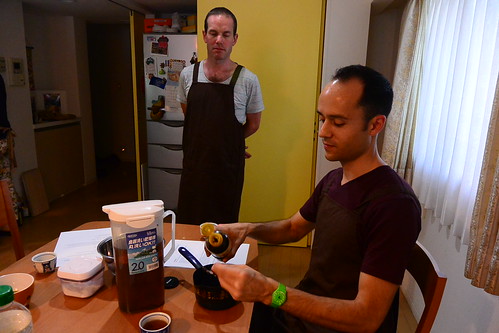 When Wendy had finished the onions, she got the similarly unglamorous job of checking the salmon for bones.  There were a few. 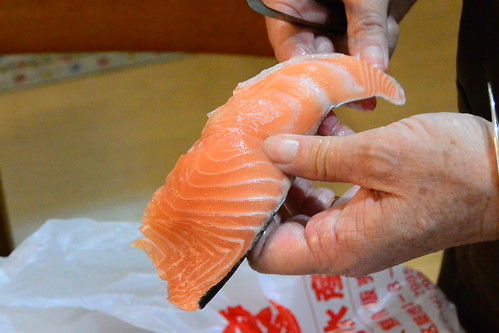 Then we moved to the stove, where Mari explained how to make the broth for miso soup and pan fry the salmon. 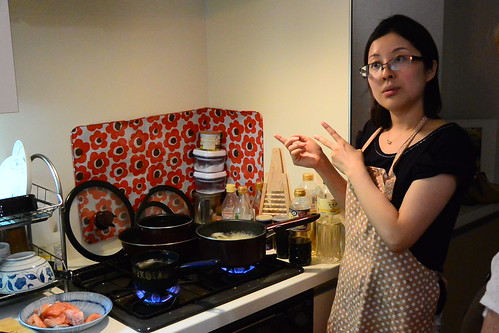 Then she handed the operation back over to us.  Cooking the salmon quickly became a four-person job. 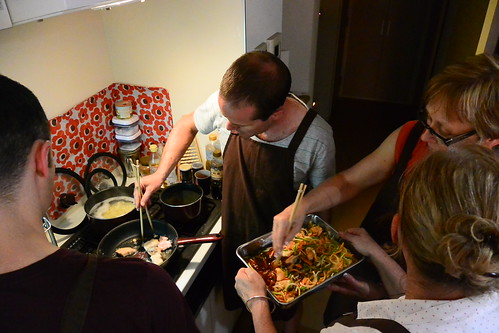 In case you're wondering, we pan fried each piece of salmon after it had been coated in a dusting of potato starch.  Then the pieces of fish were placed amongst the julienned vegetables, to marinate in the vinegary sauce that I had made earlier. 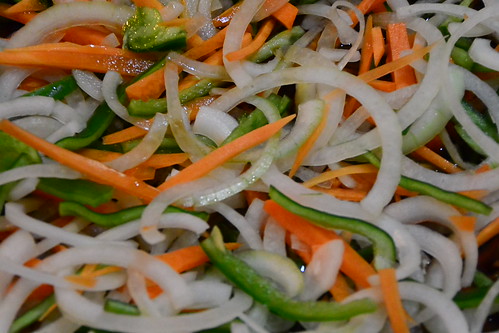 Part-way through the preparations, someone came back from the bathroom exclaiming over the cleverness of the sink arrangement.  I had to check it out:

When I returned to the living room, I found everyone gathered around a map.  Someone observed how this version of the map placed Japan at the center of the world.  From there the conversation wandered from how the maps differ in our respective countries of origin (basically each country tends to put itself in the middle) to where we've been and where we want to go.  I never would have thought of it, but hanging a map where your international guests will be?  You couldn't ask for a better conversation piece. 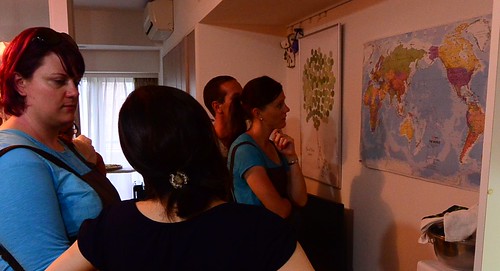 But our map conversation was only an interlude -- dinner was still a-cookin'!  The potatoes needed mashing . . . 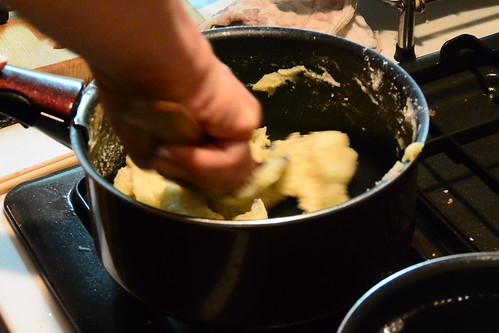 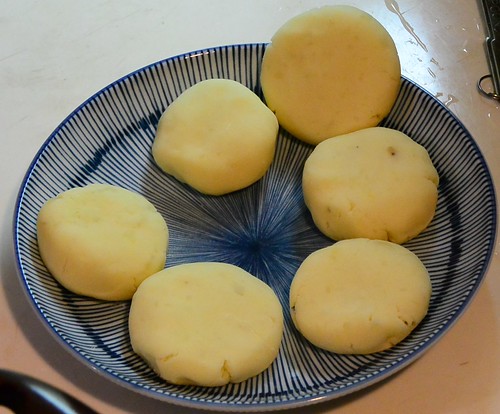 And the kelp needed to be pulled out of the broth so that the bonito fish flakes could be added. 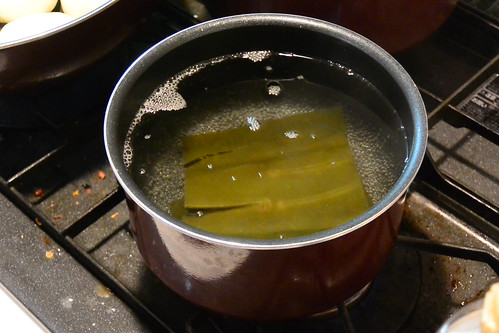 The potato balls were placed in the pan to fry, and the mushrooms were added to the broth. 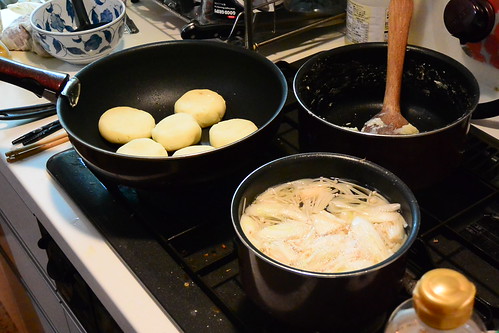 Then the finishing touch:  stirring in the miso.  We learned that miso is a delicate substance and should be left to the end and never boiled. 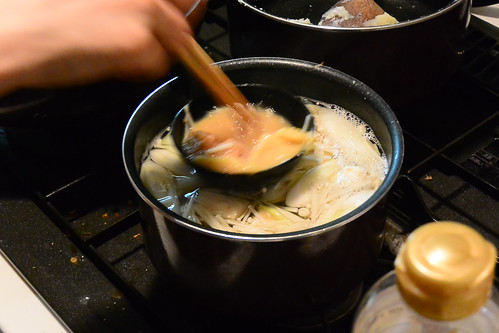 And then voila -- dinner was served! 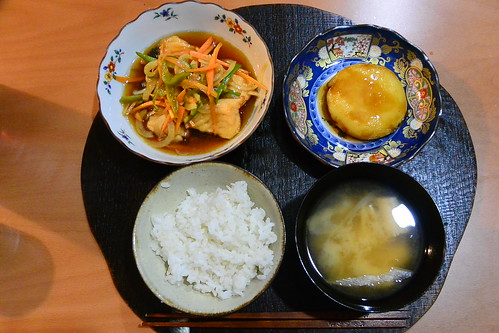 This is how a Japanese meal is always served:  The miso soup and the rice go at the bottom (or front) next to the chopsticks, and the main dish and side dish are placed above them.  It's considered bad manners to spill anything on the table, so you drink the soup from the bowl and then pick up the remaining ingredients with your chopsticks.  And for the other items, you hold the rice bowl mid-chest and raise the food to your mouth passing over the rice bowl.  As for the order in which you eat your dinner, there is no concept of "starter" and "entree" -- everything is served at the same time, and so you start by eating what ought to be eaten hot (in this case, the soup and the potato pancake).

In case you're wondering, it was all really delicious.  The sauce on the potato pancake was amazing and probably addictive, and I loved everything about the salmon dish.  I could have eaten that all night.

After we had finished eating, we sat around talking for a while as if we were all old friends.  The Aussies asked for recommendations on things to do and where to find a good onsen.  That led to a lively (and hilarious) conversation about public nudity and our various cultural weirdness about our bodies.  Then we all packed up and bid fond farewell before heading back out into the night.

The night was lovely and the distance short, so Amanda and I just walked back to the hotel. 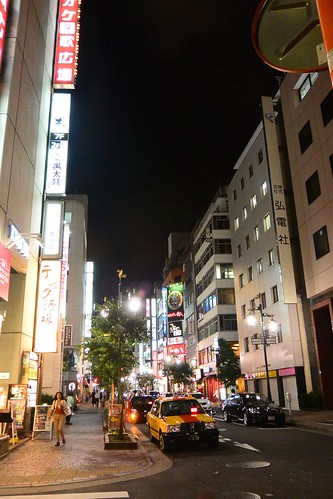 What a great experience. Love the sink. Lady

I haven't seen dashi made that way before. Typically, (in my experience), the kombu and bonito flakes are cooked together and then the dashi is strained out. This is because the kombu/bonito matter can be used to create a second batch of dashi.

That said, it looks like there were bonito flakes in the miso soup? That could be yummy and would explain the discrepancy.

We removed the kombu before adding the bonito (so the kombu could be used again), and we strained out the bonito flakes after only a few minutes (no reusing those). Then we added enoki mushrooms and spring onions to the dashi before serving.