We got naked again today!  This time in pursuit of that quintessential Japanese experience: the onsen.

Japan, as you know, is part of that volcanic "ring of fire" that surrounds the Pacific Ocean.  As a result, it has not only beautiful volcanoes (see Mt Fuji) but also about a million hot springs.  These hot springs -- or onsen -- have been put to good use by the Japanese as an excuse to get naked together.  True, the ostensible purpose of the onsen is to bathe oneself in the mineral-rich water.  But they also play an important social function.  We learned from Mari (our cooking instructor) that the Japanese use the onsen as a way to overcome their typically reserved interpersonal relationships.  For example, a company looking for a team-building activity might take a group of employees to an onsen.  After all, nothing breaks down hierarchies and social awkwardness like running around with your boss in your birthday suit!  They even have a term for the type of relationship that can emerge between colleagues from such an outing: they call it a "naked relationship."

To experience an onsen, Amanda and I left early this morning for a day trip to Hakone, a resort town famous for its onsen about an hour's train ride from Tokyo.  We began the trip by procuring our JR Rail Passes -- these seven-day passes are available only to foreigners and give unlimited train travel on the Japan Rail network of trains.  With the amount of traveling we plan to do over the next week, it's a great deal. 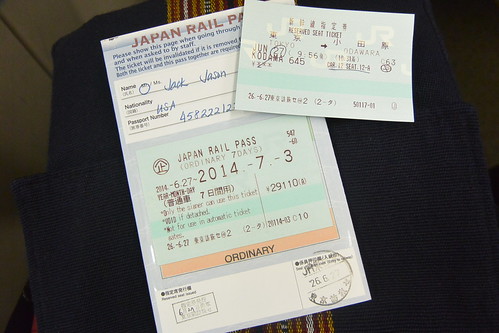 For the principal leg of the trip, we rode in the shinkansen train, Japan's version of the high-speed bullet train.  It was gorgeous and very fast.  (Why, oh why, can we not get our act together and start building these things in the US?) 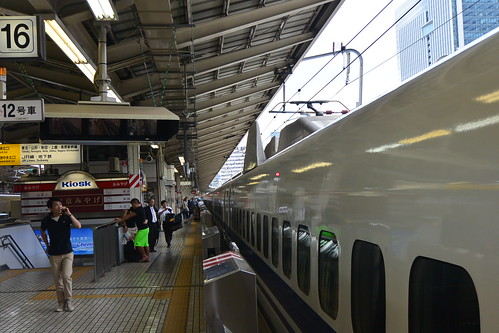 We were soon speeding through the first open countryside I'd seen since coming to Japan. 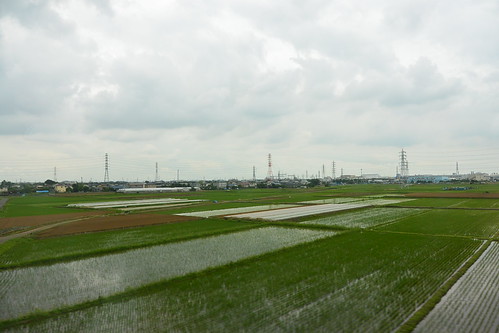 When we got to the town of Odawa, we had to switch from the bullet-train to the slower local train to Hakone.   We quickly found the line we needed . . . 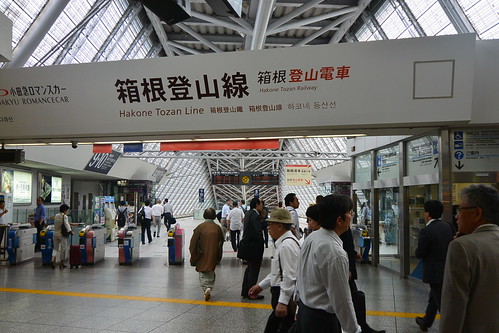 . . . but since this train was not part of the Japan Rail system, we needed to buy a new ticket.  Not exactly an easy task when pretty much everything is in Japanese characters only. 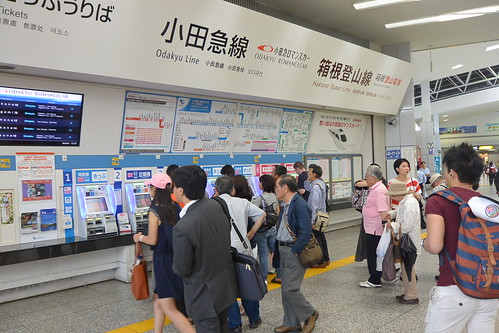 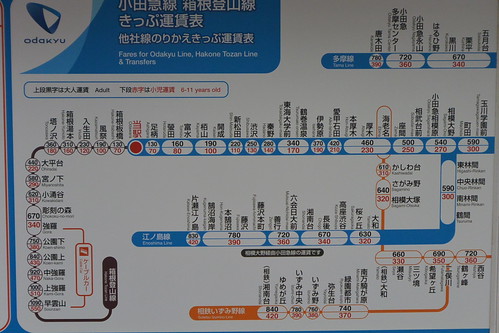 Eventually a helpful railroad person took pity on our befuddled selves and helped us out.  After that we just needed to find the right quay.

As intriguing as the "Romancecar" sounded, our train was on the other side of the platform.  A cheery red thing that promised a slow ride to Hakone. 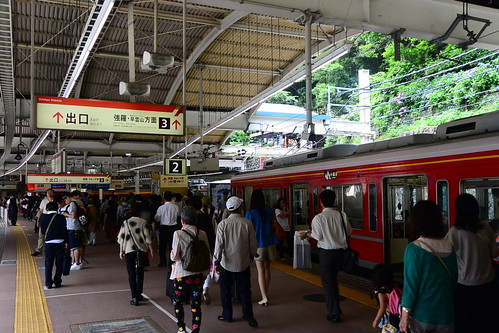 Half an hour later we pulled into Hakone station.  It was a narrow town, nestled between steep, heavily wooded mountains, and it had that sense of anticipation and unimportance characteristic of towns that are the jumping-off point for larger expeditions.  (It felt distinctly like the town we stayed in the night before we climbed up to Macchu Picchu.) 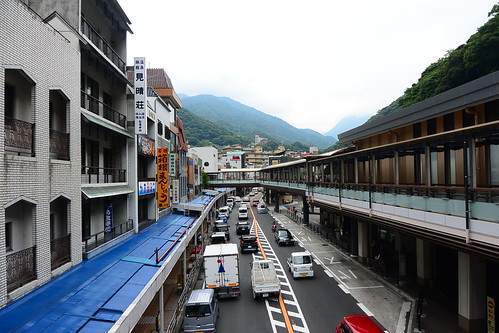 The onsen we were looking for was part of a large hotel called Tensei-en.  We found a local bus driver that knew the way and had him drop us at the entrance. 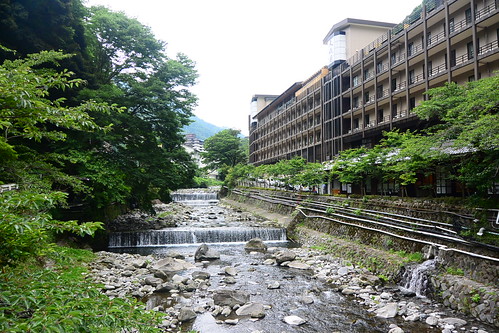 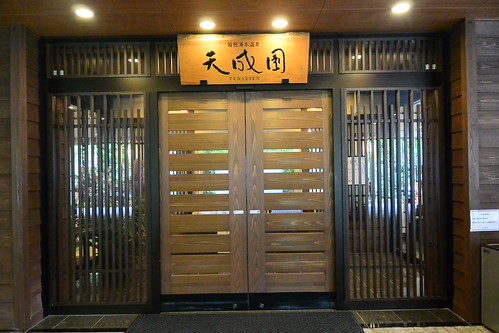 Immediately inside the door we were instructed to remove our shoes and stow them in these tiny cubbies. 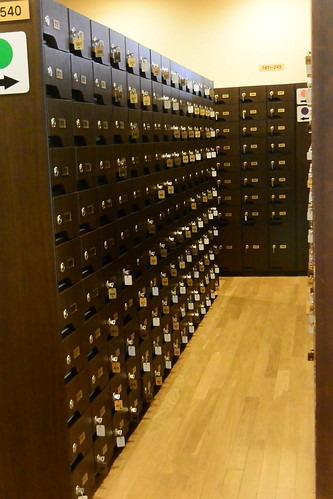 Once properly barefoot, we entered the lobby and were greeted by mounds of purple hydrangeas and a swarm of enormous koi.  (I resolved once again that one day I will have a koi pond of my own!) 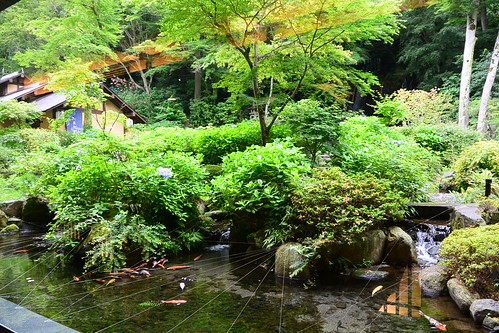 We checked in at the desk and were issued a wristband, two towels and a kimono.  The attendant, who spoke basically no English, then gestured for us to go upstairs.  Amanda got off on the 6th floor; I went to the 7th.  After that, it was pretty much business as usual:  Clothes off, rinse in the shower, soak in pools of varying temperatures, sweat in the sauna, cool off on the ledge, go back and do whatever felt good again.

Photography was prohibited, of course, but I found a billboard that showed the men's outdoor bath area.  This was my first outdoor bathing experience, and I really liked it.  Felt free, you know?  Also a tad exhibitionist -- while the management had thought to raise a privacy screen around the perimeter to ward off roving eyes of neighboring hotels, they didn't account for the fact that said neighboring hotels are several stories higher than the one we were in . . . .

The vigorous scrubbing that we had in the Korean baths aren't part of the traditional onsen experience.  Korean body scrubs were available, though, for an additional fee, as were a variety of massages and other treatments.  After soaking for a while in the baths upstairs, I went down and met Amanda on the massage level -- we decided to splurge and each take a sixty-minute massage.  Amanda opted for the oil massage; I went with the traditional Japanese shiatsu massage.

The massage was wonderful in all ways.  (So much better than that stressful one I had last year in Cambodia!)  The shiatsu technique relies on rubbing and pressure points, all through a layer of clothing (I kept my kimono on the whole time).  I told my masseur (through a series of pantomime) that I wanted him to focus on my legs, and he surprised me by finding all the tightest spots that I knew of and really digging into them.  It was painful at times but also incredibly relaxing.  By the time I finished, I was in that wonderful quasi-sleepy place, almost as if I had just awoken from a long nap.

I headed back upstairs for another quick soak in the pools and then got dressed again.  I loved the rows of vanities and the various products they offered.  I was the only one in the dressing room at the time, so I snuck another photo in the mirror.

Once again clean and sweet-smelling, and deeply relaxed, I went down and met Amanda.  From the peaceful glow on her face, I could tell her massage had been similarly restorative!

Unfortunately peace and relaxation are no substitute for food, and by this time both of us were starving.  We decided to forego the bus and walk back into town, looking for food on the way.  We soon came to an odd building with an alarming giant bunny rabbit on the roof. 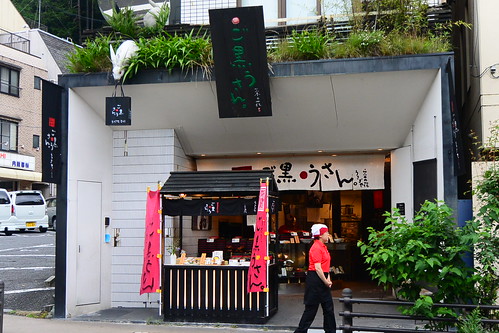 A woman in the sidewalk stand was hawking small round delicacies that appeared to be sweets. 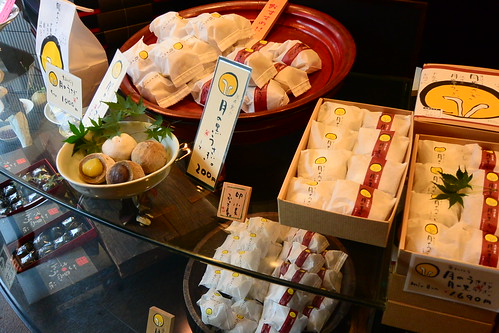 We each bought one.  They were cutely wrapped (everything here is cutely wrapped), but the taste wasn't quite as satisfying.  We couldn't tell what the outer substance was, nor the inner core, but we knew enough to identify red bean paste in the middle layer. 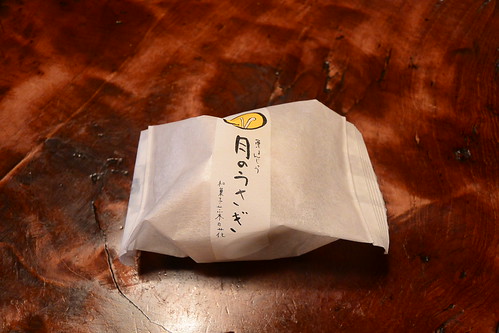 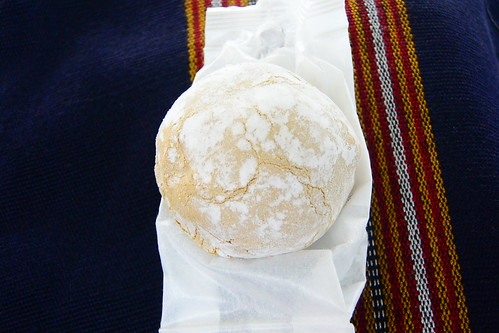 One sweet does not a tummy fill, so we resumed our search for something more substantial.  Soon we came across a little restaurant with dishes full of soba noodles displayed in the windows. 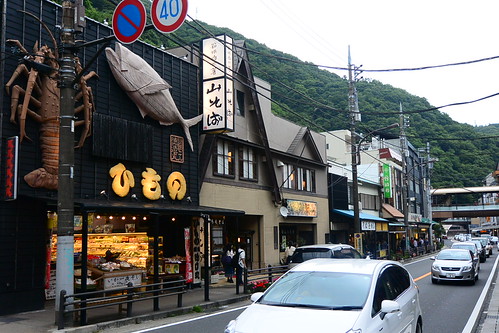 Soba noodles!  This rang a bell:  During our cooking class Mari had encouraged us to try the soba noodles if we went to Hakone.  Apparently the water in Hakone has peculiar qualities that make for particularly good soba noodles.  We both got a bowl of soba noodle soup with tempura fried giant prawn. 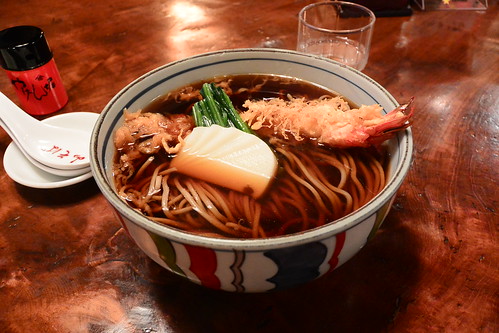 I'm not enough of a noodle connoisseur to say whether the noodles were unusually good, but they were very tasty and filling.  And I think I'm making moderate progress at eating soup with chopsticks without coming away looking a mess.  Needless to say, with a full belly and massage-relaxed limbs, I slept soundly on the train ride back to Tokyo!
Posted by JJD at 10:45 AM