Guatemala City is only 2 hours and 19 minutes from Miami.  Aside from an obnoxious woman's stealing my aisle seat and refusing to give it back without making a scene (which meant that I was stuck with her middle seat because I wasn't willing to make a scene), the flight went well.  I read the latest issue of Foreign Affairs (a fascinating series of historical-theoretical articles about the strengths and weaknesses of democratic capitalism and its fascist/marxist/authoritarian alternatives) while listening to the Mediaeval Baebes on my iPod (yes, it's trash, thanks for judging me) and drinking Diet Coke (they gave me the whole can, again!).  By noontime we had landed in Guatemala's capital city.

﻿
﻿
I wended my way through passport control and customs, collected my bag (which, thankfully, had made it to Guatemala just fine, despite the overnight layover), and met Jennifer and Mark outside the terminal amidst the crowd of welcomers, peddlers and beggars.  It was great to see them -- a tad surreal, given that I was used to seeing them in DC, not in a third world country.

All of us were hungry, so we drove over to a new upscale development of shops and restaurants called Cayala, which offered great views over the city... 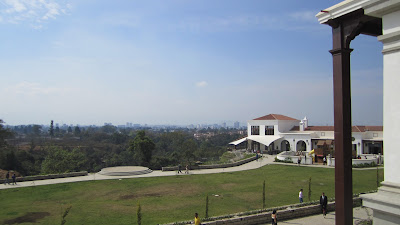 ﻿tasty lunch options (we went Mediterranean and were served by someone who may have been Saddam Hussein's brother)... 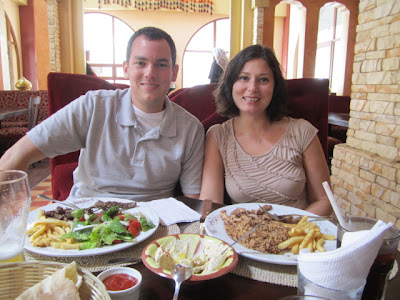 and a good-faith attempt at a French patisserie. 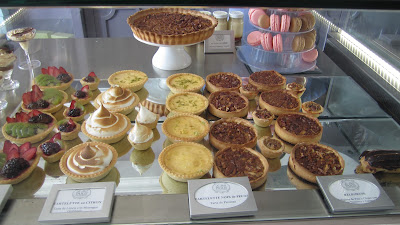 I skipped the depressed-looking macarons and opted for the mini lemon tart. 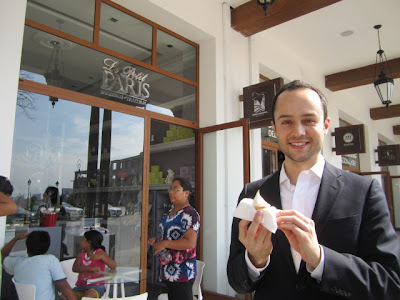 By the way, I promise that my wearing a white shirt and blazer while on vacation in a third world country was an accident -- I hadn't realized until too late that while I would be laying over in Miami, my bag was checked all the way to Guatemala City.  So I'm wearing what I wore to work yesterday.  (It is, however, yet another example of what a bad hippie I would be.  If I wanted to fit in with the American backpackers, I should be wearing a dirty tunic and "indigenous" pants that no one who is actually indigenous would be caught dead in.)
After lunch we headed back to the apartment so that I could change clothes and freshen up.  Then we headed out to "O", a new design center nearby.  On the outside, it looked like a cross between a nightclub and a billboard. 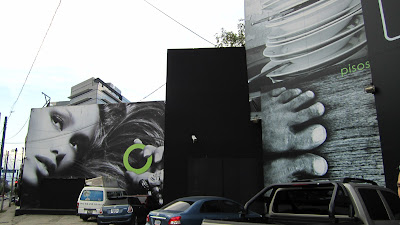 On the inside, it had over-the-top showrooms full of all sorts of awesome furniture, much of which was familiar to me from the design magazines I read.  The chaise featured below is an example.  (Unfortunately, photography was strictly forbidden, so I wasn't able to play with the shot enough to capture the full glory of the pink-and-black-and-gold motif in this room.) 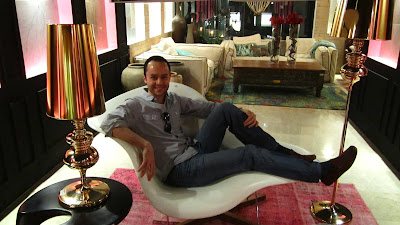 We'd originally planned to spend only about ten or fifteen minutes in the store -- that's how much time we had before they closed.  Over an hour later, however, we were still wandering through the labyrinthine showrooms.  Turns out billboard-comme-nightclub had more in common with the layout of a haunted house.  We worked our way ever deeper into the maze, upstairs and downstairs, past marble slabs and cow-hide-covered credenzas and "ethnic" (code for "Asian") cabinets -- and the further we went, the more disoriented we became.  I was certain that we'd eventually run into the Minotaur or David Bowie (preferably both).  That or the search and rescue would eventually find our huddled bones somewhere in the bathtub department.  Needless to say, by the time we found the Exit sign, it reflected our feelings exactly. 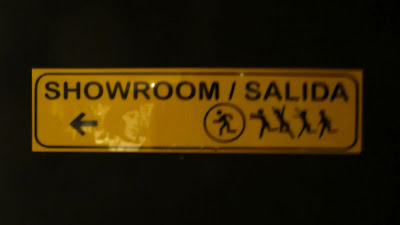 Once we'd escaped the clutches of awesome furniture, we headed to Jake's restaurant for dinner with some of Jennifer's and Mark's friends -- all of whom, I was assured, were "normal."  One couple's last name was "Outlaw", which is both awesome (because, really, who doesn't want to be able to say that they're having dinner with the Outlaws tonight?) and ironic, because the guy works for the Drug Enforcement Agency and therefore spends his time chasing down bigtime outlaws.  He entertained with stories about catching the cocaine runners who try to smuggle the stuff in from South America on its way to Mexico.  The other couple (whose name was long and vaguely Italian) had a less adrenaline-filled life -- he worked at USAID with Mark and had just moved to Guatemala City from Nairobi (which apparently is less nice than Guatemala City).  It was fun (and frankly very appealing) to hear about the lives of expats my age.  Such a different milieu from where I currently am, but one that I could easily see myself enjoying.

The light was bad for photos, but the food was delicious.

What a contrast! Lady

Yay! The beard is back!