A few weeks ago I saw the Shakespeare Theatre Company's "rock opera" version of Two Gentlemen of Verona (and I didn't like it).  Tonight, I saw them do the actual Shakespeare play -- and I liked it much better. 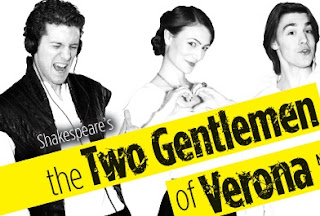 Given the current hour (it's past 1:00am already!), I won't take the time to write out a synopsis -- especially since you can get one here.

What I liked about this production was the following:

First, it was set in an edgy, hipster version of the modern day that made the play feel current and emphasized the fact hat this is a tumultuous romantic comedy about teenagers figuring out love, friendship, ambition and loyalty.

Second, it had very dark undertones and provided an interpretation of the final scene that finally made sense to me.  Suffice to say that there are two men vying for the same woman's love.  The first guy has been loyal and honorable; the second guy has been disloyal, dishonest, violent and kind of a creep.  And yet in the final scene, the first guy relinquishes his claim to the lady's love, giving her to the second guy -- a move that I've always found entirely implausible.  This production, however, pushed the conflict between the to men to serious violence, to the point where the second guy was on the verge of committing suicide after realizing how despicable he'd been.  So the first guy's offer to give up his fiancee was an act of desperation to stop further atrocities, rather than a magnanimous gesture of forgiveness (and macho horse trading).  I hadn't thought of that reading before, but I liked it.
Posted by JJD at 1:23 AM