Wagner and the anatomy of the heart

Grandpa Davis -- who found his calling in life as a radiologist -- likes to joke about peering into the black-and-white world of x-rays in search of the colloquial "cockles of the heart."  As far as I know, he never found them.

I'm starting to think that x-rays may not be the right place for the secrets of the heart.  The more I listen to Wagner's operas, the more convinced I am of his genius:  Outside of certain spiritual experiences, his music touches my heart more intimately than anything else I've known.

On Saturday the Metropolitan Opera broadcast a live performance of its new production of Gotterdammerung, the final episode in Wagner's epic, four-part Ring Cycle.  I had hoped to see the broadcast in the theater -- but with work demands I couldn't afford to devote seven hours of my Saturday to the opera alone.  So I stayed home and listened to the radio broadcast while dutifully drafting financing contracts for a major league hockey team. 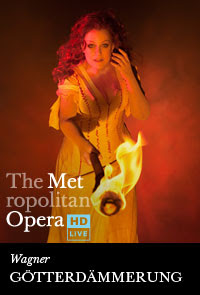 The opera is long and complicated and, frankly, exhausting.  I remember my first encounter with Wagner was seeing Tristan und Isolde in Londong in 2003 -- I characterized it as wading through five hours of mud in search of a few diamonds.  I've moved well beyond mud and can now appreciate the power and artistry of the work.  The singers and orchestra were magnificent throughout, and it was wonderful to hear them perform.  Chalk up another powerful performance that I wish I could have seen live.

We were down to the last five minutes of the opera.  The story was over -- Siegfried was dead, Brunnhilde had ridden her horse into the pyre, and Valhalla and all the gods had gone up in flames -- and I was already bustling about getting ready to leave to go downtown for another event.  I was in the closet changing clothes and listening distractedly while the closing refrains continued on the radio.  Then something happened:  The soft, ascending line of the melody, carried by the violins, split for a moment into a surprising harmony before resuming its quiet climb.  The effect, literally, was heart wrenching.  My chest constricted and I burst into tears.  There were no words, no video, nothing happening other than music that affected me in the most physical way I have ever experienced.  It was totally unexpected and left me rather shaken.  (Even my last experience with Wagner, which left me feeling like a different person, hadn't affected me quite like this.)

Then it was over -- the end of the world had come and gone, and Wagner had placed me gently on the other side.  I dried my tears, took a deep breath, and headed out into the night.

The heart may not have cockles, but it does have strings -- and Wagner knows how to pull them hard.
Posted by JJD at 10:21 PM

Email ThisBlogThis!Share to TwitterShare to FacebookShare to Pinterest
Labels: Opera