Holy cow, 25 hours of travel is SUCH a long time!  But I got where I needed to go (Hanoi!) with minimal hassle and stress (turns out the Koreans do air travel really well), and all those hours of travel did provide plenty of opportunities for amusement.

For example, this:  My friend Peggy has decided that this year's edition of the JJDSFT ("Jack Jason Davis Super Fun Trip") needs to include special challenges of the scavenger-hunt-and/or-reality-television variety. The first such challenge came this morning while I was going through security at Dulles: "Take a picture of someone who looks OUTRAGEOUSLY touristy. I'm talking fanny pack / socks with sandals, whatever." Normally in Washington, DC, this would be no problem, but apparently the crowd that flies to South Korea on a Thursday afternoon got the memo on fannypacks and socks with sandals. I thought for a minute that I was going to fail this challenge due to a lack of Iowans on the flight, but then I realized that Korean teenagers were even better than Iowans.  Score one point for JJD.

We had a little trouble getting out of Dulles due to severe weather in the Midwest and along the East Coast.  On my way out to the airport, I'd heard a report that all flights had been suspended, and so I was happy when we boarded on schedule.  We still had to sit for about an hour on the runway, which was tedious and added an extra hour to what was already going to be an interminable flight, but nobody really complained or got restless.  Probably because the pretty Korean flight attendants (so that's what flawless skin looks like!) kept bribing us into submission with orange juice and handfuls of peanuts.

Finally we got underway, and I settled in for the long haul.  I'd brought enough snacks to feed a village and what amounted to a small library of books written by snarky women bloggers; also The Great Gatsby, just in case I needed to show some highbrow cred.

After many hours of reading, I decided to see what movies were on offer.  Officially, I watched two movies:  Beautiful Creatures, which involved Emma Thompson, Jeremy Irons and Viola Davis slumming it in the Deep South with a bunch of witches; and Oz, the Great and the Powerful, which was unwatchably boring (well, unwatchable unless I'm trapped in a flying machine for 14 hours; apparently I'll watch anything then).  Unofficially, I watched about 10 hours of Bruce Willis and/or Jason Statham and/or Arnold Schwarzenegger and/or Jeremy Renner beating people up on the screen of the guy in front of me.

Then the lights went out and I dozed for a while, and from here on things get very fuzzy.  Somewhere over the North Pole I regained consciousness long enough to see Jesus Christ fighting orcs with Doctor Watson from Sherlock.  No, wait, this must be The Hobbit, so Watson must be Bilbo and Jesus that one hot dwarf who has the same beard and hair extensions.  Very weird.  But, I guess given the North Pole, it was either that or Santa Claus.  Then I went back under.

At long last we landed in Seoul.  The deplaning process was the smoothest I've ever experienced, as was the international transfer to connecting flight.  Which meant I had plenty of time to take a photo with local celebrities . . .

and grab a bowl of noodles "with special skewer dish".

And of course (thankfully!), waiting for me at the gate was Vanessa's familiar face.  She had flown in from Chicago and had arrived a little before me.  It was good to see her -- from here on we'll be partners in crime.  (Note to the NSA: If you're monitoring my blog, this is a figure of speech; we aren't actually going to commit crimes.) 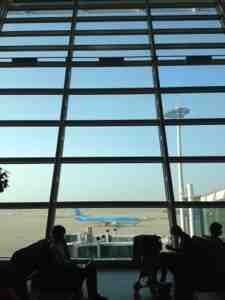 The next leg of the trip was a 4.5-hour flight to Hanoi.  Again uneventful, again a smooth and painless deplaning.  We grabbed our bags, sailed through immigration and customs, and into the capable hands of the driver who was waiting to take us to our hotel. 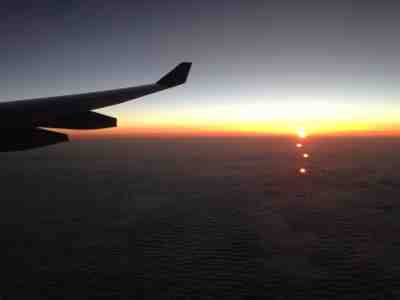 My impressions of Hanoi so far are primarily of darkness (there are so few city lights!) and smoke (it smells like a forest fire).  But the hotel is clean and very comfortable (oh, blessed air conditioning).  We've settled in, consumed delicious mango lassis (!!), and confirmed that the Internet is alive and well in Vietnam (Vanessa may also inadvertently have made a full-cost call to her husband in Chicago), and now it's time to get some sleep for tomorrow.
Posted by JJD at 2:03 PM

Hi Jason! I'm so glad you posted your blog on Facebook so I could see it :) Looks like this is going to be an exciting trip -- have fun! I look forward to reading your adventures. ~Ashley Nelson

PS - I'm pretty sure from the looks of it that the skewered food was odeng (pronounced a lot like "Oh, dang!" (which is fitting for me since it's not my favorite)). I would say the best description of it is a fish hot dog...or a mix between tofu and chicken skin :)

So far so good! Considering your track record with flying, I'd say you're off to an excellent start. Lady

How much do I love the don't let the mosquitos in sign? A whole lot. And we need to memo the NSA, if they are monitoring our blogs, which I am sure they are, we, as in our family, is a whole lotta crazy...I mean they could have just made the movie and called it, "My Big Fat Mormon" family...that is us.

And I'm sorry you won't be able to stand on the toilet....don't let that spoil your trip. :)

There is a reason for everything. I can only imagine the reason(s) for the "don't step on the toilet" sign. Lady