As in every other city we've visited in Vietnam, Saigon's streets are teeming with thousands of motorbikes zooming in what seems like (and often is) every direction.  This morning, we joined the throngs for a "city highlights" tour by motorbike.

We booked through XO Tours, and so this morning we were met at the hotel by two twenty-something girls in traditional Vietnamese dresses riding red motorbikes.  They handed us helmets and off we went! The girls ran a very slick operation.  They worked in a team of four: three drivers (our two, plus a driver for a random American guy who joined us) and one on-site guide.  The drivers would get us from place to place, and the on-site guide would be waiting for us in each place when we arrived.  She'd greet us and start giving us the explanation about whatever we were looking at while the two drivers parked the bikes.  By the time the drivers were done parking, the guide had finished her spiel, so she turned us back over to the drivers, who hung around with us while we took pictures (meanwhile, the guide got a head start to the next location).  This leap-frogging approach worked seamlessly and made for a very nice experience.

The whole tour lasted only three hours, so we didn't have time to cover the entire city.  But we did get to many of the highlights. The coolest thing in the post office was a little old man, who has been working as a translator there since the dawn of time.  He started out under the French regime, saw the Americans come and go, and then the rise of the new Communist government.  Throughout all of this, he just sits at his little desk with a pile of books and dictionaries, translating letters for people into Vietnamese or French or English.  He's a charming man and was kind enough to let us take a photo with him. The old post office is across the street from the Notre Dame Cathedral.  It was built between 1877 and 1891 with materials from France.  It's a Romanesque design, with relatively little ornamentation on the inside and outside.  Perfectly functional as a church, I'm sure, but also kind of boring from an architectural perspective.  A few of the original stained glass windows remain; the rest were destroyed in WWII and never restored. One interesting point about the cathedral:  Except for a small viewing area in the front, the cathedral is closed to the public -- which may strike you as odd, if you're in the habit of visiting catholic cathedrals, because they're generally always open to the public.  In Vietnam, though, space and privacy are hard to come by.  Families live in tiny apartments, often several generations under one little roof.  So folks are always looking for someplace to hang out that is not right in the middle of the family.  Parks are popular, so are cafes.  Just imagine if all of a sudden there was a giant new building with tons of places to sit in the cool out of the sun!  According to our guide, the cathedral would be overrun with people just hanging out.

Leaving the cathedral behind us, we went to catch up on some Vietnamese history.  First stop was the Reunification Palace.  This building was originally named Independence Palace and was built on the site of the French governor-general's residence.  On April 30, 1975, the Viet Cong tanks crashed through the gates, and it's now a basically empty government building that has been renamed to celebrate the unification of North and South Vietnam. 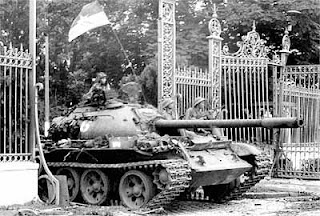 The next stop also related to the Vietnam/American war.  Recognize this? That's okay, I didn't either. Now how about this?

The guide explained that many people erroneously think that this image shows the evacuation of the American embassy.  In fact, this is the rooftop of a then-CIA building.  Many of the people on the ladder seeking to board the helicopter were Vietnamese support staff who feared being tortured/killed as collaborators once the VC arrived.  Sadly, not everyone could fit in the helicopter.  (As a sidenote, the guide explained that the building will likely be razed in the next few years to make way for a fancy hotel.  So what a great moment to see a piece of history before it's gone.)

After learning that bit of history, we jumped back on the motorbikes and rode across town to the Jade Emperor Pagoda.  Here's a video of our ride through town:

The Jade Emperor Pagoda was built in 1909 by a Cantonese congregation to worship the Jade Emperor, who is the supreme Taoist god.  It's still dedicated to the Jade Emperor, but most of the worshipers are Buddhist (and I'm still a little fuzzy on how Buddhism and Taoism relate). The atmosphere inside the pagoda was wonderfully mystical and mysterious.  Thick clouds of incense smoke swirled around fantastically carved panels and ornately decorated statues, and sunlight filtered in from above. As we progressed through the pagoda, our guide explained the roles of the different gods and why people pray to them.  First, there's the Jade Emperor who guards the gates to heaven.  You want to be friends with him so that he lets you in.  But what if you don't get in?  Well, in the next room, there's a statue of the god of hell.  It's a good idea to pray to him, too, so that he's nice to you if you end up in hell.  (And believe me, based on the graphic, Dante-worthy wood carvings on the walls, you definitely want to end up in the "hard labor" category, and not in the "beheaded and dismembered" category.)  Of course, even if the hell god is nice to you, you're still in hell, which isn't all that great a place.  So in the next room you can pray to the god of getting out of hell.  And finally, next to that statue, is the statue of the god who grants long life.  So I guess if you're smart, you'll just keep that one really happy and live forever -- that way you never have to worry about all the other gods.

From the pagoda, we rode to one of the larger local markets in the city (not the tourist-focused Binh Tay market).  We wandered through the stalls, soaking up the exotic smells and colors.  We ended up at one of the food stalls, where a woman served us little pots of fresh yogurt (yum!) and bowls of flan with coffee and ice (meh). The last stop on the tour was the monument honoring the monk who immolated himself in 1963 to protest the South Vietnamese government's increasingly restrictive policies regarding the practice of religion (specifically, Buddhism) in Vietnam.  In many ways, his act of defiance was the turning point in a series of events that led to the fall of the South Vietnamese government (and many years of war).  He is regarded by Buddhists as nigh unto a reincarnation of the Buddha himself.  Unlike other monuments erected by the Communist state (which tend to be heavy handed and kitschy), this one is impressive and moving. And in case you aren't familiar with the iconic picture of the deed (on which this bas relief is based), this is it: 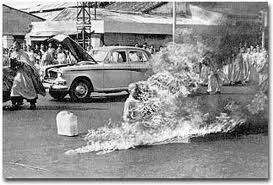 And here's the streetcorner where it all happened.  Forty years later, life goes on. Like I said, this was the last stop on the tour.  From the monument we headed back to the hotel, bid farewell to our guide and drivers, and opened the guidebook to see where we wanted to go next . . . .

The post office by Eiffel, Notre Dame Jr, why, it's almost like being in Paris. ;) I saw those black & white images first hand and remember them vividly... Interesting as always. (I find I am pondering on the avocado milkshake) Lady