The key to overcoming jet lag is to force yourself to operate on local time as soon as you arrive.  So instead of going to bed at the unheard-of hour of 8:30pm (as my body very much wants to do), I'll post a few pictures from today.

We arrived safe and sound in Paris around 10:30 this morning.  The trip went incredibly smoothly -- we sailed through security at Dulles, enjoyed a comfortable and not over-crowded transatlantic flight, landed 40 minutes early, and then shuffled through customs in record time.  It's the first time I've been at Charles de Gaulle airport without having my will to live sucked from my body.

I attribute the smoothness of our trip to our using up our quota of bad travel energy before we ever left my apartment.  As you know, I had a concert yesterday.  The plan was to leave as soon as the concert was over, grab some dinner, and then have a leisurely drive to the airport.  Instead, our director insisted on doing an encore, then a group photo.  On top of that, in a fit of misguided helpfulness, I offered to give an old lady a ride home, not thinking that she would walk .003 miles per hour to the car, complaining the whole way, nor that we would get stuck in a bumper-to-bumper Sunday-night traffic jam on the way to her house.  These choral shenanigans ended up costing us a full hour -- so we ate dinner as quickly as we could (eating cheesy potatoes with ham and chocolate cake in a most civilized manner despite our inner turmoil, thereby proving our British ancestry) and headed out the door despairing of a tranquil flight.  Thankfully, that was the end of our travails.

And now we're here!  We've got a room at the Grand Hotel des Balcons in the Saint Germain neighborhood, right next to the Odeon Theatre.  The room is on the fifth floor (with an elevator that fits 1.5 people at a time) -- it's tiny, but clean and definitely sufficient for our needs. 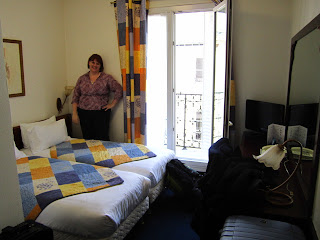 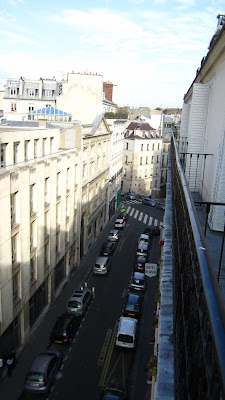 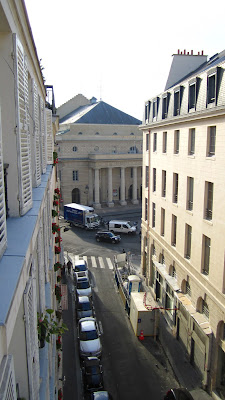 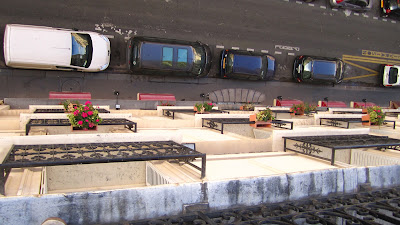 We spent the rest of the day wandering around the city.  Well, actually we pretended to wander around the city, but in fact we had four things that needed to be done.
I'm happy to report that we did all of those things.  I'm most pleased about the theatre tickets:  The Comedie Francaise's website has shown everything as being sold out for the past month, so we were thrilled that the box office was able to sell us two seats to see Moliere's L'Ecole des femmes on Wednesday night.  (I admit also to being very pleased about the lint roller -- my navy blue peacoat had been accumulating lint at an alarming rate.)

It's such a shift to go from the rough and tumble adventure of Peru to the lovely civilization of Paris.  It feels so familiar and comfortable -- and it's wonderful to know that I can settle in for a week, with no 18-hour bus-rides or overnight ferry trips.  It's great to speak French again, and I love seeing well-dressed people (it's so nice to see people who, in general, care about how they look and dress like grown-ups, instead of dressing like 45-year-old kids.)  It's also fun to feel the pace of the city.  There's an energy here, but it's nothing like the intense energy of New York.  I'd forgotten that, and now that I've lived in New York, I think that Paris feels much less grand and intimidating as a result -- much more tranquil and refined.

I suspect that the ease of life in Paris may pose a risk of boring blog posts.  It certainly won't be as easy to find good fodder as it is in third world countries, but I'll do my best to keep things interesting -- just give me until tomorrow, at least, when I've had a chance to kick the jet lag.  I'll post some pictures now, and then it's off to bed.  Don't forget to check Amanda's blog, too, as she's gotten some good pictures as well.
Posted by JJD at 3:30 PM