A Moveable Feast (or Thanksgiving in Paris)

Ernest Hemingway called Paris a moveable feast -- and on this American day of feasting, that's exactly what it was for me (only Paris wasn't actually moving, it was I who moved from feast to feast...).

We started out with breakfast chez Paul.  We had missed breakfast the past few days, in part due to our schedule, in part due to our overestimating the ease of finding good boulangeries along whatever path we were taking (turns out they aren't that easy to find in St. Germain).  We also realized that we hadn't taken any time to sit and read and/or people-watch in a cafe.  So this morning we decided to make up for lost time and kill two birds with one stone:  We headed to Paul and got a handful of pastries and some hot chocolate and installed ourselves on the chairs outside. 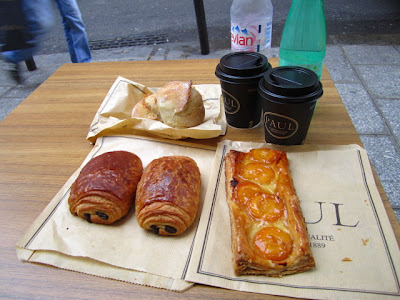 While we digested all the butter and sugar our systems could handle (yum!), Amanda pulled out her Kindle and began to read.  While she did that, I talked to her about the play we saw last night and where we were going to eat for the rest of the day.  Between her iPhone and my Michelin guide (and despite Amanda's great sadness at not being left alone to read), pretty soon the rest of our Thanksgiving meals were planned -- because, you see, breakfast was just the beginning!

After visiting the Sainte Chapelle, Notre Dame (sorry, Puritans!) and the deportation memorial, we had lunch at La Regalade St. Honoré.  This little gem is on the Rue St. Honoré, not far from the Louvre, and was recommended by the Michelin guide.  We were greeted by an elegant hostess in a black and pink sheath dress and a severe up-do who spirited away our coats and seated us at the last open table in the tiny dining room.  Once we were packed in among those happy diners, our waitress plunked down a terrine de campagne, basket of bread and jar of cornichons.  Amanda and I took one taste of the terrine and the cornichons and knew our lives were about to get much, much better!  We basically giggled our way through lunch, it was SOO delicious -- a revelation after the mediocre food we'd been eating so far on the trip. 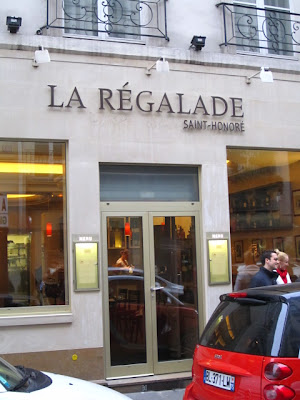 ﻿After lunch we headed into the Louvre to work off the calories and look at sculptures of Greeks who clearly never had to worry about calories (but who also had never been to Paris and therefore should be pitied...) -- but only for a couple of hours, because dinner was next and, having decided not to make any reservations, we knew we needed to get to our chosen places before the dinner rush in hopes of getting in.  Turns out, our first choice (a French-Asian fusion place) was totally booked, and our second choice (a Japanese restaurant) didn't open for another hour.  So we made a reservation for an hour from then, walked around for a while, and came back for another incredible meal.
The place was Azabu, located on yet another tiny street in the St. Germain neighborhood (not far from our hotel), and was also recommended in the Michelin guide.  The dining room was even smaller than La Régalade (we counted 15 seats) and very simple.  The staff was very attentive throughout the meal, and the menu was easy to navigate (unlike so many Japanese restaurants in America, which can overwhelm you with endless sushi charts).  Just as the Michelin guide had promised, the food was delicious, obviously a result of high quality ingredients.  Everything we ate was simple and fresh and, oh! so pretty!  (The eggplant that Amanda ordered, in particular, was astonishingly good.) 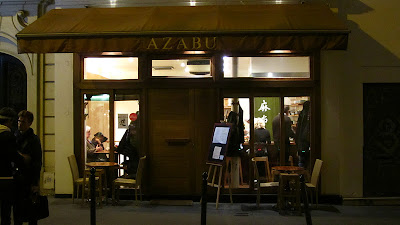 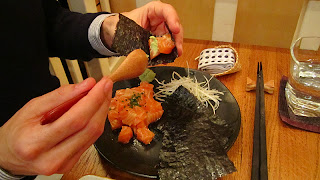 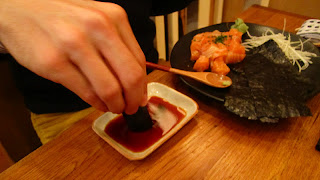 This wasn't a traditional Thanksgiving dinner (or, should I say, Thanksgiving breakfast-lunch-dinner), although I will point out that I did have sweet potatoes and green beans.  But it was delicious, and I'm very thankful for all the blessings that have made it possible to be here.  Even so, it wasn't quite the same without my family -- so let's see if we can't figure out how to get the family to Paris...
Posted by JJD at 6:18 PM

A very happy Thanksgiving to you!!!