Transatlantic flights have never deterred me from going to a performance I wanted to see:  Last year I saw Cosi Fan Tutti after getting off the plane in Vienna.  In 2009, I saw a Greek folk-singer perform at the Acropolis in Athens.  Today, I saw Equivocation at the Arena Stage after a 10-hour flight from Paris.

I'd never heard of the play before, but a friend of mine told me her uncle had seen the original production at the Oregon Shakespeare Festival twice back in 2009 and had been raving about it ever since.  So when we learned that the same production (original cast and all) was coming to Arena Stage, we made sure to get tickets.

The uncle was right:  This play is wonderful!  The writing, directing and acting were all so well done and polished that I was thoroughly engrossed for the entire 3-hour running time (despite having just arrived from Europe).  It deals with a fictionalized Shakespeare and his troupe who have been commissioned by King James to write a play that would serve as the official version of the Gunpowder Plot.  The actual play (not the play within the play) therefore deals with fascinating and knotty questions about politics and religion, truth and lies, and the relationship of art to all of that.  The play takes its title from the doctrine of "equivocation," which Catholic priests developed in the face of persecution by the Church of England and the King.  As one of the characters put it, "equivocation" is "attempting to tell the truth in difficult times."  The instruction he gives when pressed is:  "Don't answer the question they're asking. If a dishonest man has formed the question, there will be no honest answer. Answer the question beneath the question."  In other words, it's a way to reconcile the moral imperative of honesty with the temporal interest of not getting one's head cut off.

To add to the enjoyment, the play contains so many references to the real Shakespeare and his various works that any true Shakespeare-lover will feel like a kid in a candy shop (and then will want to go home and reread the collected works to fill in all the missed references). 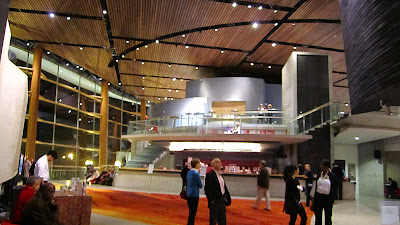 (Btw, Amanda, in kind of too bad that you managed to catch your connecting flight -- you would LOVE this play.  The program notes mentioned that it's scheduled to go to Denver, though, so be sure to check that out.)
Posted by JJD at 12:01 AM