We quickly settled into the routine of life in a Berber camp.  It was a simple but noble existence, moving smoothly from sand-boarding to playing dress-up to eating delicious tagines by candlelight to singing round the table and asking each other riddles until we fell asleep.

Sandboarding
(Keep in mind that I've never snowboarded in my life.) 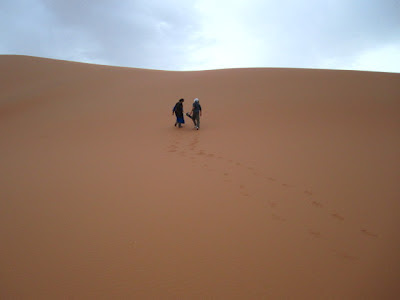 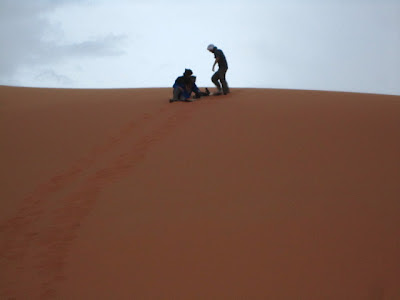 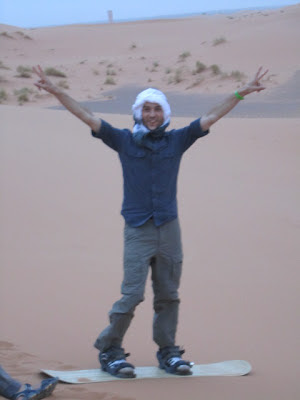 ﻿
Check out these vids for some rad footage of me shredding that dune.  It's classic Warren Miller material.

Dress-up
Said has suspected from day one that I might actually be Arab.  He kept asking where my parents are from ("Are both of them American?") until he finally came out and said that I look like I could be an Arabic guy from Casablanca or Rabat (the two big, predominantly Arab population centers in Morocco).  The head scarf furthered that resemblance, and Said thought it would be fun to complete the effect by having me don his desert garb.  He said I could call myself Mohammed. 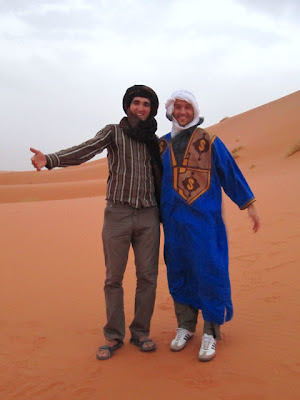 Dinner
After sunset our three Berbers disappeared into their tent -- purportedly to make dinner -- for a very long time.  They were gone so long, in fact, that I started to wonder if there had been some sort of miscommunication in which we'd inadvertently declared ourselves not hungry.  A steady stream of voices and laughter emanated from the tent; clearly they were having a great time in there while we sat in the dark and felt hungry.  But all that waiting paid off -- they brought out heaping bowls of delicious chicken tagine with vegetables and rice.  It was a simple dish, just the meat and vegetables with little additional seasoning, but the ingredients were fresh and well-cooked, and oh so satisfying. 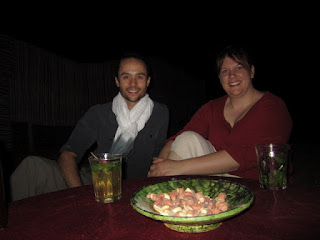 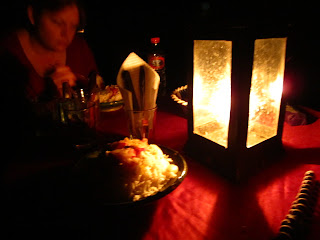 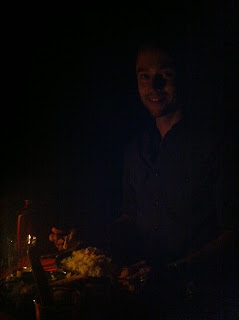 Song and Dance
After dinner Said and the two other Berbers (whose names I never learned -- they stand out in my mind for their remarkably pungent personal odors and proclivity for repeating the word "Africa" at regular intervals with the expectation that those who hear respond with "Wakaka") brought out drums and hand cymbals and treated us to some fun and entertaining African songs.  Most of them weren't Moroccan -- I think the majority were from Senegal.  A couple of times they paused and invited us to share some American music.  I thought of several Boy Scout camp songs, but they all required some sort of call and response -- Amanda didn't know them and it would have taken too long to teach the Berbers the words.  When we saw that we weren't going to be able to avoid contributing something, we settled on one round of "Row Row Row Your Boat" -- which was such a complete flop that we weren't asked to sing again (although we were expected to try our hand at the drums and at dancing).


Riddles in the Dark
The music died down and the dynamic around the candlelight turned to conversation.  The unnamed Berbers wandered off pretty quickly with a farewell "Africa! Wakaka!" (chuckle, chuckle), leaving just Said, Amanda and me.  Said attempted to tell some jokes:

The thing about jokes is they depend so much on timing, witty language, and shared cultural reference points in order to succeed.  Lacking those, we found ourselves migrating toward riddles -- with much greater success.  Said had a few of his own, including one that I hadn't heard before:

I knew no riddles other than those from The Hobbit when Bilbo Baggins first meets Gollum in the cave -- and since Said had never read The Hobbit, those riddles served the purpose well:

A box without hinges, key or lid, yet inside a golden treasure is hid.
[Answer: An egg]

There was something extremely satisfying about sitting in the dark in the middle of the desert exchanging riddles with a Berber kid whose parents had been nomads and who had grown up so far from the world and circumstances I had known.  The fact that we were able to correctly guess some of the riddles spoke to the universality of things like eggs and pregnant women, which everyone encounters regardless of language, education or culture.
Posted by JJD at 9:00 PM