Stranded! (for a minute)

We're about twenty minutes into another long bus ride -- this time from a town called Chivay, in the Colca valley, back to Arequipa. It'll be about 3.5 hours, assuming we have no more delays (we've already had two: first because an American guy in our bus missed the rendez-vous, so we had to hunt through town to find him; second, because --

Dang it! I put the second delay in the past tense too soon. I was about to write "because an American girl on the bus left her phone back in town and made the driver stop and call another driver to have him go pick it up." All of that is still true, but now I have to add the following: "Unfortunately the girl couldn't give specific enough instructions, so our driver decided to turn back to find the phone, leaving all the rest of us stranded on the side of the road in some of the mountains of Peru."

That's right: Amanda and me and our eight fellow travelers are sitting on the side of the road like so many refugees. Watching a storm blow darkly across the valley, right in our direction. (Which makes me wonder: If it turns into a snow storm and we don't get rescued, could I survive by sleelping inside a dead llama, like Luke Skywalker did with that Ton-Ton? I'd rather do that than pull a Donner Party and eat the Japanese lady.) 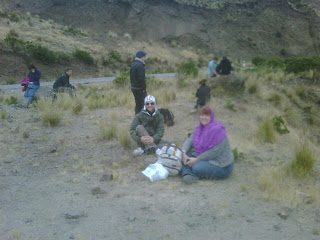 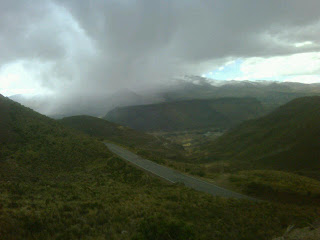 But I should back up a bit. Here's the short version of events (which eventually will get their own separate posts) since we arrived in Arequipa: First we kept (but later broke) the Sabbath with local church members. Then we joined a group of travelers on a two-day guided excursion back into the high Andes (and believe me, they are very high) so that we could, among other things, spend another freezing cold night in a hotel without heat or hot water and then get up at 4:30am to see some Andean condors fly around in the Colca Canyon, which is the third deepest canyon in the world.

After seeing the birds and having lunch (and finding the American who missed the rendez-vous) we piled into the van and began our long drive back to Arequipa. That's when I started typing this blog entry and, a few minutes later, found myself sitting on the side of the road, with our only means of transport speeding away in the wrong direction.

The reason for our abandonment, apparently, is that the van's speeding will be speedier if we are not all inside t weighing it down. We'll see about that.

[Montage signifying the passage of time: We pose for refugee pictures; our guide tells us more about which shrubs have good resin for making bonfires; the storm comes closer and the first drops start to fall causing me to pull up the hood on my raincoat, Amanda to pull out her polka-dotted umbrella, and the Belgian couple to seek shelter under a rock... Then, lo and behold, our bus rounds the bend -- there is cheering, weeping, slow motion embraces and promises to keep in touch. The music swells...]

Okay, that last bit may not have happened. But our bus did come back (more quickly than I'd expected) and now we're merrily on our way again. I guess I won't have to sleep inside a llama today after all.

(Oh, and in case you were wondering, the girl did find her phone.)
Posted by JJD at 9:58 PM

I'd have thought you'd have been more prepared for, and looking forward to, yet another refugee experience. After all, you just left that situation in your very apartment (and this is becoming a recurring theme). This being much more of an authentic experience will probably cause you to completely rethink your decor at home and embrace the entire style with reckless abandon. No wait, you, reckless abandon?? Well, you'll have to think about it first!

However, I was really looking forward to the whole killing and gutting of the llama story...