In 2007 I decided to take a job in Washington, DC, rather than stay in New York City.  When I told other people what I'd decided, the general response was bafflement.  Beyond the categorical bewilderment that New Yorkers feel at the concept of living anywhere other than the center of the universe (nowhere is more convinced -- and convincing -- about it's place in the cosmos than New York), and the particular disdain with which they view DC ("it's just a giant SUBURB!"), those who knew me best legitimately wondered why I, specifically, would want to leave New York.  I loved New York:  the food, the opera, the theatre, the art galleries, the energy, the buildings, the style, the shopping, the yoga, the New York Public Library, the center-of-the-universeness, the fact that you could walk out your door at any hour of the day and get a cab.  I had friends there from nearly every stage of my life (high school, mission, college, internships, law school).  And my law firm had a great office in one of the coolest new skyscrapers in town.  It's the only place in the United States where I would wake up every morning and think, Boy, do I love it here!  (I felt that way when I lived in France, too.)

So why did I leave New York?  There were a number of reasons, both personal and job-related, but the one that was most easily captured in a word was this:  Gardens.  I wanted a garden, and I knew that I would never have one if I stayed in Manhattan.  In DC, I wouldn't have everything that I loved about New York, but I'd have a lot of it (the theatre scene is surprisingly good, and there are great restaurants if you know where to look), and for what I couldn't get, New York would only be four hours away.  And in DC I knew that my chances of someday being able to afford a little plot of ground would be much, much higher.

So I moved to DC and, ironically, spent the past three years living in a high-rise apartment with no garden.  It was a great apartment, and I did grow some great giant ferns in the sunroom, but I couldn't grow plants that needed to be outside, and I couldn't really dig in and get my hands dirty without getting dirt everywhere in my apartment, too.

This spring I moved into a new apartment.  It, too, is a high-rise and it doesn't have the wonderful sunroom that my other place did, but it does have a balcony.  Which means I can grow plants outside.

Potting some plants had been part of the plan since I'd moved in -- but other activities pushed it into low priority.  First I had to finish unpacking the inside of my apartment (so I could get all the boxes off the balcony) while balancing a demanding work schedule and hosting duties while Amanda was in town.  Then, of course, I was in Peru for two weeks (and there's no point in planting right before leaving, when there'd be no one to water while I was gone).

By the time we visited Monticello last Saturday, those other concerns had been resolved and Jefferson's extensive plantings had started my gardner's juices flowing.  Then I found a container garden "recipe book" in the visitors' center gift shop and got really excited. 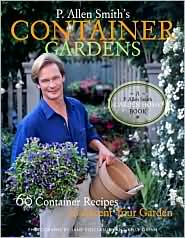 I spent the rest of the weekend and most of last week reading through the recipes in the book, marking the ones that I liked (almost all of them) and trying to figure out which ones would fit into my pots and be suited to the light and heat of my balcony (only a handful).

Naturally, I didn't use a single recipe.  When I got to the nursery, three things happened:

First, I felt completely overwhelmed.  I had spent so much time reading about the plant species (sunlight preferences, watering needs, seasonal blooming cycles), design principles (P. Allen Smith had no fewer than 11 in his book), and technical issues (pot material, soil types, drainage tricks), that I had a headful of theory and facts, and not a clue about how to go about sticking plants into pots.

Second, I was "rescued" by helpful and friendly garden-center employees who promptly crushed all dreams of growing hibiscus (sniff), but then suggested a number of other plants that I would likely have more success with.  They also confirmed my suspicion that 11 design principles is way too many, and that the only ones that really matter are the following:  Put in something tall and spiky, something bushy and flowery, and something that trails.  Most of all, however, they reminded me that planting is not rocket scence.  Aside from some general rules about the amount of light a plant needs, you can pretty much do whatever you want -- especially if all you're doing is seasonal containers.

Third, having finished my tour of the nursery with my gardening mentors, I spent the rest of the afternoon assembling and potting some "recipes" of my own (which turned out pretty well, if I do say so myself).  It's a far cry from the real garden I would someday like to have, but it feels good to have plants growing outside.  My balcony -- and, really, my entire living room -- feels totally transformed. 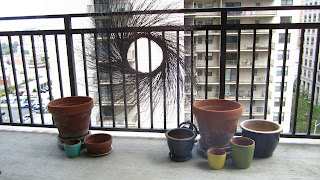 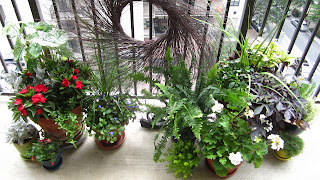 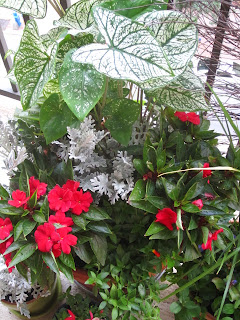 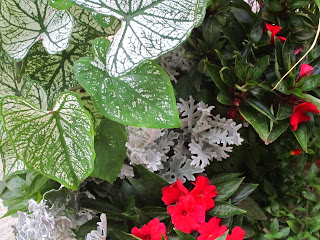 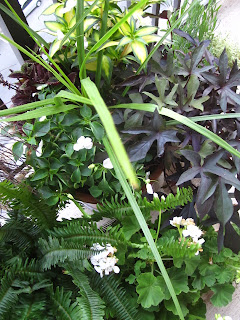 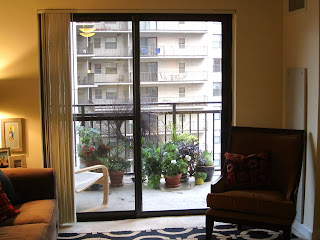 Very cool! I think they look fabulous! So, for all the time and woe, they turned out really well! I'll tell you this, though... you HAVE to check out vertical gardening!!! I think you would love it and could be really successful where you live!