Oh man, what a difference sleep makes!  After going to bed last night at the unheard of hour of 11:00pm, we got a full nine hours of sleep, which is basically unheard of on our vacations -- we tend to average somewhere closer to 6 hours per night due to awesomeness.  Only sometimes all that awesomeness takes its toll, and we'd gotten to the point yesterday where we were dragging our sleepy selves around the sights without really taking it all in.  So early to bed, lots of sleep, and BAM! we're rebooted and ready to go.  Temples?  Bring 'em on!

Over breakfast we plotted a north-south itinerary:  we'd start with the most southerly sight we wanted to see and then work our way north toward the hotel, stopping at whatever interested us along the way.  The criteria for "interesting" were pretty subjective; there are so many important historical and cultural sights in Kyoto that you have to narrow down the list on the basis of things like "didn't burn down within the last century" and "might not look exactly like every other temple we've seen so far."

First on the list:  Fushimi Inari-taishi, a shrine complex that was originally dedicated to the gods of rice and sake in the 8th Century and later expanded to cover the gods of business.  The most striking aspect of the complex are the thousands of red/orange torii (gates) that line several kilometers of walking paths.  Strolling through them is surreal, like something you'd find in an Alice in Wonderland adventure.  (Although their website doesn't say for sure, it's hard not to believe that this shrine inspired Christo and Jeanne-Claude's 2005 art installation The Gates in Central Park.) 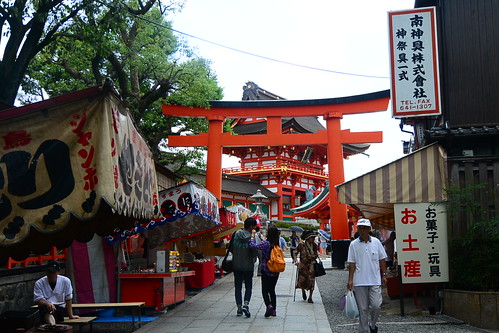 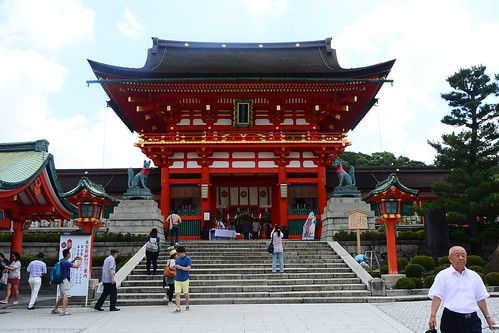 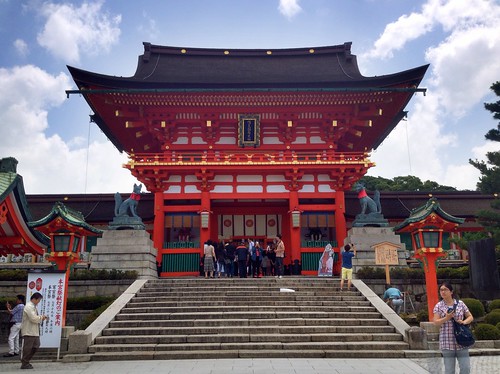 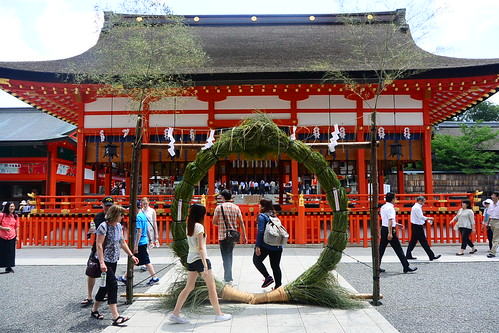 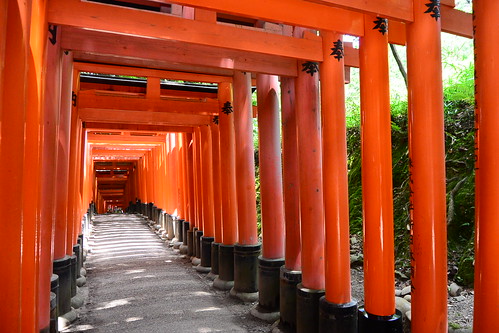 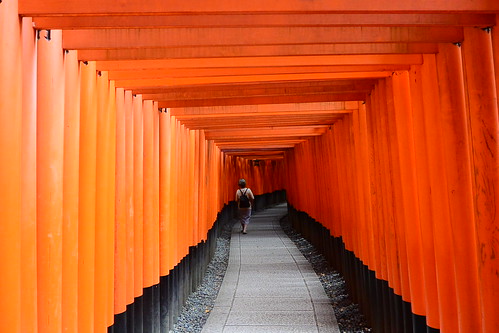 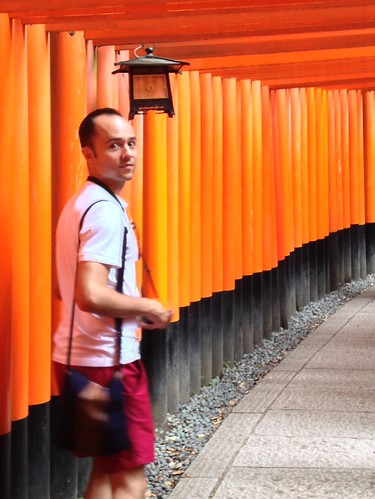 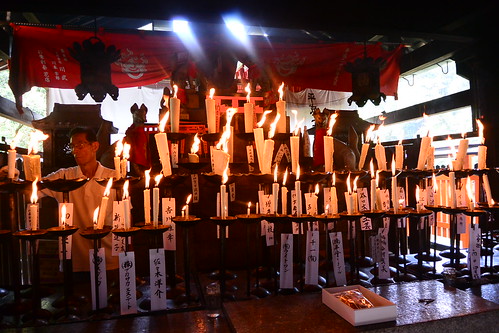 Leaving the orange-colored gates behind, we went north, stopping for lunch at a place that offered rice bowls. 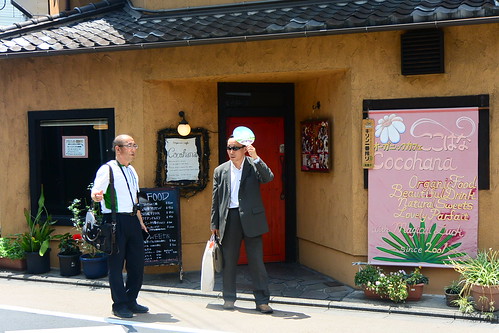 The the taco bowl restaurant was on the way to Tofoku-ji, a temple complex founded in 1236 and featuring the oldest main gate in Japan and some gardens that appeared in pictures all around Kyoto and in the guidebooks.  It was listed as a "don't miss" in the guidebook.  Our reaction wasn't quite so enthusiastic:  the large buildings were closed to visitors, and the mossy gardens had sort of dried out in the summer sun.  But we could see how it would be spectacular in the autumn when the leaves turn. 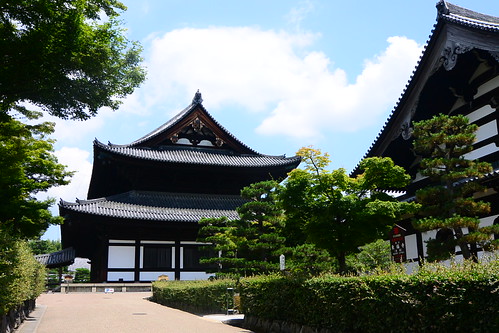 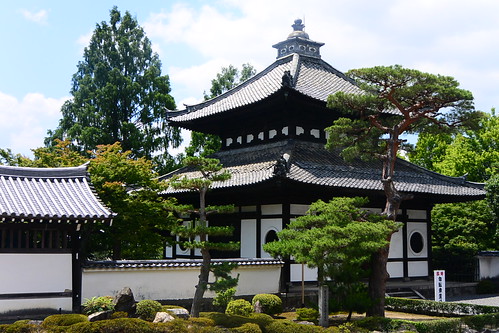 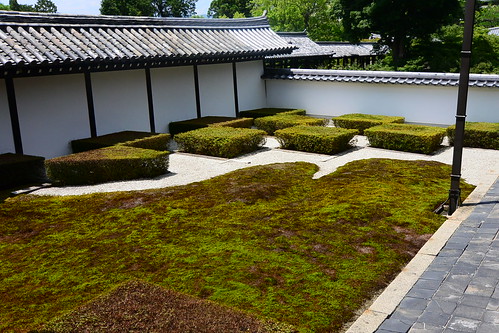 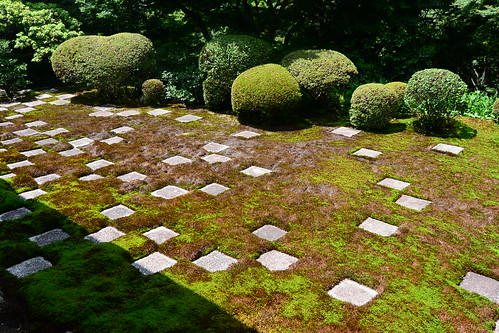 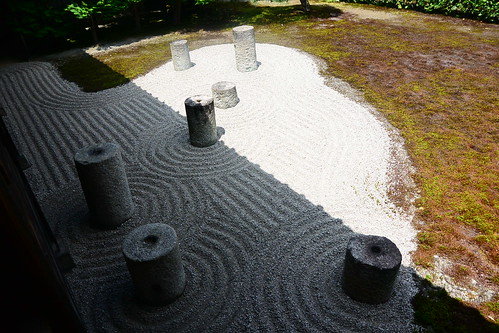 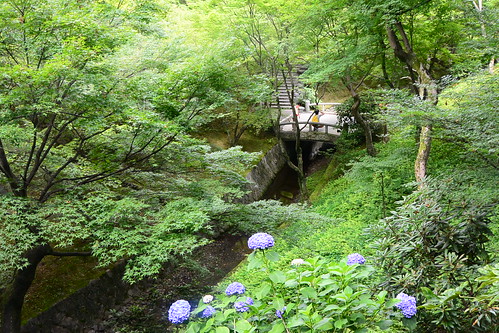 Leaving the gardens of Tofoku-ji behind us, we made our way to Kiyomizu-dera.  This temple complex was founded in 798, and the buildings date from 1633.  Unlike the other places, which had been relatively tranquil, this temple complex was packed with tourists.  Much of it was also under construction, so the grandeur of the place was hard to appreciate.  We walked around and then left pretty quickly. 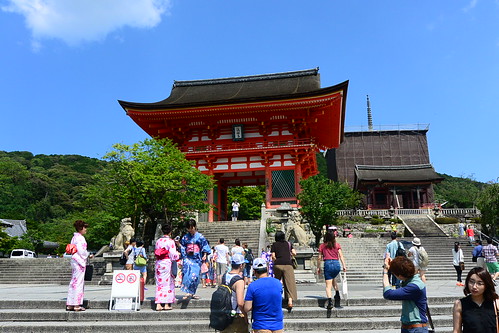 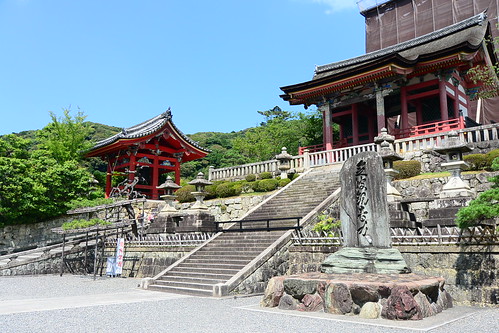 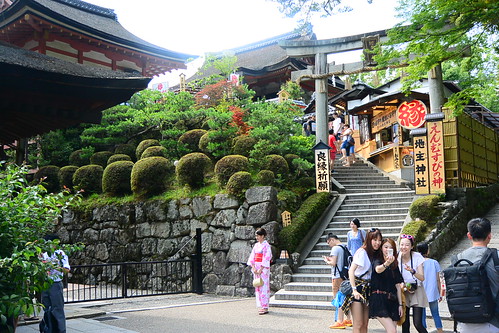 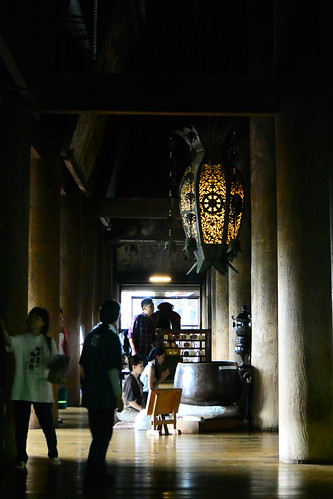 By this point, we had walked several miles on a warm day.  We weren't hungry for a meal yet, but it was time for a snack.  We decided to try to find mochi, the wonderful glutinous rice sweets that we had enjoyed in Tokyo.  We weren't successful, but we did find a few other tasty treats:


Next on our list was the temple complex of Chion-in.  Founded in 1234, this temple complex is the headquarters of one of the most popular sects of Buddhism in Japan.  We were curious to see its nightingale floor and giant bell (the largest in Japan), but -- sadly -- most of the main buildings were closed for construction, and the gardens were closed because it was getting late in the day. 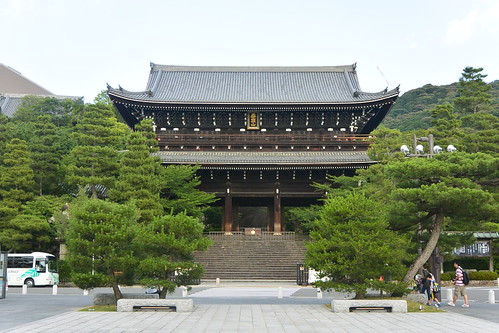 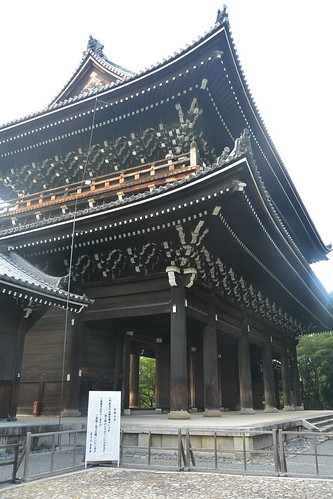 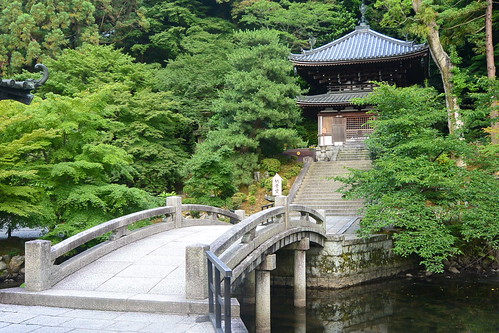 Fortunately for our now-tired feet, Chion-in was only a short distance from our hotel.  So we left the temple grounds and walked back through the neighborhoods, enjoying glimpses of other temples as we went and relishing the fragrance of gardenia hedges (at least, I relished them -- Amanda seemed unimpressed). 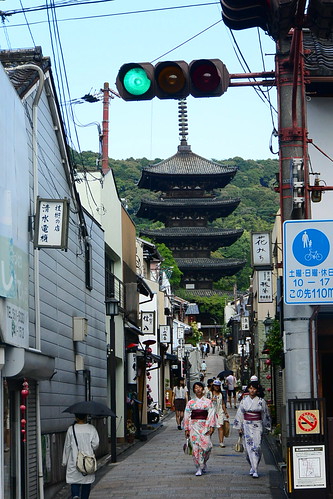 By the time we arrived at the hotel, we had walked about 10 miles (according to Amanda's pedometer) and had just enough time to take a short snooze and change for dinner and a performance.  More on that next!
Posted by JJD at 9:06 PM