Okay, so I move to Seattle in the springtime when it's raining all the time and I'm criticized for using an umbrella.  Because why use a device that was invented -- and used by the rest of the civilized world -- to stay dry when you can just be damp all the time?  "Don't worry," said everyone, "you'll get used to it, and the summers are great!"

Now it's summer and everyone's walking around congratulating themselves and saying, "See? What did we tell you?  Isn't this the best thing ever?"  And I respond politely and say something like, "Well, it's certainly better than the rain!" or "I'm loving this sunshine!" but you know what I'm really thinking deep down inside?  NO, THIS IS NOT THE BEST THING EVER!  It's the middle of July and the high temperatures still barely break 80 degrees during the day, and even when they do, the warmth is only in the sun: sit for five minutes in the shade and you'll get hypothermia if you aren't wearing a sweatshirt.

And then -- THEN! -- after spending your so-called "beautiful summer day" wondering if you're ever going to feel warm again in this life, you go home and discover that your apartment is 30 degrees warmer than it is outside!  Don't believe me?  Consider my current thermostat reading: 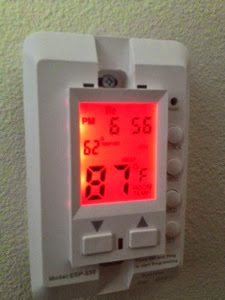 That's right -- it's 87 degrees in my apartment right now on a night when it will drop to 57 degrees outside.  And no, because of the stupid design of the windows, which generate zero circulation, the apartment won't get cooler as the night progresses: the temperature in this apartment hasn't fallen below 86 degrees since I got home from Japan almost two weeks ago.  I'm not even exaggerating for the blog.  I spend all day long freezing at work, and then I come home and spend all night sweating in bed unable to sleep.

Which is total B.S. because I've wanted air conditioning every day for the last two weeks, and we've still got a lot of summer left!  So either people don't know how to count, or they think that wanting air conditioning continuously throughout the entire summer counts as wanting it only once.  And obviously I'm not the only one who thinks it's hot enough for air conditioning!  I went to Target today to buy some fans and discovered that their entire inventory is sold out and has been for days.  Why?  Because all the Seattleites who pretend that you don't need air conditioning here actually want air conditioning and are just as hot and sweaty as I am!  For crying out loud!

Seriously, Seattle, why do you hate modern technology and advanced civilization so much?  We can get the most pretentious coffee in the world and outdoor gear that is engineered to within an inch of your life, but we can't use freaking umbrellas or air conditioning or windows that open wide enough to ventilate?  This is no way to live.

Email ThisBlogThis!Share to TwitterShare to FacebookShare to Pinterest
Labels: Seattle, Trials and Tribulations

Try lining your bed with frozen camping ice packets - blue ice. They'll cool your bed before you get in. Also wrap them in a pillowcase or towel and keep them next to you as you sleep. Kind of strange but very effective. - Susan

Well...every place has it's own quirks and ways of doing things. I say get a FABULOUSLY different umbrella and take it with you everywhere! Have you got a Home Depot or can you order a fan online? Memo to you: your house must have AC!Good luck!!

Get a window unit for your bedroom, it's worth the $100. You can resell it on craigslist when you move... or buy one there

I second Vanessa and a window a/c.

And am in 110% agreement with you on a/c for every house. We also have no a/c "because you don't need it at 7500 feet of elevation". Well yes, in June when it's 90 degrees everywhere. I know I'm a whimp saying that having grown up in Phoenix too. But I think you get to a point in your life when you just don't want to "deal" with certain things.