Because Amanda and I apparently can't go more than 24 hours without eating delicious food, and to avoid going into withdrawal after two weeks of such good food in Japan and Korea, we spent the bulk of this afternoon on a gourmet food tour through downtown Seattle.  Run by Savor Seattle, this "walking culinary tour" is one of several descendants of the company's original tour of the famous Pike Place Market.  According to Tripadvisor, these tours are the No. 1 thing to do in Seattle.


We met our guide, Nick, and fellow gourmands (all from Texas except for one North Carolinian) at the Yellow Leaf Cupcake Co., which is just down the street from where I live (I've actually walked past the shop many times, only I never thought to stop).  After Nick had finished his prefatory tour-guide remarks (stay together, have fun), the shop's owner came out with several trays of tiny cupcakes, which we tasted while he gave us background on the shop.


The cupcakes were very good, most notably because of the frosting.  The owner explained that most cupcake shops use American butter frosting (a confection of butter and sugar, very easy and inexpensive to make), but Yellow Leaf uses Italian butter frosting.  This type of frosting is egg-white-based and is very tricky to make.  The reason for the difference?  If you're going to pay for a "gourmet" cupcake, you should get something that you can't (or aren't likely to) make on your own.

Next place on the list:  Serious Pie, for some of Tom Douglas's famous pizza.  Tom Douglas is Seattle's resident super-star chef, with a national profile and lots of restaurants around town.


I've eaten at other Tom Douglas restaurants but had avoided the pizza shop (there's one across the street from my office) because of its reputation for extravagant pricing, but this was sufficiently good that I'm now rethinking that policy.  I particularly liked the simple, fresh flavors of the margarita pizza.

Moving on, we found ourselves near the north end of Pike Place Market at a place called Cutter's Crabhouse. 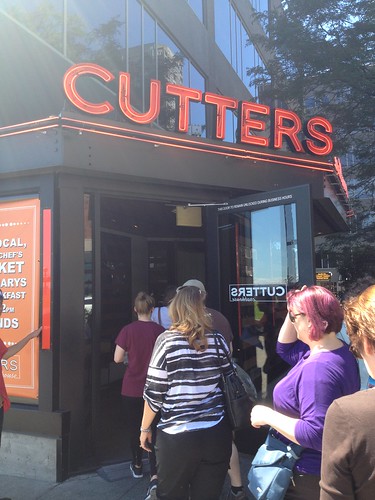 I never would have come here on my own, because it looks like one of the neighborhood's myriad tourist-trap restaurants that serve over-priced, mediocre food.  Apparently that's what this restaurant used to be until the current chef took over and started churning out some top-notch new dishes, including giant prawn stuffed with Dungeness crab. 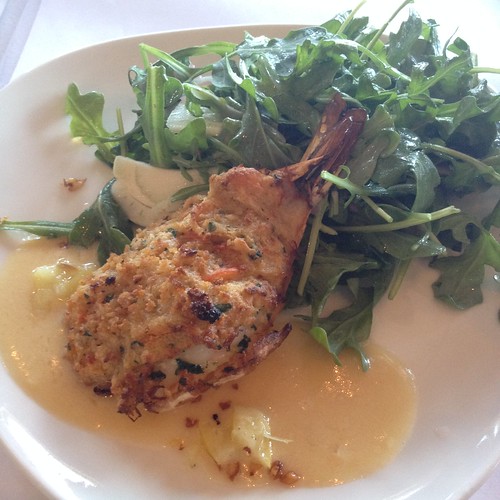 After enjoying the crab and prawns, we walked back out into the sunshine and into the boisterousness that is Pike Place Market.  By this time everyone but me was complaining of the heat and humidity ("what a scorcher!" was a favorite phrase).  I, on the other hand, was loving the weather and only wished it were warmer.  I mean, a sunny day in the high 70s with a light breeze is very near perfect -- almost summer; definitely not a scorcher. 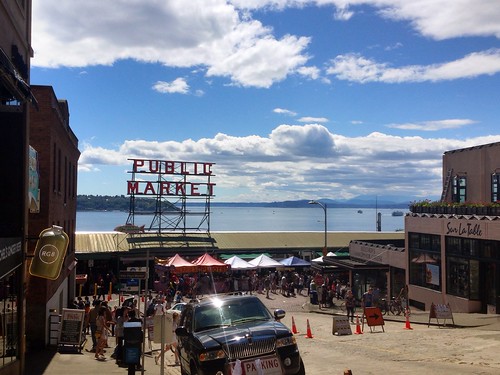 We soon came to a tiny little shop called La Buona Tavola (The Good Table, in Italian) that specialized in all sorts of delicacies.  We spent most of our time focusing on the truffle oils (not surprising, since the owner's sister married into an Italian truffle-hunting family) and then moved on to sample some of their other offerings, such as balsamic vinegar, pesto sauce, apple curd and bourbon salted caramel.  (Everything in this shop was fantastic; we came back here right after the tour ended so that Amanda could load up on things to take home.) 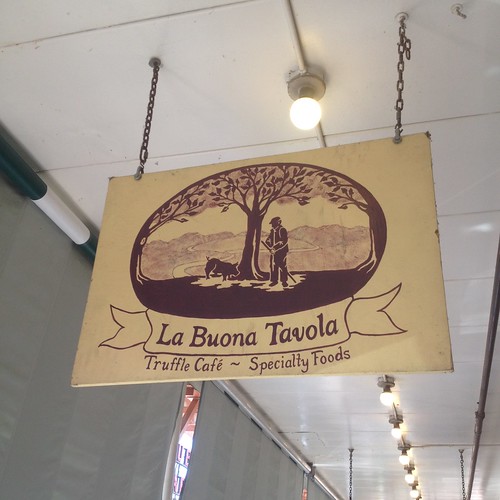 Leaving the Italian gourmet behind us, we walked around the corner to the Steelhead Diner.  The hostess greeted us and ushered us past the main dining room, through the kitchen (where we high-fived the chef and a handful of servers), and into a secluded back room where a large table had been set for our group.  On the menu for this location:  clam chowder!  Probably the best clam chowder I've had -- it wasn't the thick goupy stuff I'm used to; all very fresh and light.

Our next stop was at The Pike Pub & Brewery. The beer drinkers among us were treated to samples of some of the special beers that are micro-brewed on site. The rest of us enjoyed apple cider made from local apples and sausage and bread that each had beer as part of their ingredients.  I didn't love the beer bread, but I did think the sausage/mustard combination was very tasty. 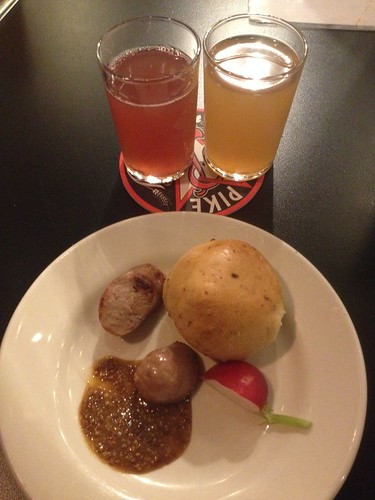 Leaving the brewery behind, we made our way to Von's Gustobistro, where we enjoyed a salmon cake (think crab cake, but with salmon) and some local "dry" soda.  Others in the group raved about the salmon cake, but I only thought it so-so.  (Maybe I'm not the right audience for this type of thing, though, because I was never a huge fan of the famous crab cakes of the Mid-Atlantic either.)

Finally, after a short walk up a hill, we landed at Gelatiamo. 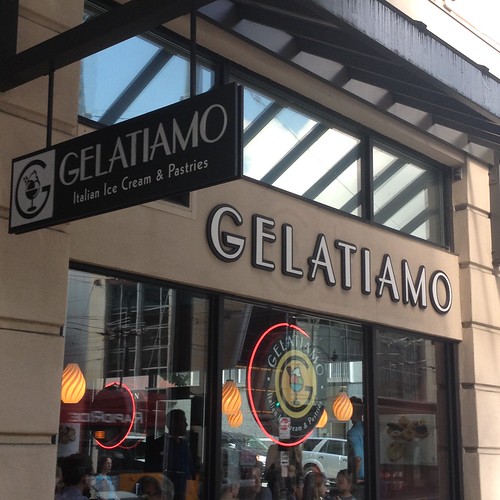 As you might suspect of a place with such a name, this place specialized in gelato and sorbets.  We had vanilla gelato (fantastic) and pineapple sorbet (meh).  Nick explained that the difference between ice cream and gelato is that gelato uses milk instead of cream and so is less fattening and doesn't need to be kept quite as cold.  As for sorbetto, it's only water, fruit juice and sugar -- or, as Nick put it, "it's the celery of ice cream." 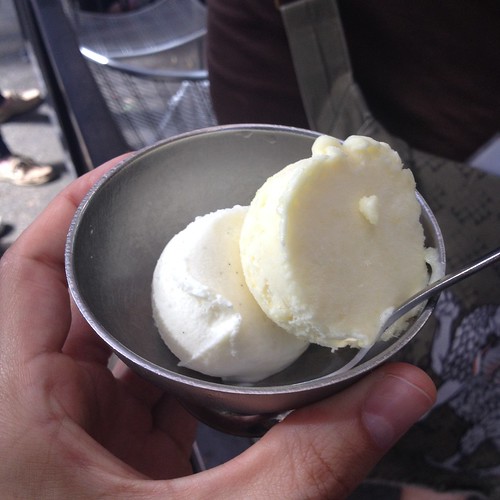 I admit I started this food tour with some skepticism as to how good it would be.  I mean, I would expect a good food tour in Vietnam and Japan, but Seattle?  Turns out, yes!  Nick was a fantastic food guide, providing all sorts of interesting commentary and background about the food we were eating, the restaurants/chefs that made it, and the history of the city.  We ate some really great things, and I'm definitely planning to go back to some of those places.  Most of all, it helped me see Seattle through the enthusiastic eyes of both the eager tourists (our fellow eaters were, to use a bad pun, eating everything up) and the proud local guide who thinks that Seattle is one of the best food cities on the planet.  It made me more hopeful that it'll be a good place to live after all.

So, the tomato soup cupcakes ... that is actually a recipe fad from the mid-century period (think 1950s). It was developed in the Campbell's Soup test kitchen. I have several incarnations of it saved in my retro recipe file.

Yes, that's right. The owner of the cupcake shop said the tomato soup recipe first emerged during the Great Depression. In fact, he said he credits the Great Depression with pushing people towards a sort of "home gourmet" mentality -- since people couldn't afford to go out to restaurants anymore, they had to get inventive with the ingredients they had on hand at home.

I've always wondered if it would be good. One day, when I have more time (hahaha)I want to recreate some of these retro recipes I collect. Of course, I'm totally not recreating anything encased in a jello....because, that's why.