When we decided to come to Japan this summer, I told Amanda that climbing Mount Fuji was my top priority on my list of must-do activities.  In fact, it was my only must-do activity.  Why?  Well, why not!  Although not the tallest or most difficult climb in the world, Mount Fuji ranks among the most famous peaks in the world and may be the most iconic:  the perfect symmetry of that volcanic cone is almost synonymous with Japan, figuring prominently in the physical, cultural and spiritual worlds of Japan.

Besides, everyone's doing it.  Each year more than 300,000 people scale the slopes, and even more flock to its lovely foothills to catch a glimpse.  And with stories abounding of 80-year-old women and little children making it to the top, it seemed a shame not to go myself (yes, I'm willing to compete with old women and children).  Especially when the best reason anyone could give me for not climbing the mountain was that "after a while it's just really steep and rocky."  I mean, doesn't "steep and rocky" basically describe any mountain?

Old women and children notwithstanding, I knew I would need to take this climb seriously.  With an altitude of 12,380 feet (3,776 meters) above sea level, it's a legitimate mountain, and the conditions can be treacherous.  Plus, I don't speak Japanese and most Japanese don't speak much English -- I didn't want to get into any trouble and find myself unable to get help.

So I did some research and discovered the Fuji Mountain Guides, a mountain guide operation founded by some young American guys who had grown up in Japan.  The details offered on the website inspired confidence, and the available climb dates fit my itinerary, so I signed up for a two-day climb and a bunch of rental gear.

On the morning of July 3, I met up with the guides and the rest of our group in the lobby of the Keia Plaza Hotel, not far from Tokyo's sprawling Shinjuku Station.  It was easy to pick out the climbers, for the most part outdoorsy looking folks sitting bleary-eyed on the fancy couches with hiking boots and backpacks.  This made it easy for the guides to round everyone up and have us sign the obligatory waivers and listen to the plan for the day.

Normally, they explained, we would climb most of the way to the summit on the first day, spend part of the night in a mountain hut, and then finish the ascent in the wee hours in order to be on the summit for sunrise.  Not this time, though.  The latest weather reports predicted worsening weather today and terrible weather tomorrow -- not only would we not see the sunrise, but the windy, wet conditions would likely make it unsafe even to attempt the final ascent.  So to make the best of it, the guides proposed that we push straight for the summit on the first day, go down to the hut for the night, and then finish the descent in the morning.  Sounded fine to me!

The mountain trails are divided into eight "Stations".  Most climbing groups start at the Fifth Station on whatever trail they're climbing and sleep at the Eighth Station (the last before the summit).  It took us about three hours by bus to get from Tokyo to our fifth station.  The clouds were pretty thick, but as we got closer to the mountain occasional breaks would allow glimpses of the mountain floating ghostlike above the countryside. 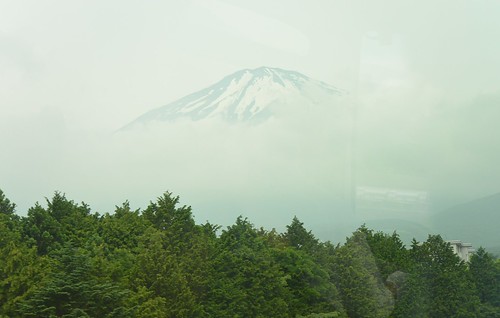 Soon we found ourselves winding our way through the foothills, up the wide base of the cone.  The forest was lovely and dense.  Our guide explained that the forest was named (rather redundantly) the Forest of Trees, and that it was the top suicide spot in Japan.  Apparently the Japanese believe that your spirit goes to high places after death, so why not make it easier on yourself by dying in a high place to begin with? 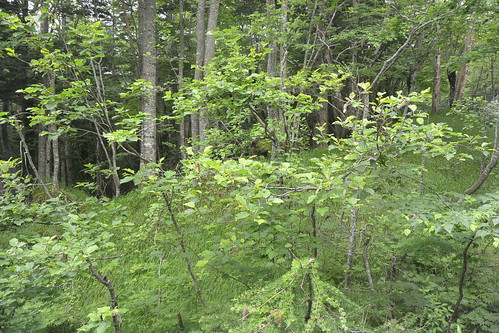 We made it through the Forest of Trees without any suicides (though our sputtering bus seemed to have been considering it) and got to the Fifth Station.  Everyone climbed out of the buses into a chilly, misty world. 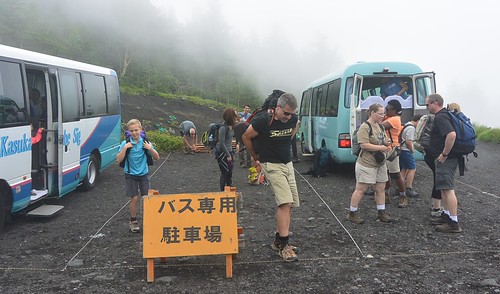 We regrouped in one of the Fifth Station huts.  We were admonished to take advantage of the free toilets (from here on out, they'd cost $2 a visit) and cheap water (only $4 for half a liter, instead of $5).  People stretched, put on additional warm layers and repacked their gear.

I packed my gear for the first time.  Not wanting to fill my luggage with bulky climbing gear, I basically only brought shoes, long underwear and a gazillion granola bars from home.  The rest of the gear -- backpack, gaiters, waterproof jacket and pants -- I rented from the guides.  I had brought all my stuff in a large nylon shopping bag, and it was a relief to finally look like a serious hiker! 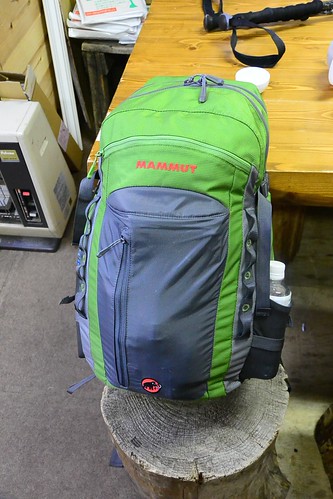 After one last pep talk from the guides and instructions on where the fast group should stop and wait up for the rest of the group, we began our ascent. 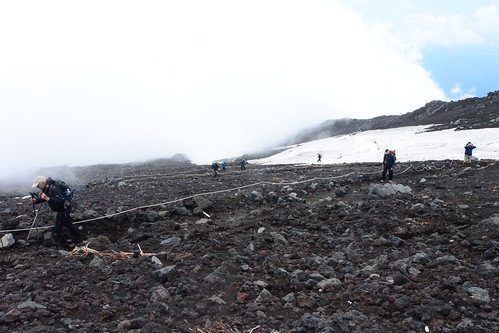 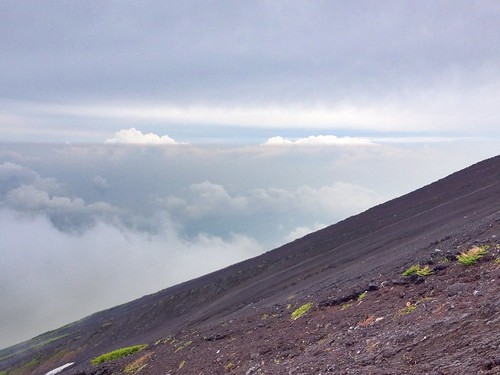 The climb was not easy.  Between the steepness, the weather, and eventually the altitude, it took determination and effort to keep going.  But finally we made it!  We passed through the Shinto gates and crested the rim of the crater; the deep bowl of the crater opened before us.

The wind and rain were even worse at the top, and it was pretty miserable (I quickly donned the last of my warm clothing and all of my rain gear).  We couldn't see anything but the rocks in front of us, but still -- the summit! 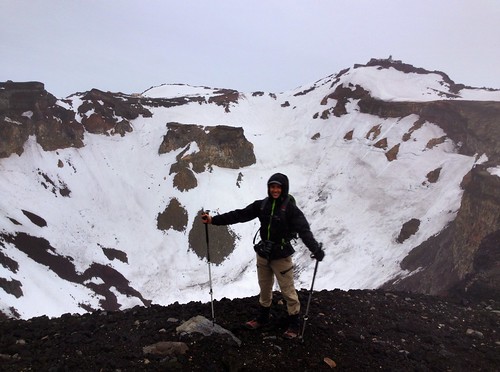 Well, technically not the true summit -- the true highest point of the mountain was on that ridge behind me in the photo above.  But the path to that ridge was covered in sheer ice, and none of us had brought our crampons and ice picks.  Standing on the crater was enough for me and Steve (the Australian), but not Eric (the Dutchman).  Eric, we had learned on the hike up, was a serious mountaineer (he's doing Everest next year) and refused to say that he's "climbed" a mountain unless he'd gotten to the true highest point.  Crestfallen, he said, "Oh well, this was a nice training hike.  I'll have to climb Mount Fuji some other time!"

I have to say that for as much satisfaction as I got from the physical accomplishment of climbing the mountain, the real fun of the trip came from the people I climbed it with.  Eric, Steve and I were the fastest in the group, so we formed a natural little team as we climbed together.  There were probably ten years' difference in age between each of us (I was the youngest, then Steven, then Eric), but our senses of humor, level of competitiveness, and relish for the activity helped us form a quick friendship.  There were others, too, that we got to know along the way, such as Scott (in the picture above), who is from Nashville and was climbing a mountain for the very first time in his life.

The camaraderie we had on the mountain is one of my absolute favorite things about international travel -- people from so many different countries and cultures coming together in a place that is foreign to all of us, but through the process of experiencing that new place and getting to know each other, we sense our common humanity and build a new community of friendship.