I love dance.  In the eight years since I moved to the East Coast, I've seen a lot of it.  As with anything, the more you see and know, the better you can judge the quality.  If you'd asked me this morning what I thought were the best dance performances I'd seen, I would have listed the Alvin Ailey American Dance Theater's performance of Revelations that I saw at the Kennedy Center in 2005 and the Paris Opera Ballet's performance of Prokofiev's Cendrillon that I saw last November.

The history of this piece is as follows:  John Milton wrote two poems, L'Allegro (Mirth) and Il Penseroso (Melancholy), that were published as companion pieces in 1645.  In 1740, George Friedrich Handel and his librettist interwove those two poems into a single poem, added a third poem called Il Moderato (Moderation), and set the three poems to music in a pastoral oratorio for solo voices, orchestra and chorus.  In 1988, while in residence at the Theatre Royal de la Monnaie in Brussels, Mark Morris choreographed an evening-length dance to the oratorio.  That is what I saw tonight.

The music, performed live in the orchestra pit by a strong orchestra and excellent baroque singers, was very lovely and had the best of everything I love about Handel -- delicate melodies, lively choruses (including one similar to the Hallelujah chorus), lots of ornamentation.

The set and lighting were breathtaking.  There was a series of rectangular arched panels that framed the stage, spaced evenly from front to back, and between which sheer scrims could be lowered and raised.  The panels and scrims were lit with rich and various colors and, when the scrims were moved, the effect was of being immersed in a moving Rothko painting. 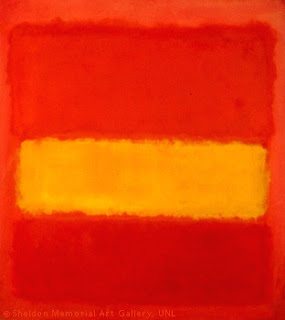 Through that landscape the dancers moved with incredible grace, lyricism and expression, performing lovely choreography that was neither quite narrative nor entirely abstract.  It was beautiful and moving and sometimes whimsical -- and it captured, in an astonishing way, the essence of mirth and melancholy that Milton had sought to convey in his poetry.

During intermission, I heard the man behind me say the choreography was like a painting, and I couldn't have agreed more (obviously, art already was on my mind).  The tableaux that emerged through the movement seemed to be what might result if you mixed a Rubens with a Seurat and then framed it in a Rothko.  It was, to my mind, the best sort of performance, where all the art forms combine to create something so lovely that, for a moment, you forget the rest of the world and want for nothing but what you have before you.
Posted by JJD at 11:32 PM

I'd love to see a phenomenal dance program. It's been way too long since the last time....