The major projects that had kept me so busy through the end of the year are now completed, and the few other projects that I still have are slow-moving and small.  I decided that before I volunteered for any new assignments, I needed a vacation.  So... off to Las Vegas chez les parents!
﻿
﻿
Lady and Dad met me at the airport when I arrived late Friday night.  When we stopped for Mexican food on the way home, they asked me if there was anything in particular that I wanted to do while I was here.  I said no, other than to spend time with them.  And so, for the next couple of days, I get to turn off my Type A, plan-obsessed self and go with the flow.  So far it has been a lot of fun.

Our first excursion was to see Hoover Dam and the new Bypass Bridge that has been built to alleviate traffic on the old dam road.  The dam was authorized by President Coolidge in the 1920s, built during the Great Depression by President Roosevelt, and named after President Hoover.  It's a remarkable structure that provides drinking water to Las Vegas and the surrounding area, as well as electricity to Los Angeles. 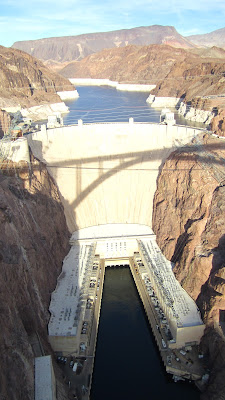 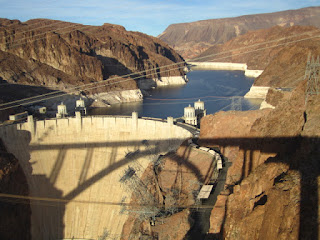 The state line between Nevada and Arizona runs down the middle of the river, which means we got to do a little time travel as we crossed the bridge (AZ is in the Mountain Time Zone, while NV is in the Pacific Time Zone). 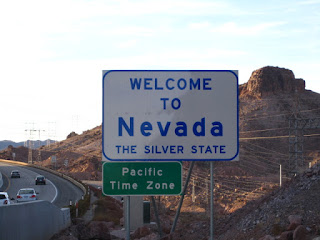 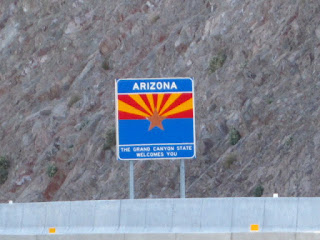 After crossing the Bypass Bridge, we went down onto the dam itself. 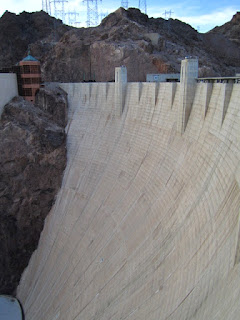 On the Nevada side of the dam, there are sculptures celebrating the grandeur of the dam-building project.  Also a very Da Vinci Code-esque mosaic floor that was designed to be read by extraterrestrials, in case they are interested in figuring out the exact date on which the dam was completed. 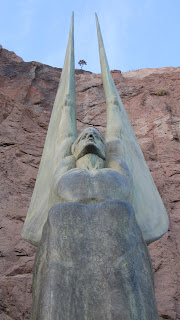 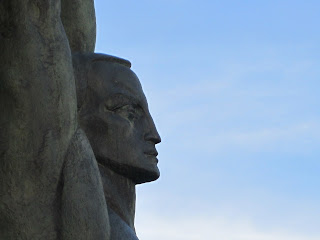 As dusk fell, the water was like glass.  Would have been perfect for water-skiing.  (Too chilly for my taste, but the parents thought the quality skiing would have outweighed the inconvenient temperature.) 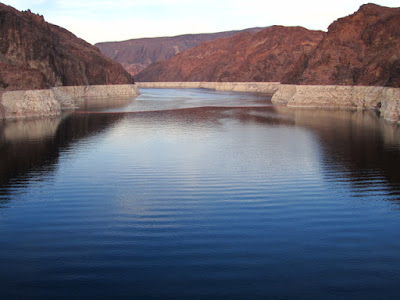