A new aquarium recently opened in Boise.  It's a relatively small affair, stuck in a random strip mall between a pawn shop and a party place.  But it's the only aquarium in town and had been getting a lot of attention among the younger-than-ten crowd.  Since yesterday was a day off from school, Heather and I took the kids to check it out.

The first exhibit showcased colorful tropical fish of the sort that kids would know from their books and movies like Finding Nemo.
﻿That hallway led to a wide room with various "petting" pools.  One was an old boat and filled with giant clams and anenomes. 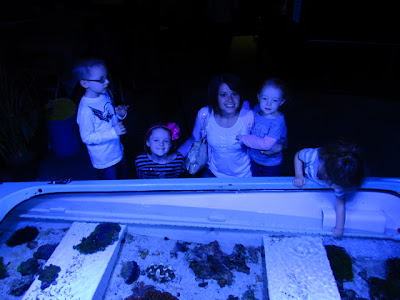 Another pool, infinitely cooler, had sharks and rays.
﻿﻿
﻿﻿While the other kids (and not a few parents) cheerfully splashed in the water as they reached in to pet the rays, sharks, and other fishes, the Allen kids kept a skeptical distance. Those critters might be fun to look at through the glass, but NO WAY were they going to touch them.
But then Mom and Uncle Jason started getting our hands wet . . .

and suddenly everyone started feeling much braver. In the heady rush of having touched a creature as dynamic and dangerous as a rock -- without losing a single finger! -- the kids decided they were ready for larger prey. Back to the shark and ray tank! Some of us, with shorter arms, resorted to baiting the leviathan with small dead fish (which, alarmingly, reminded me of a certain meal I had a couple of years ago in Croatia...). Unfortunately, no quantity of baitfish would compensate for the length of three-year-old arms.  So Shae stuck to shallower waters and their immobile mollusks. From there, we moved down the hall to see the lion fish and, after much waiting, the feeding of the eels.  Unfortunately I don't have any photos of the feeding.  The caretaker (whom I'll call Rapunzel) let her unruly tresses dangle in front of the tank in a manner that obscured all interesting munching.

The kids had a blast and talked about their aquatic adventures for the rest of the day.  My view is that the aquarium was off to a nice start but still had a ways to go.  Much of the facility was still under construction (we passed signs indicating where the otter and seal exhibits would be, and workmen were laying carpet around the clam boat), and the operation generally felt understaffed -- so my sense is they'll need another six months to get things fully up and running.  But still, a fun activity for a rainy January morning.
Posted by JJD at 1:19 PM