A Peruvian delicacy called anticucho, skewered beef hearts were common on the street vendors' grills that I passed in Peru. 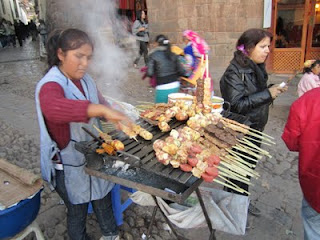 I'd never been brave enough to eat them, though, preferring to chicken out and (ar, ar, this pun wasn't planned) eat the chicken instead.  Tonight, however, I decided to give it a try.  I was eating at El Chalan, a highly praised Peruvian restaurant, and I figured that if any place was going to do it right (or at least safely, which might not be the same thing), this would be it.  I also appreciated that Amy (with whom I have seasons tickets to modern dance at the Kennedy Center) was willing to try it with me.

Turns out, it's delicious.  Very thin and extremely tender, it resembled a very fine steak.  But if you paid attention, you could see how the strips could be reformed into the shape of the heart's chambers, and there were holes where the arteries would have gone out.  (I tried not to pay too much attention.)

The rest of the dinner was tasty, too.  I had lomo saltado especial, which consisted of strips of filet mignon that had been sauteed with onions, potatoes and tomatoes, served on a bed of rice with a cilantro garnish. 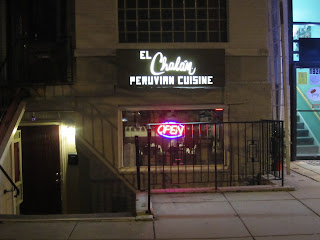 Good for you. I'm never that brave no matter how well it's prepared. Lady

Have you ever eaten tongue!? It was tasty and very tender, but you could see the taste buds on it still and I had a difficult time getting over the visual aspect! I can't imagine eating something that used to have BLOOD VESSELS!!! coming out of it!