And the winner is...

Ashley!  Amongst her many suggestions was a pendant lamp that looked like a doily draped over a light bulb.  Ever eloquent, her accompanying comment was "Uuuuuuuuhhh.....???"
﻿
To which I said, "Of course!  Tord Boontje!"  Because the droopy doily is actually called "Midsummer" and was designed by Tord Boontje, a Dutch designer who makes incredibly cool things.  I'd first encountered his designs in New York (you can find his stuff in hip design stores and at MoMA) and had been following him over the years as he's won various awards.  I had meant to keep him in mind for when I was finally trying to furnish an apartment -- but clearly I needed a reminder, which is precisely what Ashley provided.  As soon as I saw her suggestion, I knew exactly what lamp I wanted to get:  Tord Boontje's Garland Light.

The Garland Light consists of a bare lightbulb suspended from a white cord, with a metallic floral garland draped around the bulb.  I opted for the brass garland -- it looked loveliest in the photos on the Artecnica website, and I thought it would complement my yellow chair nicely.  When the garland arrived, it's pretty sparkliness confirmed my choice -- but I got nervous about whether I would be able to turn this... 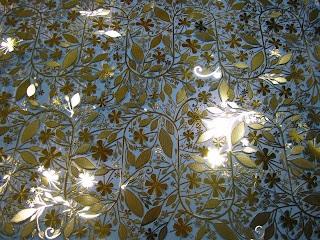 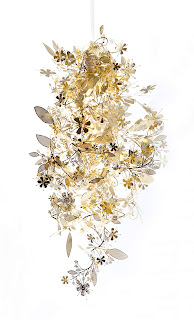 I consulted various blogs to get others' takes on how to do it right.  Most of the accounts I found were from women who gave dire warnings about what a frustrating and tedious process it was -- it was bound to take me HOURS to finish and by the time I was done I would be in TEARS and SWEARING.  Sounded to me like changing the sheets on the bunkbed when I was little (except that, there, Lady was the only person who was allowed to swear), so I figured I could handle it no sweat.  And . . . ta da! 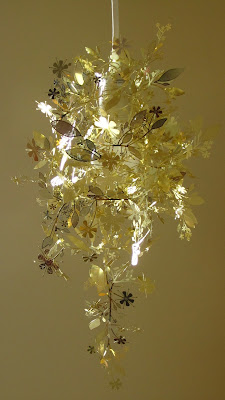 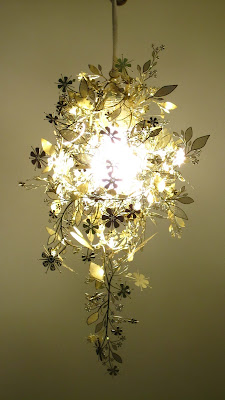 About an hour.  No tears.  No swearing.  I may have a talent for arranging brass garlands.
The next step was to figure out how to hang the damn thing (shoot! I guess the bloggers were right about the swearing after all).  I couldn't screw any hooks into the ceiling because it is solid concrete, and all the brackets I found in the hardware stores were either industrial or horrendously old lady.  So I ordered a short swing-arm curtain rod and wrapped the cord around it.  This has the added advantage of allowing me to swing the arm around to cast light on the balcony for summer reading. 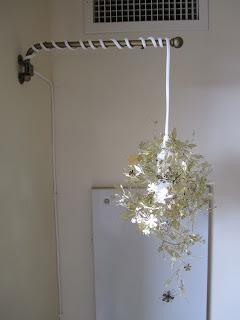 I'm thoroughly delighted with how it all turned out.  The room is brighter than before, feeling much livelier.  And the shifty, glinty nature of the garland adds intrigue to a once bland corner.  I now spend my evenings sitting on my couch staring at the lamp.  It's incredibly cool. 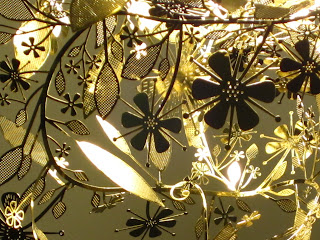 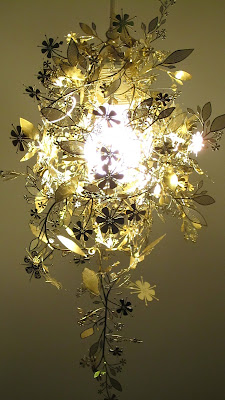 So, there we have it.  The happy ending to a months' long saga.  Thanks to everyone who contributed ideas -- and also to Jennifer and Mark who sent my camera back from Guatemala so I could give you these pictures.
Now I need another project . . . .
Posted by JJD at 11:00 PM

(Oh, my virgin ears! ...er, eyes!) Very cool indeed! I approve. (I'm so glad my approval means so much to you!) And the swing arm idea is brilliant.

Very beautiful lamp! (I know you were just dying to work that expletive in there somewhere.) Lady

So, I went to the website and watched the tutorial on the vine application. Looks to me like you just wad it up and there you have it. My question is, what happens when the light bulb burns out? That's where I see great potential for swearing. Lady