Last night after work I met up with Amanda and we ushered in the weekend in proper style with dinner at Maze by Gordon Ramsay, at the London Hotel.  It was described in the Michelin as "the Pippa to Gordon Ramsay's Kate Middleton," "sexy and elegant," and "chic-Paris in its smoky-mirrored, teal banquetted, shimmering glass art deco glory."  Although it was listed without a star, it still had three forks, which meant it was going to be very comfortable.

Comfortable it was.  The description of the ambiance was spot-on -- it was the sort of color scheme and decor that suited my tastes very well.  We felt very elegant indeed at our little table in the corner. 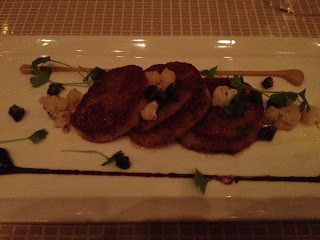 Followed by an 8 oz dry aged strip loin steak with creamed spinach and potatoes.  There was a white sauce that seemed innocuous at first but turned out to be intoxicatingly delicious -- I couldn't tell what it was, but it made me think of an emulsion of a salty cheese, if there is such a thing. 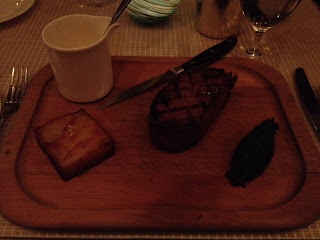 I finished (we both did) with a Valrhona chocolate fondant with green cardamom caramel, sea salt and almond ice cream.  This was, by far, the highlight of the night.  That cardamom caramel was a knock-out with the warm, melty dark chocolate. 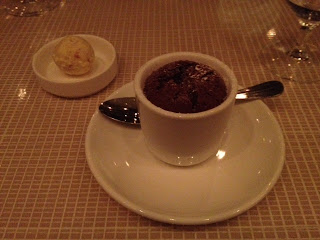 The food was all very good, although Amanda seems to have ordered a couple of the less-stellar options on the menue, and we agreed that it didn't rank among our very top gastronomical experiences.  Even so, the "Frenchified" atmosphere was wonderful and further enhanced by a young French couple sitting next to us.  Their English was clearly very poor, and they struggled for quite a while with the menu before ordering.  Then, when their food came, there was general amusement and surprise.  For example, when I heard the woman exclaim, "What?  I ordered soup?  I thought I was ordering potatoes?"  I realized she must have ordered the sweet potato velouté.

We had decided some weeks ago not to see a play after dinner.  Instead, we enjoyed our dinner for as long as we wanted, without the tyranny of the curtain time, and then made our way to a nearby cinema where we watched The Hunger Games.  We both had read and thoroughly enjoyed the books and were curious to see the new wildly successful movie.  Overall, I think it was well done.  I hated the hand-held photography at the beginning, but I thought the overall storytelling was good enough to let the compelling story come through.  At any rate, I was properly disturbed and stressed out through most of the film as the teenagers battled each other to the death for the benefit of an authoritarian state.  (Also, Lenny Kravitz can pull off gold eyeliner surprisingly well.)
Posted by JJD at 9:22 AM