New York - Remind me why I don't live here?

I'm working out of the New York office today.  I'm on the 42nd floor, with awesome views of the Hudson River and New Jersey.  With floor-to-ceiling windows, the office is bright (so bright, in fact, that I can't see my screen very well) and I love it.  It's a marked difference from the shady 6th-floor window in my DC office. 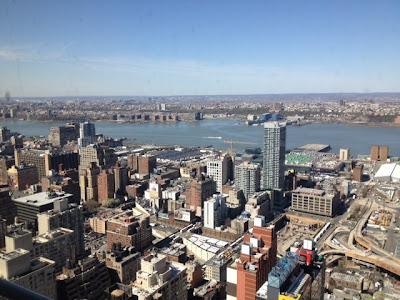 It feels good to be in New York.  I came up yesterday on the train.  I was about to say that I'd come up "after work" but I actually ended up working the whole way -- work doesn't stop just because you're on a train without email access!  So my thumbs got a great workout on the Blackberry, and the poor junior associate who's working for me had to put up with me calling him every few minutes to ask him to send documents to so-and-so with such-and-such in the cover note.

The stream of work didn't stop once I got to New York.  I checked into the hotel and proceeded to work a while longer while Amanda finished up at Sleep No More.  (We're staying at a decent midrange hotel in Mid-Town that is definitely a step down in price and quality from the JW Marriotts I'm used to staying in during work travel, but, oddly, it's equally comfortable to the W -- which the W probably would not view as a compliment).

When Amanda arrived, full of wonderment and glee from her theater experience, we chatted for a while as she freshened up (mask hair!) and I fired off a few more emails to impatient partners.  Then we headed out to Danji, a Korean restaurant that had gotten rave reviews in the papers and a star in the Michelin Guide, and which had the added plus of being open until midnight.

Or so we thought.  We arrived at 10:50pm, delighted to see that there was a table for two available (they don't take reservations) only to learn that they had closed the kitchen at 10:45.  We protested and referenced their website, which they acknowledged was wrong, and found ourselves out on the stoop wishing we had kept our mask hair and made those partners wait.  Boo.

Still on the verge of starvation (though not quite as on the verge as I would have been, had I not taken precautionary measures earlier in the evening), we set out to find Plan B at 11:00pm.  This being New York, we had plenty of options.  Naturally, we chose a hamburger joint that had a line around the block and was standing-room-only inside.  You know, something low key.  The Shake Shack has been around for a few years now (and they recently opened a shop in DC) and is enormously popular, but I'd never eaten there.  Seemed like a good time to give it a try.

We waited dutifully in line listening to a local policeman complain about the cold and a tourist competitively declare that it wasn't as cold as Minnesota.  After a while we mashed ourselves inside, where Amanda was able to read the menu and I could admire a guy who was rocking a double-breasted navy blue cape, black leather driving gloves and some eccentric spectacles (my yellow pants would have gone perfectly with that outfit).  We fretted for a minute about where we were going to sit, but then Amanda managed to snag a table that came free before 87 other people grabbed it (she's good at handling crowds like that).

And the food?  Meh.  The first bite was tasty enough, but the burger soon registered as very salty.  And the shake was a little too milky smooth for my taste -- I would have liked the texture a little rougher.  So it was fine but not great.  I'd rank it as better than In-n-Out but not as good as Five Guys. 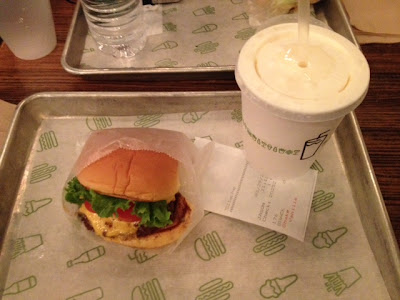 We chatted until about midnight and then wended our way back to the hotel.  Amanda had the whole day ahead of her, but I still had to work.  Which is what I've been doing so far all day.  But I think the end is in sight, though -- the crazy deal has hit a snag that has prevented it from closing until next week.  While this prolongs the craziness, it also means that there will be a lull over the weekend -- which is exactly what I wanted.  Dinner, opera, theater, movies -- here I come!
Posted by JJD at 5:59 PM

I hope you certainly did take your yellow pants to NY! Of all the places to rock them.....