There was absolutely no point in having me stay in Chicago for another day of negotiations.  We got to the offices and were shown into a conference room by the receptionist.  We then got an email from the associate on the other side (my counterpart) informing us that he was in another meeting at the moment and would be there as soon as he could to go over his comments on our last draft of the agreement.  No sign of the partner on that side; even less of their client.  So much for yesterday's plan of everyone meeting together one last time to hammer out the details.  We went into this deal knowing that the guys on the other side had a reputation for being jerks, and they were clearly delighting in living up to that reputation.

Of course, we had no choice but to wait.  There was nothing to do.  I couldn't talk with my client, who was storming around the room speaking fast and loud in Hebrew into his phone (well, mostly in Hebrew -- some of the more colorful English curse words popped out every now and then).  I logged into my firm's network and tried to work on other projects, but there's only so much you can do when you're sitting in a different state with no printer and none of your other files.  So eventually I got up and wandered around the conference floor taking pictures of the view from where we'd been sitting for the past three days. 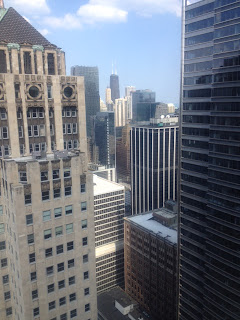 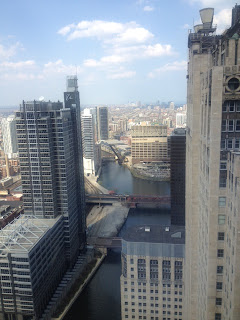 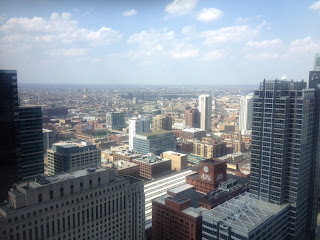 After more than an hour of waiting, the other lawyers came in (along with lunch, at least they had that  much consideration) and told us, as per usual, that they wanted some major new term.  Then they flipped through our draft of the agreement picking on little things that they didn't like (most of which we succeeded in preserving).

And then they were gone.  It was the middle of the afternoon, we'd had a totally unproductive 30-minute meeting, and we were done for the day.  So we had our respective secretaries move up our respective flights and headed out to O'Hare, where we managed to sail through security (a small miracle in that airport, which in my mind is second only to Charles de Gaulle for being a horrible airport to fly through).  When my client realized I was flying coach, he magnanimously tried to get me upgraded to first class (alas, it didn't work because everyone in first class had already checked in).  While waiting to depart, we had a couple more calls with other lawyers regarding outstanding issues.  Again, not much progress was made, but at least it was something.

Fortunately, this was not the height of summer thunderstorm season, so we were able to take off without incident (other than a 45-minute delay) and get to DCA safe and sound.  It feels good to be home!  (I'm trying not to think about everything I'll need to do in the morning to compensate for being gone an extra day.)
Posted by JJD at 12:08 AM