Baltimore is an odd city with a lovely inner harbor. 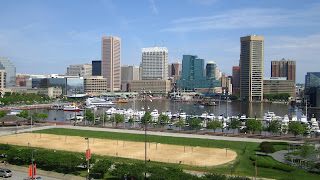 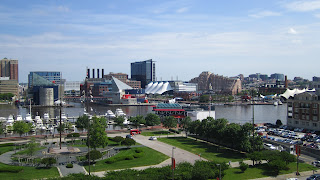 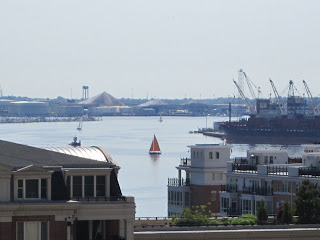 Nautical tranquility is nice, but that's not why I went to Baltimore on Saturday.  The goal of the visit was to see the craziness that is the annual Kinetic Sculpture Race.  Think of this race as what you might get if the Macy's Thanksgiving Day Parade had a kid with the Pinewood Derby Race, and that kid grew up to be an artist and/or hippie who liked to weld bikes together.  People make outlandish contraptions that are capable of propelling themselves over a course several miles long, over hills and mud obstacles and a water loop over the harbor. 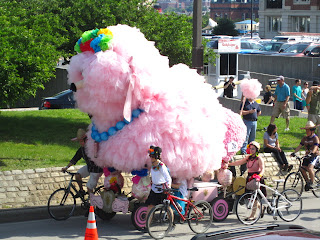 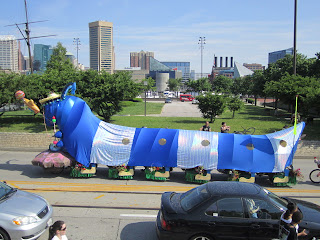 After watching the grand start, we jumped onto the water taxi to wend our way (very slowly) around the harbor to see the water loop.  Along the way we met a chatty young woman carrying a giant camera and wearing a t-shirt from a Susan G. Komen charity race.  She enthusiastically told us about everything else that was going on in Baltimore and, in so doing, lots of carefully selected details about herself:  she runs a lot, she's teaching herself photography (when not running), she's a graduate student researching breast cancer and pursuing a joint degree ("yeah, I mean, someday people will refer to me as 'Doctor Doctor'"), and she loves (LOVES! almost as much as running) public transit.  Most of these details were conveyed in the form of bait to get us to ask more about her.  I was torn between the fun of resisting the bait and the fun of taking the bait just to see how she could work in yet another reference to how much she runs. 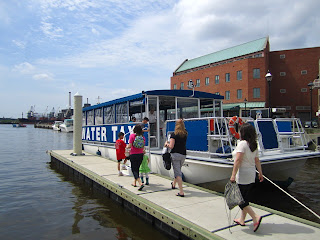 We also encountered a ferry-boat that would only back up in one direction.  We were hoping to get to the other side of the harbor quickly so that we could see the contraptions do their water loop, so we took what was supposed to be the most direct water taxi.  The boat was docked in an angle between a buoy and a giant schooner, and rather than just driving out between them, we did (I kid you not) a forty-point turn bumping against the dock and the buoy to get out into the open.  "Don't worry," said the Captain, "It's the boat, not the captain. It just only backs up one direction, which is fine if it's the direction you want to go -- kind of a pain when it's not."  Really.

Still, we made it to the water course in time to see many of the floats, well, floating out around the bend.  Surprisingly, all of the contraptions floated, and most of them were able to propel themselves forward somehow or other.  (I admit, it was kind of disappointing.  I was really hoping for a pink fluffy Titanic moment.) 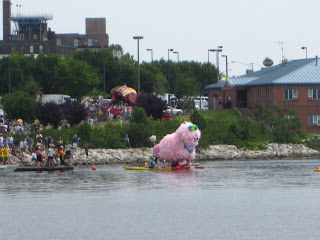 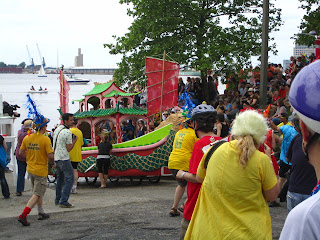 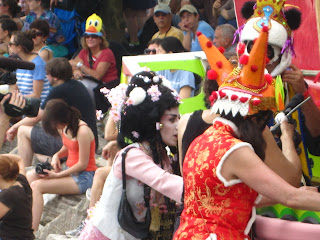 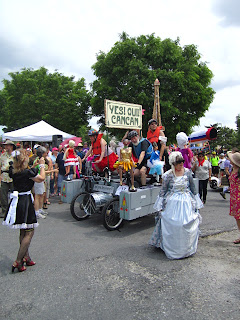 I had to be back in DC by early afternoon, so we weren't able to stay for the muddy obstacle course or see the ultimate winner.  Still, it was a fun time filled with colorful characters and a nice chance to see Baltimore again (which I hadn't visited since 2002, when I went there to be an extra in Chris Rock's movie Head of State).
Posted by JJD at 11:37 PM

Email ThisBlogThis!Share to TwitterShare to FacebookShare to Pinterest
Labels: Travel