Tired Legs (despite and because of the weather)

It's a perfect spring night.  After a gloriously warm and sunny day, the evening has cooled to a comfortable chill, without a trace of wind.  I'm sitting on my balcony surrounded by flowers, listening to Prokofiev's ballet score to Cendrillon, and enjoying the enforced immobility that comes with very tired legs.

I spent some time this weekend out on the bike, you see, and my legs are reminding me that (a) I haven't ridden for about seven years, and (b) I'm not 18 anymore.

As I mentioned before, the weather this week has been awful.  It rained heavily most of the week, and when it wasn't raining it was cold and overcast.  I managed to ride for about an hour on Thursday, but I really wanted to do a longer, more intense ride on the weekend.  So when I awoke on Saturday to another cloudy day in the mid-40s, I headed over to the bike store to pick up some cold-weather gear.

From a budgetary perspective, the gear-heavy nature of cycling is less than ideal.  But from the perspective of playing dress-up, it's awesome.  There are more outrageous varieties of clothing items than for any of my other activities.  I hit the winter-clearance rack and came away with a windbreaker vest, a long-sleeve jacket, arm warmers . . . 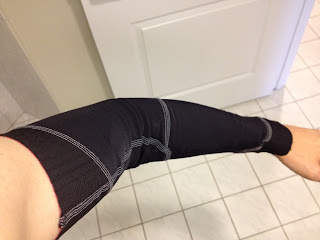 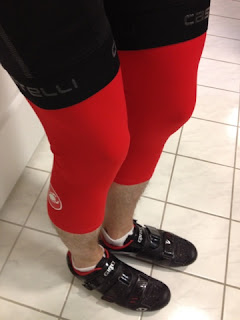 The knee warmers came in black, too, but I figured, heck, when else am I going to run around in flaming red tights? 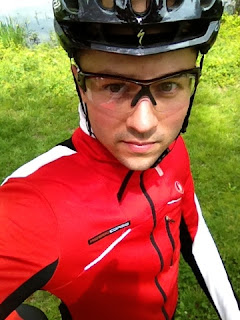 With these new wardrobe additions, I was set to face the elements.  I rode for two hours and covered a little more than 30 miles -- I went west, away from DC, out to a town called Reston (you can see a map of the trip at the link under the "Garmin Connect" heading in the right-hand column).  Because of the cold, I had the road largely to myself, which was nice.  Especially when I came to stop signs and almost fell over before I could get my feet out of the pedals (having red legs doesn't prevent one from being a spaz).  By the end of that ride, I was officially worn out.  I uploaded my ride data into my Garmin account, sat in the shower until I was pruned, and then went to the bookstore to compare translations of the Iliad.

I'd thought that would be the end of my riding for the weekend, but then the weather today was so beautiful that I felt it would be a crime not to go out for a little ride after church.  Well, that "little ride" quickly turned into another two-hour 30-miler.  I started out just exploring some of the paths I used to run on, seeing where they went beyond the point where I'd normally turn around when running.  But then I went down to the Potomac River and struck out along the George Washington Parkway, which is one of the most beautiful roads around -- you're surrounded by open parkland, with views over the bright blue river and the monuments and capitol building on the other side.  The going was slower than I'd have preferred, because I had to dodge the millions of walkers, runners, dogs, children and bikers who were also out enjoying the day.  Most of the time people were pretty good with the give-and-take of traffic, but there's a certain type of woman who, when in "walking" mode, won't budge an inch for anyone.

So now I'm doubly tired.  But happily so.  Sixty miles in my first weekend isn't a bad start, and I'm excited to continue.  Plus, I now feel perfectly justified just sitting here being calm, reading and listening to music.  (As you know, as much as I enjoy reading and listening to music, I'm not very good at being calm enough to do them in a leisurely manner -- too many things to accomplish!)

Email ThisBlogThis!Share to TwitterShare to FacebookShare to Pinterest
Labels: Cycling

Sounds great! A far cry from our riding through the Grande Ronde Valley with our windbreakers that would blow up like giant balloons while riding in a wind... Lady