While opera was the primary objective of this trip to New York, food was an certainly an ulterior motive.  As thanks for many hours of hard work last year, one of my clients gave me a generous American Express diner's gift card.  I could think of no better way to use that gift card than by exploring the culinary marvels of New York with Amanda.  As noted on Thursday, we missed the first of those marvels by five minutes -- thankfully, the others came through to perfection.

We needed a place for brunch on Saturday before the opera.  It needed to be near enough to the opera house to minimize the stress of getting there on time, and it needed to be awesome.  So I made reservations at the Grand Tier Restaurant -- the restaurant inside the Met, on the balcony overlooking Lincoln Square.  Close?  Check.  Awesome?  Double check.

We arrived a few minutes before the reservation.  The guards checked our tickets and we were ushered into the inner sanctum (while the non-elect waited below for the house to open) and up the grand staircase to the tabled tier where we sat in tufted luxury in a sea of octogenarians.  Amanda observed that it was kind of like going to the temple -- if the temple were decorated with giant Chagalls and everyone wore pearls and Hermès. 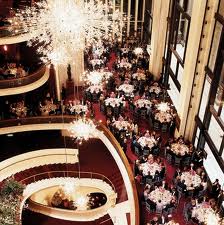 I ordered the wilde mushroom bisque... 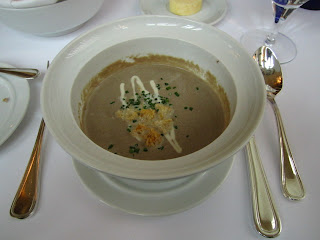 followed by salmon with risotto... 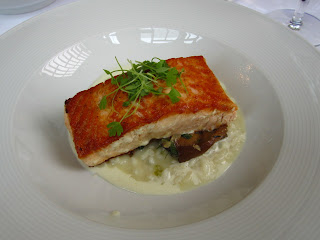 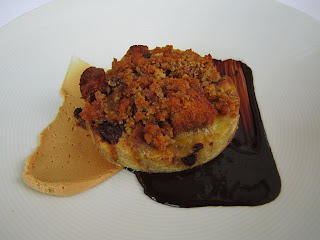 As fun as the Grand Tier Restaurant was (and it really was perfect for the setting), for dinner we took things up a notch.  Or maybe twenty notches.  I had made reservations at Gilt, a two-Michelin-starred restaurant (out of three) that is located in a gilded-age mansion just off of Fifth Avenue, behind St. Patrick's Cathedral. 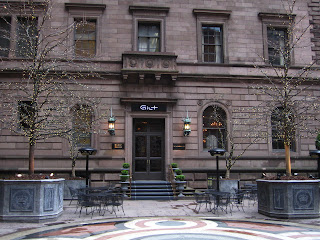 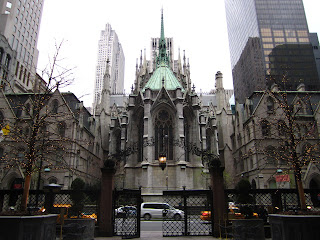 We got there early -- before they were officially open, actually -- so they couldn't seat us right away.  But they did let us wander around the mansion.  The marble staircases and fancy windows were lovely, but what really won us over was the library. 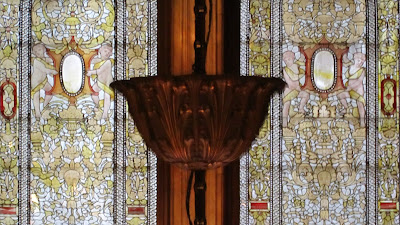 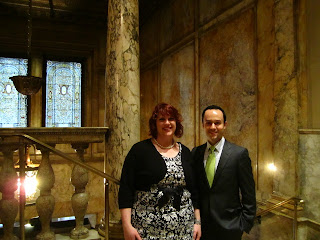 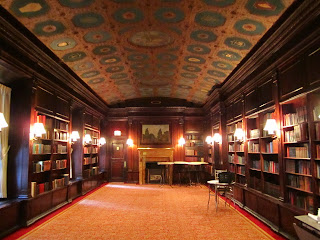 But we hadn't come for the decor.  When the clock struck 5:30, we descended to the dining room and entered a whole new world.  Beautiful women met us at the reception desk -  one whisked our coats and umbrellas off into a sideroom, and the other led us down the panelled corridor to a pair of massive sliding doors that opened into an opulent dining room right out of another era. 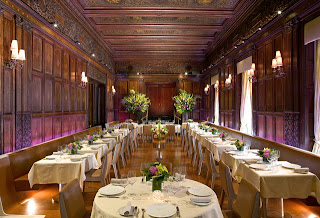 We were deftly seated and then greeted by an elegant waiter with a European accent:  "Good evening, Mr. Davis," then to Amanda, "Madame, welcome to Gilt."  At which point I became thoroughly convinced that being greeted by name by one's server is the only civilized way to dine.

We started with an amuse-bouche from the chef -- a tiny cup of lobster bisque with a dollop of creme fraiche... 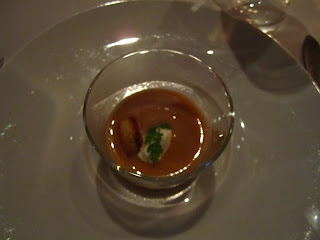 followed by foie gras with truffle, green apple, and little dabs of buttermilk... 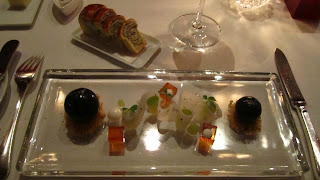 which, in turn, was succeeded by aged wild squab (a type of fowl) with smoked cabbage, turnips, mustard and walnuts... 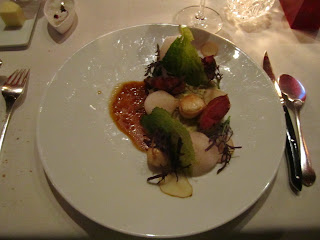 We then moved into the dessert realm with a treat offered by the chef, which consisted of grapefruit sorbet, ginger cubes, and candied beets... 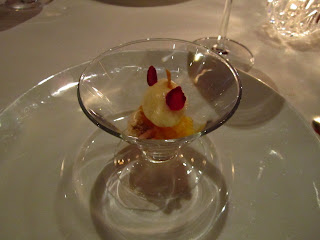 and then a "citrus" dessert comprised of blood oranges, key lime semifreddo, Meyer lemon bombolini and yuzu meringue (most of which made no sense to me, but they were delicious and refreshing)... 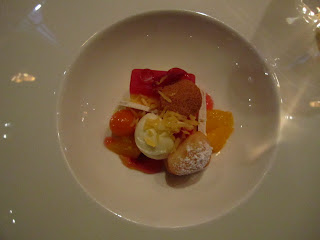 And of course the chef followed up with an offering of petit-fours -- I selected a piece of dark chocolate with hazelnut filling, and an elderberry profiterole. 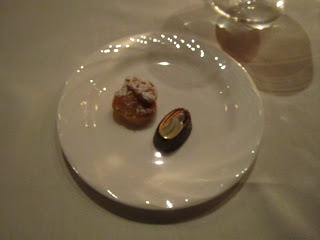 The entire experience was superb.  I don't even have words to describe the food -- it was delicious and delicate and beautifully arranged and perfectly portioned, and the flavors were subtle and complicated and almost always surprising (grapefruit with beets? amazing).  In fact, we had a hard time maintaining the flow of conversation because we'd take a bite and lose our train of thought, so captivating were the flavors.  It's the sort of experience I could certainly get used to!

Of course, now that we've done one-star and two-star restaurants -- and seen the difference between the two -- the next step is to get into a three-star restaurant... (which will probably spoil us for life).
Posted by JJD at 10:04 PM

A thought on being called by name in a restaurant, my husband and I went to a restaurant in Las Vegas, nothing fancy, really just a place that was conveniently located when we were starving, and the staff did call him Mr. Walker. Despite the wedding rings, holding hands and the huge pregnant belly (and yes, it's unmistakably a pregnant belly) they did not know what to call me. Madame would have been fabulous but instead it was basically left in the air, "Welcome Mr. Walker and . . ." Is it only in Vegas where they wouldn't dare call me Mrs. Walker? While I was impressed they remembered my husband's name, I was equally unimpressed that they couldn't figure out how to acknowledge me.