﻿You know how, when you were five, you'd get a new toy and it would be the awesomest thing ever and you'd want to bring it with you everywhere and take it to bed at night?  I kind of feel like that right now.  Thank heavens I have a queen-sized bed. 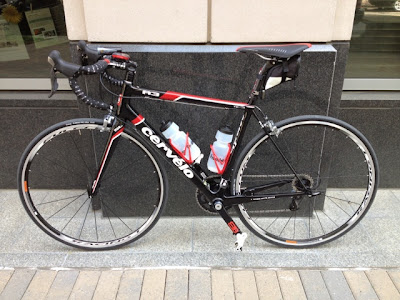 I fancied myself a cyclist once.  After getting my Eagle at the end of 8th grade, I was inclined to check out of the Boy Scounts (knot tying is interesting for only so long...), but then one of the Scoutmasters suggested forming Venture Crew devoted to cycling.  So I saved up $400 from my paper route to buy the best bike I could afford and started riding around the Grande Ronde Valley.  We did two big bike trips in the following years -- first through the Puget Sound, then through the Canadian Gulf Islands and Vancouver Island -- and I realized that I'd finally found a sport that I enjoyed.  The people I rode with (who included Lady -- I was in a Catholic-sponsored troop and therefore free of the church's exclusion of women from the Scouting program) were a lot of fun, and I loved the feeling of riding 20, 60, even 100 miles in a day (I only did the latter once).

I didn't ride quite so regularly during college.  I picked it up again briefly between college and law school but then found myself in a tiny apartment in New York with no place for a bike.  That's when I started running.  First it was just to relieve stress, then I realized that it was fun, too.  Eventually I ran a half-marathon (which I loved) and began training for a full marathon.  My knees objected, however, and for the past year I've battled some pretty significant knee pain that makes running more than three miles at a time risky business.

Which brings me back to cycling.  According to some folks, Washington DC is the #2 city in the U.S. for cycling (Portland is #1), and there is a wide network of cycling trails all around the city and the suburbs (that's what I'd been running on the past few years).  When my knee started acting up again this spring, I decided that it was time to get back on wheels.  I started with a couple of weeks of indoor spinning classes to make sure that the repetitive motions of cycling wouldn't exacerbate the problems caused by running.  Fortunately, spinning had no discernible effect on my knees -- if anything, my knees actually felt better after spinning.

Luckily for me, I live about a block away from Fresh Bikes, one of the best-reputed bike shops in the region.  This morning I woke up early, checked my bank account, and walked over to the shop determined to return as a fully outfitted road biker.  The folks at the shop were incredibly friendly and knowledgeable (also very biker-cool -- some piercings, a mohawk, shaved legs on everyone; the laid-back vibe was the genetic opposite of law firm neuroses).  I told them that I was basically starting from scratch and invited them do the rest.  Three hours later I walked home with three bags full of gear and brightly colored spandex.  Having dumped those items on my living room floor, I went back for the bike.

I selected a Cervelo R3.  It was the first bike they'd suggested when I told them what I was looking for and, although the price tag initially gave me pause, it was love at first ride.  I kid you not, riding this thing is the bicycle equivalent of being greeted by name by my waiter at a Michelin-starred restaurant.  I test rode a few other bikes long enough to convince myself that it was okay to own a bike worth more than my car, and then closed the deal.

A thunderstorm hit shortly thereafter, so I wasn't able to go out for a ride today, but I did spend the rest of the afternoon trying everything back on, playing with my new GPS computer and figuring out how to get in and out of the clipless pedals without breaking my neck.  If it's sunny tomorrow after church I may decide to have a two-wheeled devotional out on the bike trail...
Posted by JJD at 10:26 PM

Email ThisBlogThis!Share to TwitterShare to FacebookShare to Pinterest
Labels: Cycling

Yay! I'm excited for you. I'm also disappointed that you didn't get one like this: http://images.jupiterimages.com/common/detail/29/60/23286029.jpg

I do, however, hope that this was among your accessories:
http://www.pashley.co.uk/products/leather-saddle-bag.html

And, for the record, this is my kind of biking: http://tobifairley.com/blog/wp-content/uploads/2010/02/audrey-on-bike.jpg

The dog and the name plate are negotiable.

Congrats! Let us know when you name it! Happy riding... Lady (I remember those rides around the valley in 40mph winds!)