Lest someone accuse us of not being well-rounded in our dining/theater spree, Amanda and I managed to work some sight-seeing into our itinerary.

Our first interest was to see the recently finished renovations/remodeling of Lincoln Center.  Over the last four years the arts complex had tried to undo some of the unfortunate architectural blunders of the original layout, which was notoriously brutalist and fortress-like. The overall effect is subtle but noticeable:  It still looks like Lincoln Center, but it feels more open and welcoming. 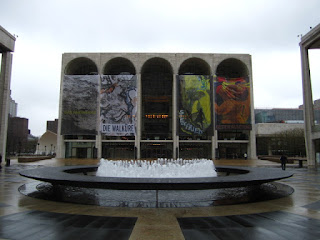 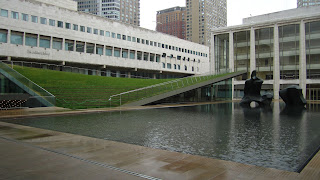 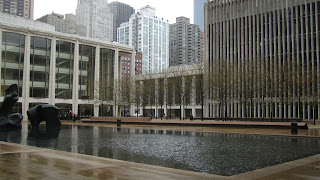 Then, after the opera, we stopped in at Saint Patrick's Cathedral, New York's flagship Catholic church on Fifth Avenue.  Neither of us had visited the cathedral before, and frankly it was a little underwhelming, both because Manhattan's skyscrapers have a way of dwarfing anything that isn't a skyscraper, and because both of us have seen much more impressive cathedrals in Europe and South America.  Even so, the interior still had that wonderful visual updraft that is the hallmark of gothic architecture.  And it was neat to see the preparations for Palm Sunday. 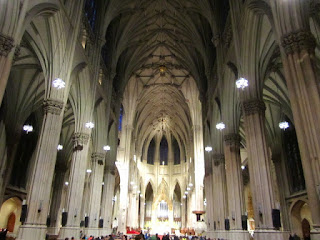 Looks as rainy as when we were there. Lady