The retired space shuttle Discovery is being transported today from the NASA space center in Florida to the Smithsonian's Udvar-Hazy Air and Space Museum out near the Washington Dulles Airport, where it will replace the Enterprise, which is currently on display but never actually went into space.  (You may remember it from last fall, when I wrote about my visit there with Dad.)

The giant shuttle is perched on top of a modified jet airliner that made a crowd-pleasing detour over the National Mall on its way to the landing spot in Virginia.  Given our proximity to the Mall, the firm's rooftop terrace was a prime viewing spot for the fly-over.  Unfortunately, the shuttle arrived slightly earlier than predicted on this morning's NPR report, so I missed the best shots -- but I did manage to get this bit of footage before it moved out of sight.

One of my colleagues got to the roof earlier than me and was able to take these shots: 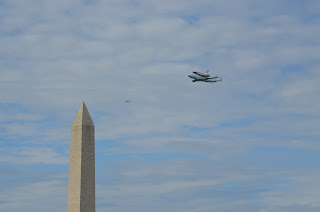 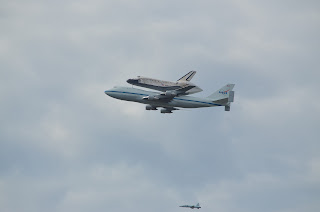 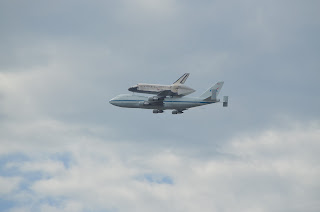 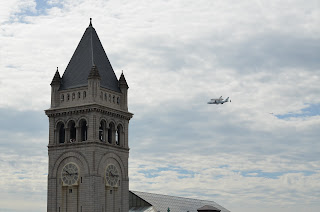 The Washington Post also has a bunch of good photos and video.  Here's a clip of the shuttle near Dulles:

How great! You don't get to see that everyday. Now you won't see it any more...Lady