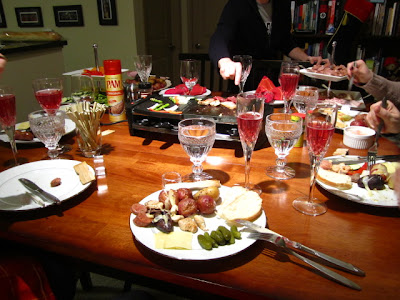 Raclette is a type of cheese from Switzerland and the Savoy region of France.  It's generally eaten melted over baked potatoes and grilled meats and vegetables.  It sometimes takes the form of street food in Strasbourg, but it's more commonly enjoyed as a convivial meal among familiy or friends gathered around a central electric grill.  Each person gets a little cheese tray that goes under the grill and melts the cheese while the meats and vegetables cook on top.  Once the meat and veggies are done, you pull them off the grill onto a bed of fingerling potatoes and then pour your bubbly cheese over everything.  It's delicious. 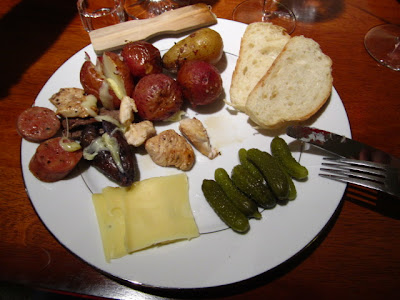 The first time I ate raclette was back in 1999 when I was a newly minted missionary in Mons, Belgium.  The Bompas family had a habit of inviting us over for dinner and feeding us extraordinarily well.  If there was any doubt in my mind as to whether Belgium was the place for me (and let's be honest, there wasn't), it wouldn't have stood a chance against Sister Bompas's raclette (or her endives au gratin, or her chocolate mousse, or -- well, you get the idea).

Since returning from Belgium, I hadn't eaten raclette until three weeks ago in Strasbourg -- and I feared that a similarly long stretch might run before I ate it again (I don't have a grill, you see, and I've never been able to find one in the U.S., although this puts me in a mind to try again).  So I was thrilled to discover that a guy in the ward had a raclette grill that he'd brought home from his mission in southern Germany.  Naturally, I invited myself and two other couples over for a raclette dinner party last night.

The dinner was nearly a disaster.  Turns out, the Nevilles were providing everything BUT the cheese, and the person they'd asked to bring the cheese was over an hour late (and, when he arrived, had only brought a small amount).  No one had been assigned to bring cornichons.  !!!  Imagine having "raclette" with gruyere and no cornichons.  Might as well sit in the corner and give yourself paper cuts all night.

A near disaster, however, is not a disaster -- and in this case it was a great success.  You see, I have a rule of thumb when it comes to dinner parties that have any sort of food assignment or pot luck element:  I always identify the thing (or things) that are crucual to my enjoyment of the dinner, and then I make sure that I have total control over those items (whether I'm invited to do so or not).  As far as I was concerned, aside from the grill (which I knew the Nevilles were providing), there were two things that were absolutely necessary for this dinner to be a success:  (1) raclette cheese (because that's the whole point), and (2) cornichons (because without them life has no meaning).  Both needed to be high quality, and both needed to be plentiful.  So on the way to the party I picked up a quarter-round of raclette and a jar of cornichons.

And everyone loved them.  My cheese, which came from France via a nearby artisinal cheese shop, was delicious and more than enough for everyone.  As for the cornichones, the other guests -- who had never tasted them before -- polished off the entire jar with glee.

We ate for approximately four hours, talking politics and religion and other taboo dinner-party topics, and then waddled out into the night -- off to our homes, where we dreamt of cheese and potatoes and tiny baby pickles.
Posted by JJD at 10:51 PM

I love Raclette! A few years ago our ward had a service auction and my roommate bought a dinner made by a guy in our ward. It turns out it was a Raclette dinner, he had the grill and everything. It was one of the most amazing dinners I've ever had! He brought several kinds of cheese for us to try. I don't remember cornichons however. Mmmm!