This week I received a mystery package in the mail:  a small box bearing my address and the Pottery Barn logo but no indication of the sender.  With holidays in the offing, this is NOT the season to start opening packages indiscriminately.  So I sent a feeler out to my family and got these responses:

I pulled out my box of decor and set about hung up my garland.  I bought some red carnations and put them in a vase in the bathroom 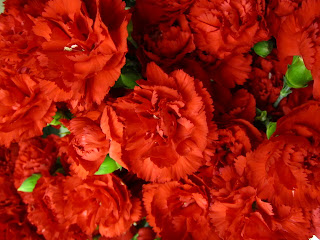 and then a red bow for the wreath outside. 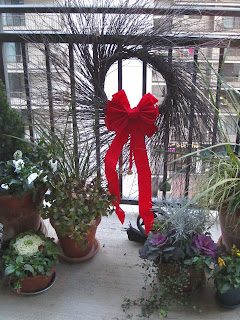 But the tree was a puzzle:  How on earth was I going to fit an entire TREE into my living room without major disruption of the feng shui?  It would have to be a small tree so that it could fit into the corner by the yellow chair.

"Small" was a concept that the Boy Scouts down the street couldn't quite grasp:  "Here's one -- I think it's only a six footer!"  So I headed over to Home Depot where I found an entire section of trees between two and four feet tall.  I inspected three and took the winner to the check-out stand.  I knew I'd chosen well when it fit end-to-end in the trunk of my car.

Once home, I called Lady and set up shop on the balcony for the light-stringing ritual.  I took stock of my inventory of tiny white Christmas lights and sized up my tree:  I had four 100-light strings and approximately four feet of tree.  According to the article by interior decorator Colin Cowie in this month's Elle Decor, that was the right ratio.  But Mr. Cowie hadn't been raised by Lady and is therefore used to trees that cannot be seen from space:  "Eight strings," she said, "you're going to need eight strings."  She hadn't even seen the tree.

But, of course, she was right.  By the time I'd used up the fourth string, I was only about two thirds of the way through the tree.  With hypothermia setting in, I wasn't too keen on running back to Home Depot for more lights, so I tried rejiggering the lower strings to make them go further.  Then I tried plugging them in to see if the tree was passable or completely ugly.  That's when I discovered that talking on the phone and stringing lights might be one task too many:  I'd somehow managed to connect the wrong ends, so that there was no way to actually plug in the dang thing!

The plug snafu provided further opportunity to adjust the distribution of lights and, once I managed to plug the tree in, I decided that it would have to do.  It helps that I have lots of shiny (and now glittery) silver and white ornaments -- they have a way of adding to the brightness of the tree.  How merry!  (And look -- my lamp problem is solved until January!) 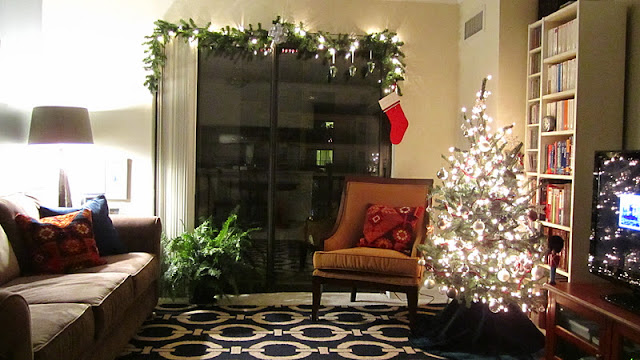 The new sparkly snowflakes are a great addition: 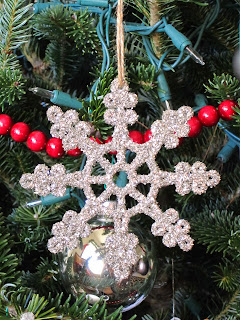 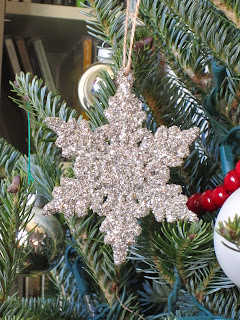 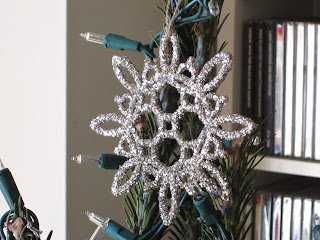 I'm quite impressed that you pulled it off with only 4 strings. Each year my tree gets smaller (as we get more kids and they get bigger... no tree climbing allowed) but each year I buy another few strings of lights. I'm not quite sure if Ammon fully appreciates it yet, but I'm sure the space station does! A wonderful legacy to continue! (oh my goodness, I just used the word legacy and didn't fall off my stool. Write that one in your journal!)