Much Ado About Nothing

I had a hard time focusing at work yesterday.  It was Friday of the first week back after a fantastic vacation, and I had tickets to see the Shakespeare Theatre's production of Much Ado About Nothing.  All I wanted to do was to go sit in a French cafe and read until it was time to go into the theater.

So that is what I did.

I finished my last client call a little after 4:00pm.  The rest of the work I needed to do was the sort that wouldn't require a phone or talking to people -- all I needed was a table and my laptop.  So I headed over to Paul Bakery and Cafe, ordered a sandwich, a beignet and a Perrier, and settled down for a pre-theatre evening of contract drafting (which eventually morphed into reading a novel...). 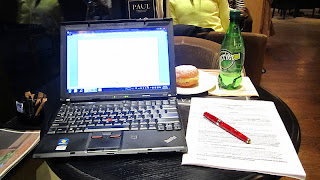 Much Ado is one of my all-time favorite Shakespeare plays.  Benedick and Beatrice have such wonderfully witty lines and, despite the evil machinations of John the bastard, it's a happy and lively tale.  (If you're not familiar with the story, a short synopsis is available here.)  Kenneth Branagh's movie version is a staple in my DVD collection, and I've watched it many times over the years (whatever else may be said for the movie, it will make you love Emma Thompson and want to live in Italy).

Last night's production was a lot of fun, but not great.  The acting, especially among the leads, was very good -- Benedick and Beatrice were wonderful, Don Pedro very strong and princely, and the constable and his neighbor downright hilarious.  The directing had some nice moments (the physical comedy and visual gags during the love plots were very funny) but often seemed derivative of the Branagh movie (for example, Beatrice splashes in the fountain the same way Branagh's Benedick did; and the Don John seemed to be channeling Keanu Reeves.)  As for the set -- it was awful.  The Shakespeare Theatre has a tendency to do over-the-top sets, and this was probably the worst one I've seen.  There were enough plastic flowers in that villa to stock a funeral parlor for a month! 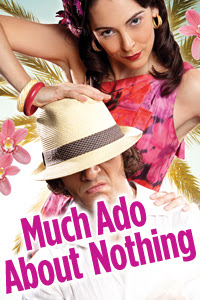 Paul's and Shakespeare and reading in a cafe for an afternoon?