We only have two full days in Puerto Rico.  Since we spent the whole first day eating food and touring the old city, we devoted all of today to the beach.  Well, to the beach and eating food.

Puerto Rico is home to many famous beaches, including the celebrated Playa Flamenco -- reputed to be one of the best in the world.  Unfortunately, we discovered that getting to Playa Flamenco is not so easy.  Instead of risking unreliable ferries, we decided to stick to the beaches near San Juan.

Playa Condado won.  That's partly because of the glowing reviews in the travel books, but also because that's where all the fancy hotels are.  We took a taxi to one of the biggest and fanciest, walked right through the lobby and took up residence in their beach chairs.  It's amazing what you can get away with when you act confidently as though there's nothing suspicious about what you're doing.  (That and the fact that, as mid-thirties white Americans, we fit completely with the clientele.)

When we arrived at the beach, the sun was out and we felt optimistic about a glorious day at the beach. 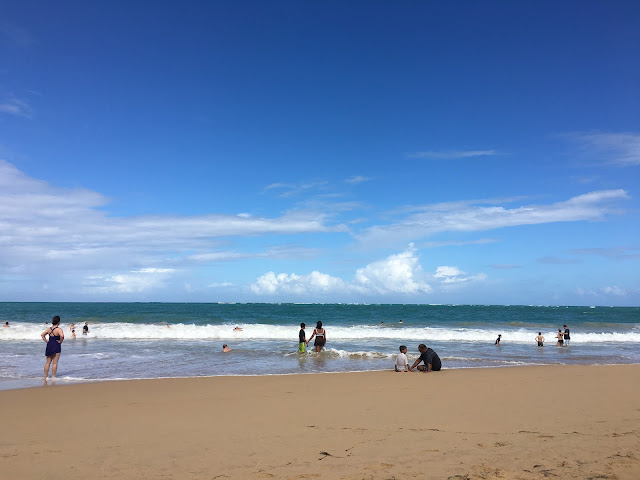 We pulled out the selfie stick long enough to prove that we'd been to the beach, and then settled in for some serious napping/tanning/reading/swimming. 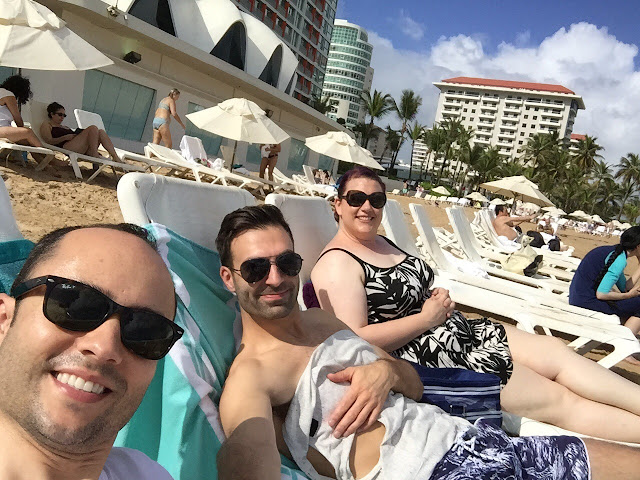 With only a single day on the beach, we took it very seriously.  Started a little before 10am; we told ourselves we'd check in again at 3pm.  In the meantime, we had snacks to keep us from perishing. 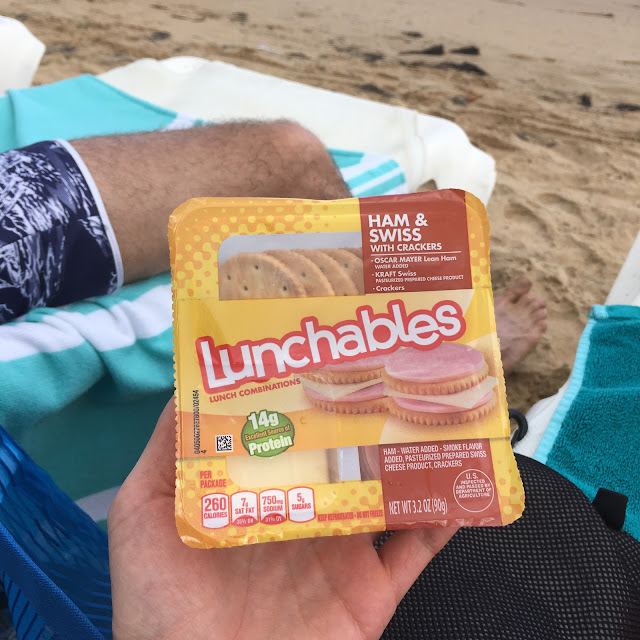 Unfortunately, the glorious morning weather did not continue.  Soon ominous clouds rolled in . . . 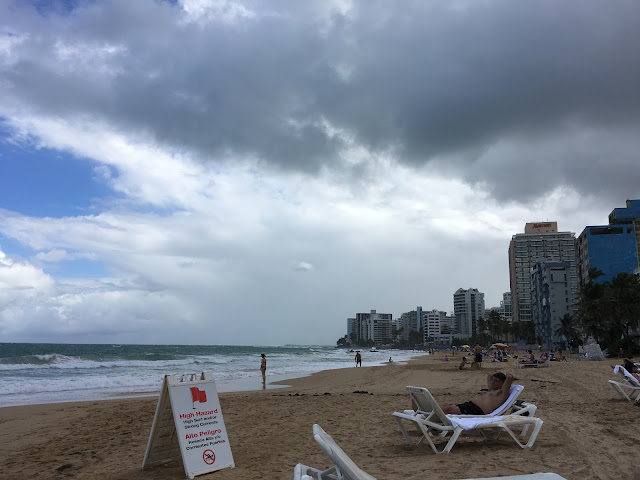 . . . bringing rain and wind with them.  At least, that's what Amanda and Justin told me when I came back from a bathroom break and expressed my relief that it hadn't rained on us.  They gave me this photo as proof of the tempest. 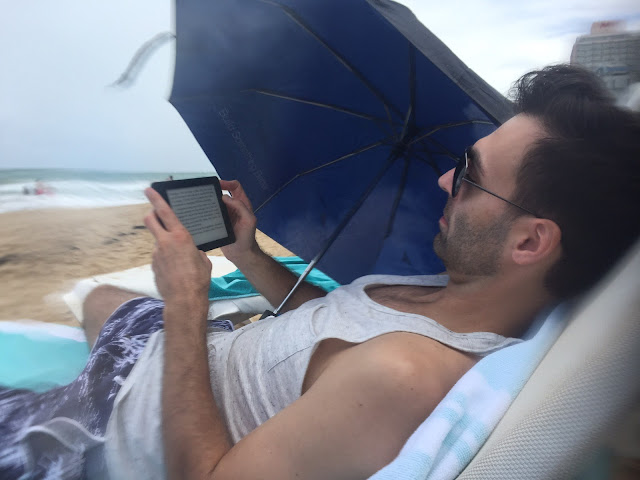 But island weather is changeable, and before too long the clouds had departed.  The afternoon sun made the beach perfect again. 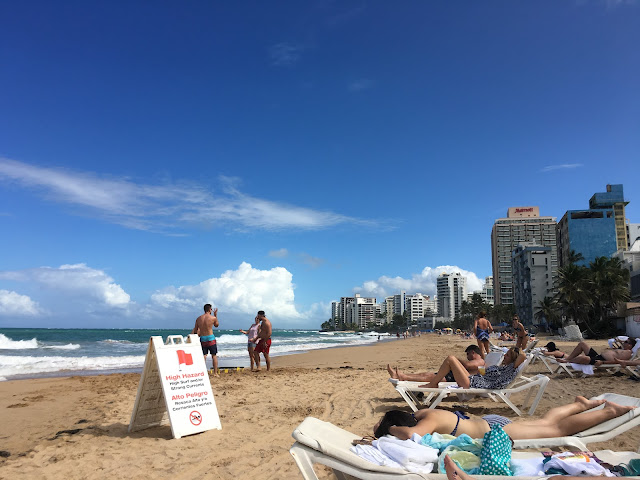 Three o-clock sounded and we had a decision to make:  Do we pack up and head back to Old San Juan for a 5pm reservation at a place we'd found the night before?  Or do we hang out a while longer and take our chances with restaurants in the neighborhood?

We looked at the lengthening shadows and our sun-kissed faces and opted to stick with our original plan of returning for an early dinner.  It's a good thing, too, because by the time we got to the restaurant everyone was starving. 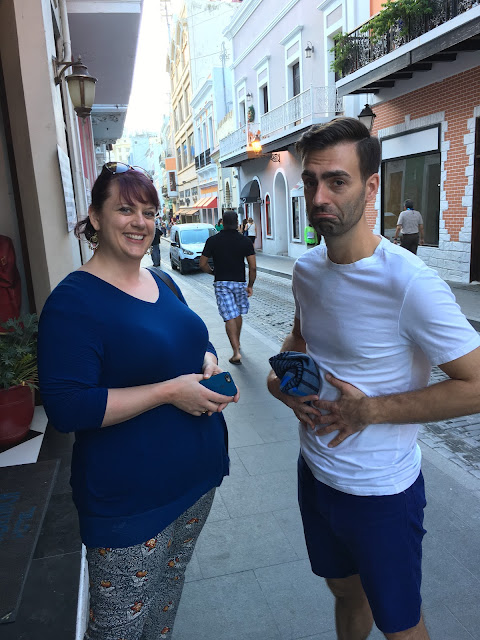 The place is called Marmalade and had been written up in pretty much every guidebook we found.  When we passed the night before and inquired about their availability, we learned that they had openings only at 5pm and 10:30pm.  Taking that as a good sign, we booked it. 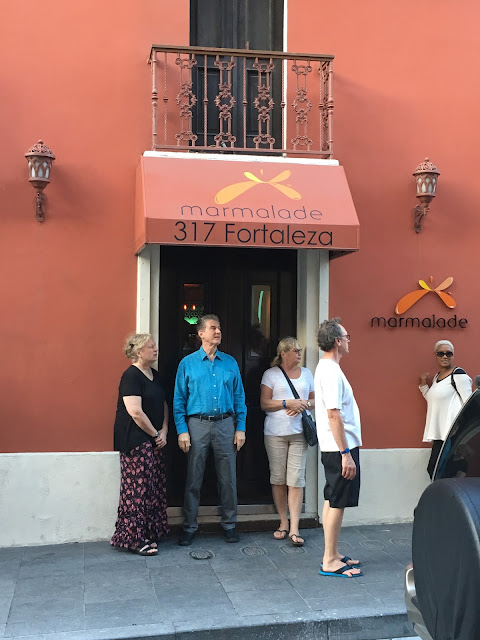 The main appeal for us was the fact that they offered only prix-fixe tasting menus.  Each person could choose between 4 and 6 dishes that would be served in successive courses through the evening.  We pored over the menu, delighted that nearly everything sounded tempting.  Eventually we placed our order and watched the dishes roll in.

The dinner was superb -- the first truly remarkable meal we've had on the trip so far.  The flavors were subtle and interesting, the portions appropriate, and the service and ambiance excellent.  We left happy that we had kept the reservation instead of staying longer at the beach.

We took advantage of the warm night to walk down to the port where the cruise ships dock . . . 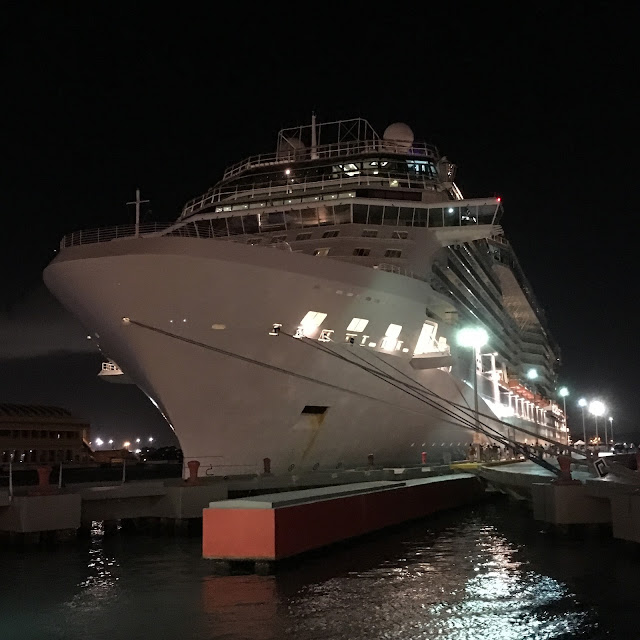 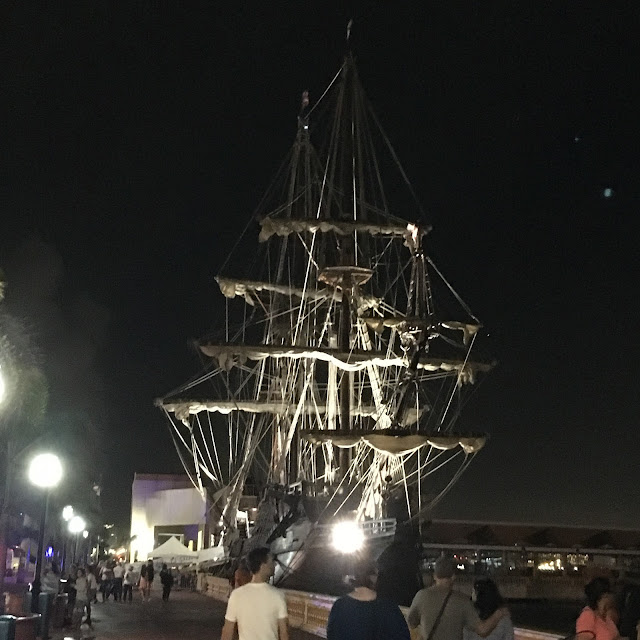 We passed the government building we had seen the day before, noting that it showed to much greater advantage from the waterside, where we had the perspective of the hill and neighboring buildings. 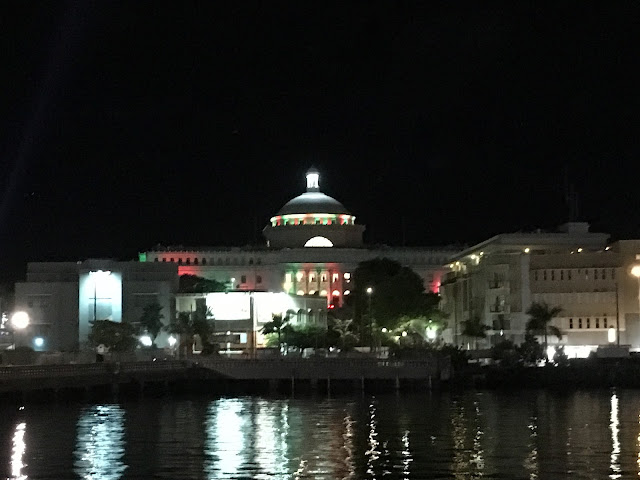 Crossing a small bridge, we found ourselves in the midst of a Christmas-themed carnival called "Navitown". 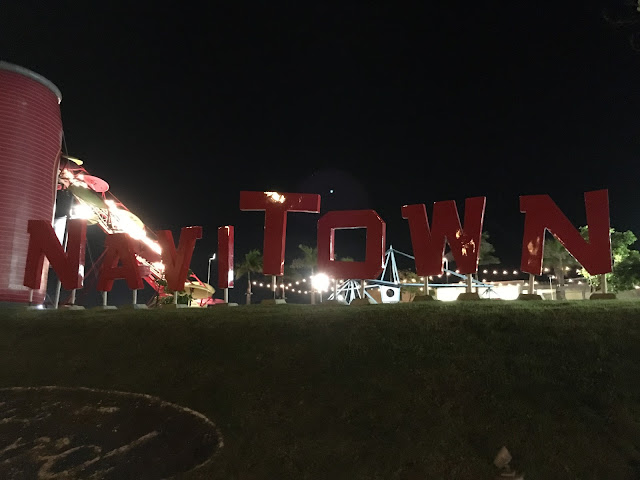 With lights and rides and blaring music, the first impression was of a garish state fair.  But as we wandered deeper, we noticed the festive feeling and all the local families gathered for evening fun. 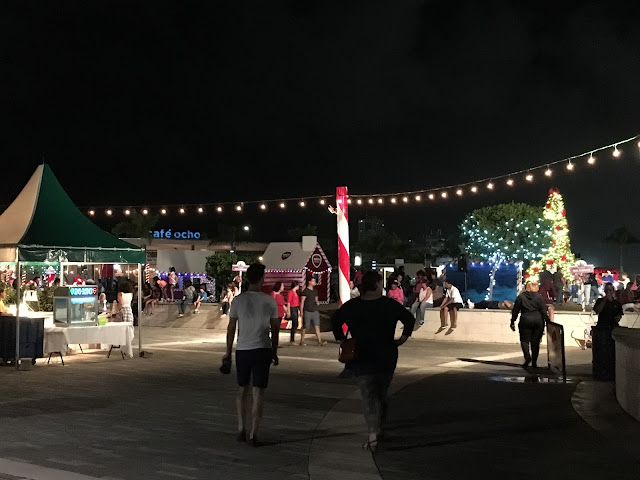 There was a loud, incomprehensible announcement over the loudspeaker, and suddenly we found ourselves in the midst of a parade route.  The speakers blared the Mission Impossible theme song, and a troupe of insane elves scurried down the street pulling wagons laden with props. 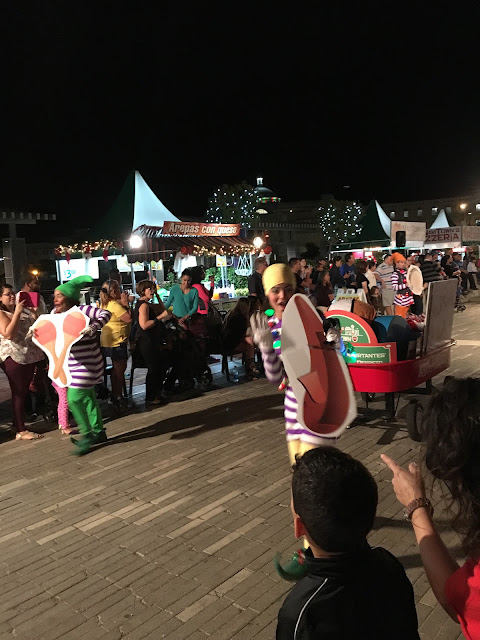 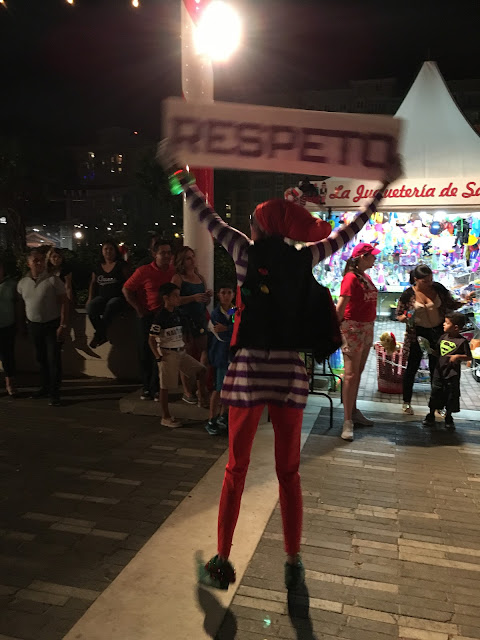 Then, without warning, the heavens opened and torrents of rain came sheeting down.  The crowd fled for cover, and Amanda took shelter beneath her Macintosh Square . . . 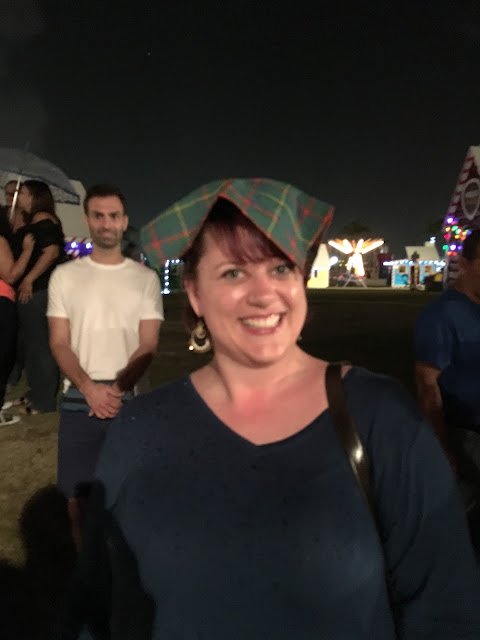 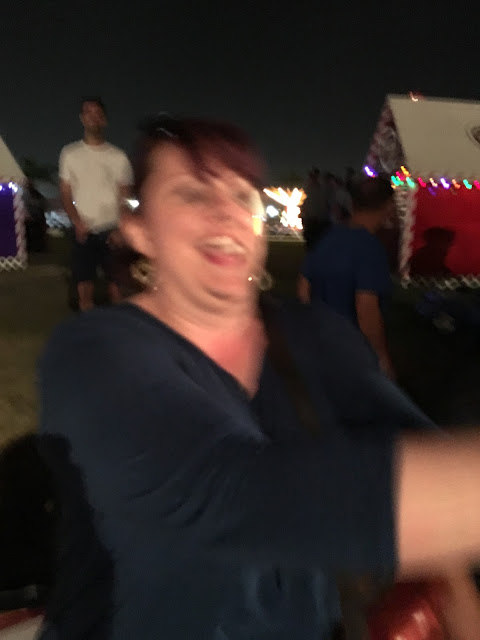 . . . we too joined the crowds beneath the pavilion (leaving, I assume, the poor crazy elves to dance by themselves). 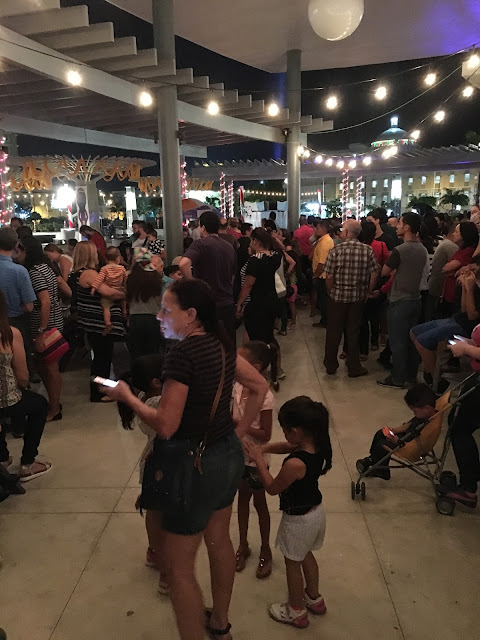 Fortunately the party had only begun.  Music continued to play loudly from the speakers and Justin had flashbacks to his days on the International Folkdance Team at BYU.  We managed to persuade him to give us a show:


Eventually the rain stopped and it was time to go home.  We picked our way through the puddles and down the now-abandoned streets to the condo building, where we reveled in the air conditioning and began to pack for the next part of our trip -- in the morning we fly to New York!